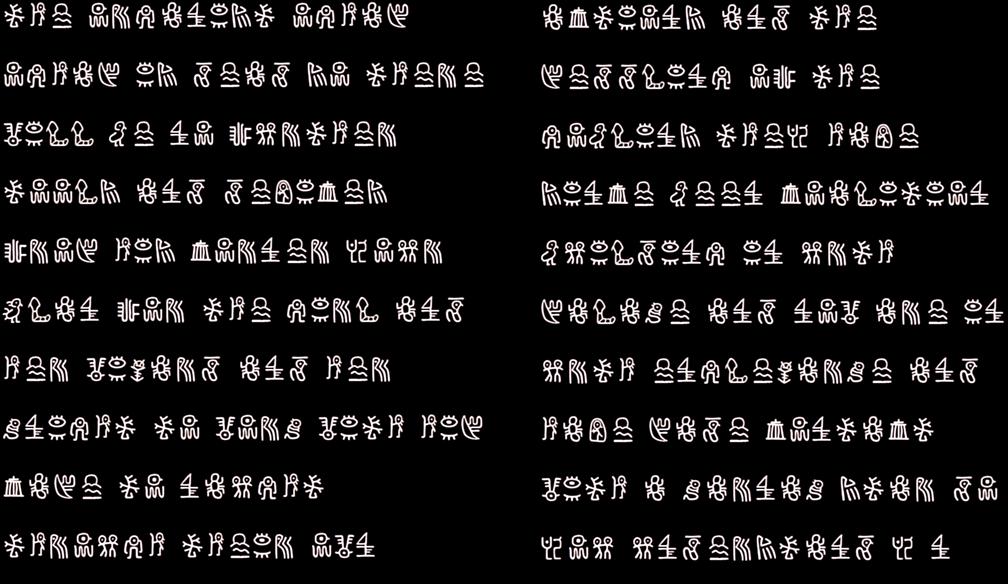 (The code discovered by Heremod, made by me from Yorda's language in ICO.)

I am a little bedraggled today: either the allergies from Sam & Tracey's are lingering (I should have taken some antihistamines!) or I am coming down with one of the haunting drips Sam & Tom were fighting off at the game last night. The session was a little bit odd; I keep experimenting with format & little tricks of storytelling. Luckily I have players that are willing to bear with me. This session James didn't get to play Balthazar, his character, at all. I warned him ahead of time & had him play Tracey's character's (Lorelai's) twin brother Legend. Tom was left out in the cold! He did have some one on one time with the Narrator, but then sort of found himself Obfuscated (invisible) & stuck in the middle of a political & philosophical argument. Still, that being said it was a lot of fun; I brought some sake, James brought some excellent beer (both based on his character theme-- a "Balthazar" beer & a growler called "Left-hand"), Tom handed out Samhain gifts, & Tracey made squash soup. Killer soup. Then we began the session, starting with the group having split up last session... 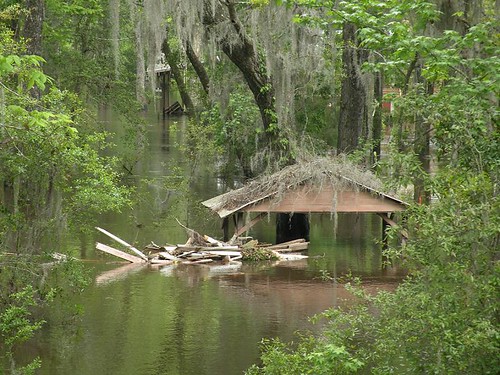 The first segment of the story was Lorelai & Legend going to speak with their mother in regards to their dubious parentage. Legend, Lore, & Damocles set off to Fendowns, the fisherman's suburb where Lore & Legend grew up, only to find the homestead...flooded! Someone having dammed the river to make what they later heard is a pleasure lake for some big-wig's palatial estate. Lore & Legend were a little bit agast; Lore wanted to swim out & investiage, but a pushy, almost authoritarian Damocles tried to stop her. She evaded him & went out-- it looks like the home had been abandoned in time. So after going to the nearest high-ground, they found a friendly family from the past (currently boarding Mermaids, the revolutionaries, in sort of enforced civilian barracking) that their family had gone to the city Breenhart. Eventually they did find Lore & Legend's step-father, Cliven (played by Tom, who can sure do grizzled). Damocles & Cliven stepped outside, & Lore & Legend spoke to their mother, Julimoor. She told them that their father was an "angel," who came out of the sea while she was on an atoll, skin the colour of polished driftwood, hair like threads of gold in a mane about his face. Something about his name being Haile. & that they may very well be young-- very young. That they matured very fast, speaking at just a few months old, so Julimoor just started moving up the time table on their birth.

Then it was Heremod's time to shine! Tom & I had gamed a little bit over email, which I'll excerpt here!

You go off to speak briefly with Lorelai, advising her with the cautious council of the grave; when you return, you notice that Balthazar has engaged the Generalissimo in a vigorous debate about philosophy, & the Generalissimo has dragged out some kind of device & is gesturing towards it with his pipe stem. Balthazar clearly seems to be making a distraction with the intention of covering the snooping he assumes you are off doing.

The Generalissimo's tent is, you quickly realize, somewhat of a ruse; the interior of it is set up with food, seats for receiving, books laid open with paperweights, scrolls & maps pinned to hanging tapestries. It looks warm & inviting; the four post bed in the corner is tousled & shows all the visible signs of having been slept in, but for all those details-- details that might fool mortal eyes-- you are not taken in by the illusion. The bed has none of the smell of sweat & stink of life; the food has been eaten only casually, enough to leave evidence, crumbs, but not the blush of real occupation. It does seem the Generalissimo takes meetings, discussions here. There are maps; maps of the area, of possible approaches. You can see they've laid out in concentric circles the ranges of their heavy cannon, under different powered & ball; that is, how far the can reach with longshots, or with more punishing loads. It seems that the Generalissimo's tactics hinge on a set of reinforcements-- none of his troops are massed overly, & are instead distributed; there are bodies slightly further out, in different emplacements, ready on horseback to rush to either pierce vulnerable spots or shore up faltering defenses. You do note that the Generalissimo seems to be afraid of some sort of Naval conflict; a great deal of details is given over to nautical charts.

As far as you can see, there appears to be a very martial layout; there are no diaries or letters to illuminate what personal thoughts he might have. It seems that the Generalissimo is in fact at least tenuously connected with a web, a network of others. You can't make heads or tails of what exactly, but there are notes, short-hand, marked on certain papers. The symbology isn't readily penetrable; it seems to be a cipher. The strong impression you are left with is something like...the tint of the supernatural. As though the Generalissimo was more concerned with USING the things he might have found then not. (By way of what I mean: imagine that you, the party of PCs, had a map upon which you'd drawn a little fanged figure in the Badlands for Xartrusse, a little Spider in Malake for the idol, a goblin face near Lalala with a train track, a spiky crystal star in Englezarke; it would be difficult to figure out what you meant.) You do discover, based on your studied ascertain that the room is not the Generalissimo's sleeping quarters, that there is a desk, set upon a carpet overlaying wood (like the rest of the tent) that seems hollow to your sharp senses. Moving the desk aside, & rolling up the carpet & tugging the plank out of place, reveals a stone tunnel, under the Forum. 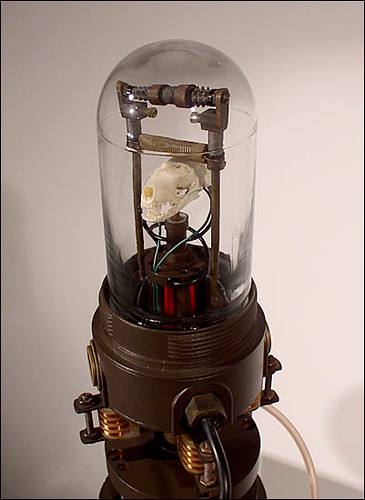 Now Heremod went deeper into the tunnels, evading tripwires, silent as a ghost, until an odd blue glow arrested his attention. Going to examine further, he found a writing desk, the mate of one of the pieces in the Generalissimo's tent. Upon it was an odd glass dome with springs, tubes, & an animal's skull set in brass. Then, laid out very properly, very precisely were three pieces of paper; two (pictured above) with printed symbols, one with red ink (blood?) Heremod took out his notes & scribed down copies of the three notes with their indecipherable (well, they later turned out to be decipherable...) script. The small chamber is lit with a three glowing bulbs, broken open & unholy blue. Sniffing them, he determines that the alchemy of their mixture was ignited with a drop of blood, cut on the broken glass. There are four broken lamps, whose glimmer is gone, faded to nothing, & six more unbroken. (I reminded Tom here that Heremod has the Vice of "Greed"...) So of course, he swiped them. This, & some unknown events-- did he trip an alarm? Did a witch discover his presence? Bad luck?-- lead to guards sweeping the catacomb complex looking for him. Using his supernatural powers, Heremod hides in the tunnels for three days, finding them to be large, stretching beneath the whole of the Fora. All the exits he discovers are, however, watched by armed guards. He eventually finds what looks like a sand-collapsed tunnel but sees them instead as rotten, dried out concrete bricks-- digging in, he finds an abandoned set of hallways & a trapdoor that ejects him into the chemical grit of the Fora surface. 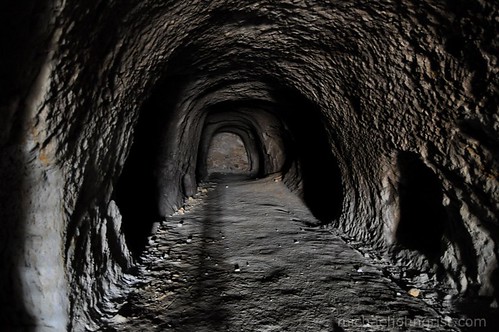 Which is shortly before Heremod nee Bedwin met up with the rest of the party-- or at least, Lorelai, Damocles & Legend. They were on their way to see the Generalissimo, since they'd given their word that they would. My players! So honest & forthright. So honorable in fact that they were appalled to see that Heremod had snuck around the Generalissimo's encampment & both spied & stolen from him. Once Heremod brought out the notes (again, seen above-- the second one was hand written) though, it was all business-- code breaking! Tracey was worried that the largely illiterate Lorelai wouldn't be of any help so she shouldn't help crack the cipher, but I said, & I maintain, that someone who has only begun to read might be better at it than a fluent reader, since they'd have fresh eyes & were use to seeing the symbols as arbitrary. Eventually they broke the code, or translated the text, whichever it may be, & Heremod showed them the glass bulbs. There was a bit where I broke down laughing-- like, taking glasses off, wiping my eyes-- when Heremod tried to explain that the light was catalyzed by blood-- Damocles was like "Do you just go around bleeding into things to see what happens?" or...it was very funny, in the moment. 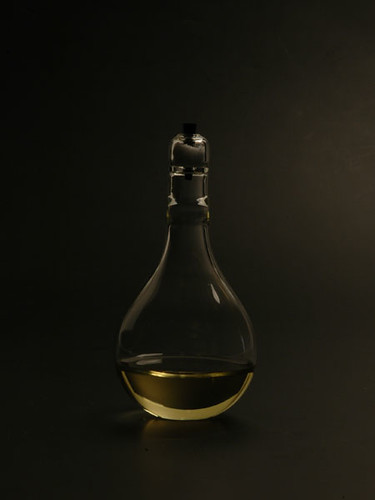 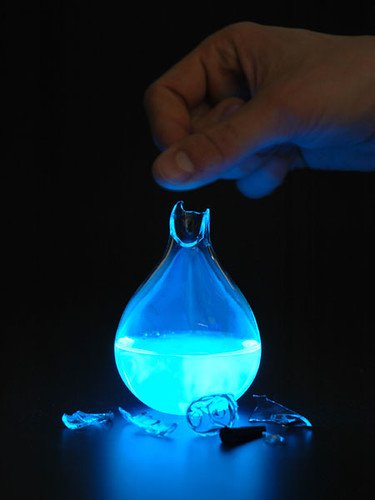 (The alchemical lumenscing bulbs, the latter glittereing from blood shed-- by miket.)

Not wanting to incriminate the party, Heremod slipped into a wisp of fog, dissipating into the tree line. (Of course, he simply followed the others, undetected). Thus, Legend, Lore, & Damocles surrendered themselves to the Generalissimo's men, & were brought to him. They argued largely about politics & about philosophy-- the Generalissimo saying he rather preferred discussing such matters with Balthazar, as he did in the interim session. Where was Balthazar? Why, Xenobia the Witch had taken him to the Black House, wherever that might be. Why, it is the place Seraphina, who Lorelai knows as Granny, dwells anon. Well-- still they talked, trying to suss out viewpoints. At one point Lorelai provoked him into calling saying the people of Englezarke were "like animals!" which was perhaps telling. Then, amidst their bickering, he bid them adieu, & retired to continue the conversation in the morning, keeping the players as "guests."

My Horizontal Life by Chelsea Handler.

Linotype Sabon
is the type face of this book.
Ketel One is hers.

I like Chelsea Handler. I liked her on Girls Behaving Badly & her Chelsea Handler Show was flat out brilliant for the hot second it was around. Chelsea Lately is fine, just fine, but I've stopped keeping up with it; I only record it during slow television seasons. I picked this up since, hey, I'll read whatever I want to. Besides, commedic essays & memoirs are not usually my thing. I find they still aren't my thing. A lot of the "shocking" things in here might be more shocking to Middle America than they are to me, but at least Handler has a solid sense of humor. Plus, she's honest-- which is a a weird thing to say for someone who lies all the time-- but she's honest enough about her biases. Awareness counts for something! Her adventures with Shoniqua (I assume based on her former co-star Shondrella Avery?) were the strongest parts, to me. This is probably a great gift book. Put it in the correct hands & you'll crack the right person up. I think I'll have Pam read it.
Collapse