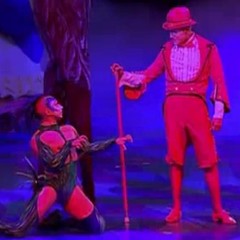 Last night's Television Night really hit the spot! & ended up running later than usual for us old folks. No

fatbutts et al, so it was just me, Jenny,

fordmadoxfraud. I went out to pick up some sandwiches from Brooklyn Bread (remember when I was all opposed to that place? Why? Weird) & grabbed a bottle of wine, too. We cracked into it a little before David & Maggie got there, watching Lara Logan (crush) & John Darnielle on the Colbert Report. Now that is a line-up. When we were all finally present & in our pajamas, we started off with How I Met Your Mother. A nice bit of dwelling on the Flatiron! The problem with that show is that it is consistently funny-- so what can you say about it? Yep, another funny one. Then to America's Next Top Model, notable this week for its guests-- the JabbaWokeeZ, from America's Best Dance Crew, who sadly didn't really bust out the moves. Too cool for school, guys? Still, heavens to betsy, those masks are just creepy as hell. The real neat bit was Jay Manuel in the Cirque du Soliel show "Mystère" garb, floating away on balloons. Anyhow, this cycle of ...Top Model has been really good at putting people in the bottom two who deserve it; who should go, terrible X or terrible Y? Then-- more of the awfulwonderful autotune "...top mooooodel..." song! Anyhow, afterward when I said we should watch Glee I really didn't mean to plow through the whole thing-- just enough to see a song & dance number, get David & Maggie hooked. Well we did end up watching it all. I still am not gonzo crazy about it, but it is a solid show; plus, musical numbers! Frankly any show with intermittent musical numbers would win points with me. David was doing his goofy grin, so I think he liked it too-- also, he had a dream in which, confronted by fifty Boba Fetts, he said to dream-Maggie: "It's okay, I brought my lightsaber." Right, correct answer. After they left, in bed, Jenny told me her totem animal was a chipmunk wearing kohl! Then she said my crush on Lee Pace was only a crush on "Lee Pace With Arms."
Collapse