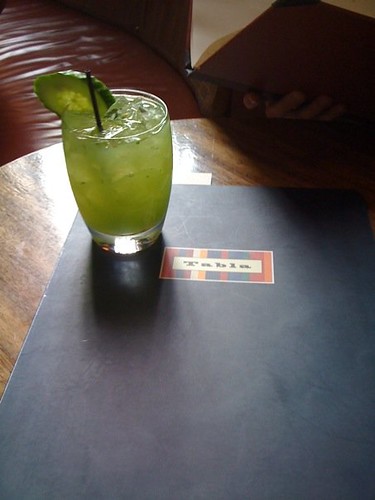 Fairly busy little Sun's day, if you ask me. Of course, it was an old person's version of busy-- since I'm basically antique, these days. The morning was Jenny & me watching Saturday Night Live, which was meh. Not nearly weird enough, & geez, objectifying Megan Fox is gross & so prevasive? Like I mean-- when everyone was gonzo crazy for Angelina Jolie at least she was a huge weirdo & there was plenty to talk about besides how "hot" she was. This Fox thing is just creepy, at this point. The digital shorts on the other hand, while still trading on her "hotness", were both odd enough to be kind of hilarious. Oh, & U2 was the guest? Somehow U2 is famous? Bono has the most awkward, put-upon stage presence. Like your grandpa trying to show you how "Tommy Yorke does it." Ick, stop it Bono...stop it. Then to the train, for our rendezvous with

onatopofthings. The trains were sucking. Seriously, the night before I had train magic. Fs pulling in to the station as soon as I hit the platform. Ryan & others had talked about trains being awful, but I only sort of believed them. Well, the D train made it a reality; partly because the conductor sucked so hard-- the train ran local instead of express, which sucked in the first place-- then it went express the stop before we had to get off...without telling us. Seriously, the conductor never said the words "express" or "local" or even what the next stop would be. Screw you!

We weren't late though. We were seeing The House of Yes Off-off Broadway. The movie version of it looms large in all our late-adolescence-slash-early-adulthoods, so I for one was quite looking forward to it. Can I be honest? I know Marty was played by Josh Hamilton, but in my head he's played by Jason Bateman. That is just the way it is. This performance was buoyed up by Kaitlin Dale as Lesly & Kyle Warren as Anthony; they were the best parts of the show, from Lesly's horrified faces to Anthony's cheesy come on lines. Jackie-O's pre-Chanel dress was ill-fitting & she just wasn't enough of an anchor to hold the whole thing together. I guess there was some problem with the person filming the production-- she called Ryan an "asshole"-- but I was in the bathroom for that. I never get drama like that; I guess I'm big? Oh & Anthony looked like what would happen if Sam & Gerd had a baby.

Afterward we went to Tabla for dinner. Or really to Bread Bar, the cheaper more casual section of the restaurant. It was only five when we got there, & Jenny was freaking out about it, how early we were eating dinner. To be fair, the place had just opened for the night. Still, whatever! I'll have dinner at five o' clock, no sweat! I was hungry, okay? Alright, let me run down what we had, with parenthetical annotation. I started off with the Kachumba Kooler (Plymouth gin with chili, cucumber, & cilantro-- not kidding around) & I picked the appetizers; squash pakoras (really really good; what you might want fried squash to be like) & the onion rings (in chick pea & cornmeal flour, with cocktail sauce). We also had sour dough naan & tamarind chutney (the mint chutney for the pakoras was better). My entree was...hey, my entree isn't on the menu! I had...lamb & cracked corn? A tiny little carafe of it, & a wheat naan (I'm not complaining, you dig? Everyone else said mine was the best. I guess I'm not cosmopolitan enough to quite get over tiny portions. I did like it a bunch though). Jenny got the pulled lamb & mustard-mashed potato “Naanini” which was my pick for best in show (also, it had a spice that crept up on you till it shouted in your face). Ryan got the chicken tikka, which had some really appealing greens (though I never really like tikka-- I always wish it was a curry. It is my way). The waiter (who was hilarious, like a giant Andrew or...I just kept cracking up at him!) brough Jenny & Ryan special tastes of special beers to match their meals. Envy! That is what I get for ordering & paying for a drink! "Enlightened hospitality," Jenny whispered. Dessert was brown sugar shortcake with brandied blueberry compote, & vanilla clove ice cream.

Then at home we watched an episode of Castle (also known as "Nathan Fillion is charming, why did Firefly get canceled") then Jenny wanted to watch Flash Forward but I wasn't feeling it. I was tired, an hour is too much commitment. Good thing too-- we discovered Current TV. I knew it existed, since I'd seen "That's Gay!" clips from the InfoMania show, but with DVR I never flip through channels, so I'd never remembered to look at the actual line-up. Which is...weird? & Crazy? We ended up recording tons or shows from it. Al Gore apparently invented a television channel which is awesome? InfoMania is like another sort of Best Week Ever; a run-down show of media critique, which is exactly what I want from television. Then they have a Rotten Tomatoes show? & an animated news parody show? & all kinds of other craziness. We kept saying it felt like we were drunk & wired on caffeine at four in the AM, & that in the morning we'd think it was all just a crazy dream. Seriously, what? What?! 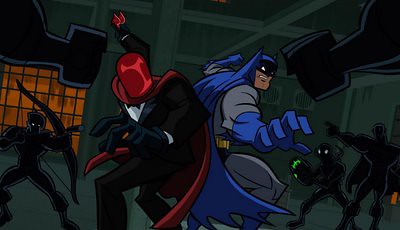 I kind of frequently argue with

kingtycoon about Batman. He gets Superman-- I mean, we'll both agree that Superman is the best-- but he doesn't "get" Batman. Or at least so I maintain. Central among his critiques is that Batman should really kill the Joker. Well. He also doesn't agree that Batman undergoes obvious shamanic transformation from man to super-man when he dons the cape & cowl, which to me fundamentally shows that he doesn't grasp the real impetus behind The Bat...but then, he grew up reading comics in the 80s & 90s, which I missed out on, to my luck. Anyhow, I want to address the Joker issue. I'm going to say something that...well, it isn't in my real world ethos, probably. I'd be a lot more free with my executions. DC comics, though, has it written in the bedrock of the universe: thou shalt not kill. Least aways, not Batman or Superman. Wonder Woman may be showing the cracks in it, & Marvel may have killing as a moral choice as a strength (whereas in DC the answer to "Should Batman kill the Joker?" is always, always no). As an aside, too, I think the position that "Batman shouldn't kill the Joker, only the State has that right" is a wrong question, since I'm pretty sure that Joker would get the death penalty...anyhow! Ethics of corporal punishment & mental health aside:

The Joker should be redeemed. Okay, first off. I get that the Joker is too good a villain to ever be really "made good." & I get that the Joker, as an embodiment of reckless, random evil, is too good an archetype to just go away. I get all that, but hear me out. In a sort of "Whatever Happened to the Caped Crusader?" end of the line story, a redeemed Joker would be the best punctuation to the Batman's argument. I want Joker to get better. & not only that! I want to take it to the extreme. I want the Joker to get better...& then cure cancer. He's like the crazy chemistry genius, right? Instead of Smilex, I want Mister J to repent, feel remorse, & then do something that outweighs the evil he's done. I mean-- what does Batman always say? "One life. If I end his life, how many hundreds-- thousands!-- will I save?" I want the answer to that question to be that, by never caving (hahaha, Batman, "caving." Like the Batcave!), Batman saves millions-- billions!-- of lives.

I looked at this at

primroseport's recommendation; I never would have otherwise. I just don't mine my ideas from books like this, & a lot of the advice in Narrator guides like this tend to be fairly obvious. This still bends a little bit that way, but does follow the absolutely stellar gem at the core of the "new" World of Darkness-- not having a canon. Now, I wasn't a hater of the "old" World of Darkness metaplot, since I can discard & use whatever I feel like, but I have to admit that the new flag they sail under really warms my cockles. There are quite a few ideas in here that say "scrap the whole shebang from Vampire: the Requiem & try this on for size," like "Damnation" in which every Player is cursed by God/Devil/Kali/Whatever, individually; various "Clanless' pitches, The "Other" where the Beast is replaced by a sociopathic evil, & the most compelling: "Monster Garage" where you strip the character down to just Power, Finesse, Resistance & Vices-- Sloth operates like Obfuscate or Resilience, Pride like Majesty or Dominate, etc. There are chronicle-as-setting ideas, like "Bottle" where they say "put the bloodsuckers in prison! or on that Lost island!" There are even a few that sort of explode the meta-logic of play style, which you know I dig on; "Solo" is basically the "snapshot" style of play, writ large; "Generational" suggests an Ars Magica style elders/neonate level play. Interesting; something to flip though for ideas, to refer back to for new takes when you have an idea.
Collapse