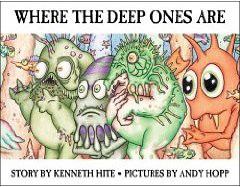 Where the Deep Ones Are by Kenneth Hite & Andy Hopp.

...& with strange aeons
even death may go bye-bye.
"Bing! Please turn the page!"

I'll put these two together, since I got them together & there are alike in intention. Both are children's stories set in the Lovecraftian milieu. Baby's First Mythos I kept for potential future starpawn of star-Mordicai; the most charming thing about it is that it is done by a father/daughter team up. Where the Deep Ones Are is a telling of "The Shadow Over Innsmouth" in a Where the Wild Things Are style, & that one I gave to Alicia for her birthday! Though I did sneak & read it first; used book! Tainted! Anyhow, both are super cute & important; as Baby's First Mythos says, the Whatley's had to start reading some kind of primer when they were little, right?

There was a DnD Summer Camp? Almost as good as my Batman Scouts idea. See, Batman scouts! You learn stuff like rappelling & boomerang throwing, chemistry & riddle solving, all kinds of skills that Batman uses. Basically because I have fond memories of the first half of my Boy Scouting time, & since

handstil brought it up in regards to Sir O. wanting to be one, I was thinking about it. Really, their whole "gay people are evil. Also, agnostics not allowed." is just too damning; I can cope with not wanting to be co-ed, maybe, but yeah. Anyhow, there doesn't seem to be a very good Boy Scout substitute program? & anyhow, if there was one, I fear it would be wimpy. Anyhow, DnD camp! How hilarious is that for existing? It sounds pretty awesome too, from the review.

onatopofthings's birthday! The latter of which had come to town (on a jet plane). I gave Ryan a bobble-head bith cantena musician-- Jenny invented the bobble head idea, but I had to nix her wanting an ewok. An ewok! The more obscure a Star Wars character, the better (until you get to Jodo Cast, which is when it flips back). Jenny didn't come to Alicia's party (I got her Where the Deep Ones Are) but she did make the macaroni & cheese for it! Pot luck. I have to say, potlucking seemed to work out pretty well! Maybe when we finally have an actual housewarming party, we'll do that.

kromelizard also made macaroni & cheese, & we were hoping

fordmadoxfraud would make his Guinness & mac, but no dice. Movies were the order of the night; first Lost Boys, with me shushing everyone so grandpa's line could drop; then since

skycornerless had never seen Ghostbusters (!?!) we dropped that in. Got home about midnight, which wasn't too bad.
Collapse