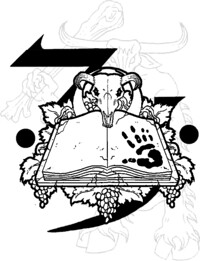 I really had planned on going to bed. I got in, all cozy, I finished my chapter, but then I just got all impish. It really wasn't helping, & Jenny said I should occupy myself, which is probably true. If I was to lie in bed, I would just twist & turn & be annoyed. So instead maybe I'll flutter about the internet, read a little bit more. Feel my forehead: I have horn-bumps! One is from slamming my head into the corner of a cabinet door, but the other is because I have a Loch Ness horn growing in.

Today I went over to Sam & Tracey's to roleplay-- I played a mage from Mage: the Awakening, & while it was fun, since Sam runs a good game & Tracey is really invested in Madison/Phoenix, it did sort of reinforce that I don't like the system. I played a Thyrsus in the Adamantine Arrow: I was all bushy beard & long hair & leather clothes. I was the "Human Animal" & also the perfected Adam Kadmon. I was Abel who had killed Cain. So yeah I had hairy arms like Esau should; I had the hunting axe I used to kill my brother when he came to kill me with his gardening hoe, I had the clothes I made & the Serpent in the Tree of Knowledge as my familiar. No one asked my name! Sam gave us 120 xp to "catch up" & I mostly spent it on attributes, since I didn't know the system well enough to go whole hog; I had Spirit 3, Prime 2, Life 1. James on the other hand played a guy with Fate 5 & yeah, it is just about as broken as you'd think. Seriously though, M:tA, why did you build a flexible magic system then ignore it to fill your book with rotes? Also there was macaroni & cheese with breadcrumb crust.

Pages I have open on Wikipedia right now: