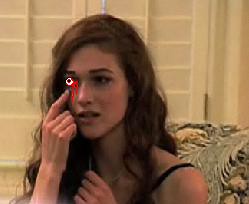 Let me just re-down Top Model last night. "I'm for Jesus!" Oh it is a shame that Amber had to leave, though I'm not really surprised; she didn't seem very stable, you know? Anyhow, anybody that crazy is good television, but she wasn't going to model, you know? Even the tv kind of modeling. & you know I'd never heard of Chanel Iman? She's pretty amazing though. What else did I learn? Well, everyone named Bianca is a whining complainer. Seriously, shut up. I knew they were going to final two her, but I also knew it was just a slap on the wrist. She sucks though. Make overs were boring; sure, Bianca complained, but mostly Tyra just dyed everyone's eyebrows blonde. As for the pictorial...all the girls kind of modeled? Like, they all did things. Okay shorties, show me what you've got. The theme was remaking pictures of them as babies? Which was an inspired idea. Alright, then, down to the contestants worth caring about:

Bloody Eyeball, Nicole. Okay, yes. Tyra & the other Bankable people are clearly trying to capture lightning in a bottle here, shooting for another Heather or Creepy-chan. At first I was skeptical, right up until she mentioned that she didn't have a back pack at school, but rather carried her stuff in a rusty wheelbarrow. WTF, & thank heavens she can model. So, we've got our requisite weirdo for us other weirdos to vote for.

Rae. Rae is this season's "I have a baby back at home," which oddly enough is usually wedded to the ability to take pretty amazing photos. She's pretty, she looks like the girl from That 70s Show, & she's blonde, but for all of that she seems reasonable & likable. I'm okay with being in her corner. Definitely the best picture of last night.

Lulu. Lulu is gay, which Miss Jay outright clapped for. She's solid, & adorable, & has that awkward, naive charisma that could go far. She's got her girlfriend's name tattooed on her chest, but giggled & said she could always have an ink artist turn it into "Brooklyn" instead. Lulu, you are alright with me.

Laura. The Cowpoke. She grew up poor, on a farm, grandma making her bras by hand. On top of that, when the Judges coaxed the details on castrating bulls out of her, she threw "boys don't cheat on me," as a cherry on top. She sure ain't pretty when she cries but she's got pretty good chops; I can see her sticking around. She's not that boring, in persona or look.

Sundai. I figured it out: she reminds me of Alex. Frankly, I miss her giant swarm of hair, but she's spunky, which counts for something. I don't know if she'll turn it around, but I am charmed by her.

Jennifer. Whatever, too hyper, but she asked the photographer if she could get in the sand & managed to take a the second-best photo of the shoot thus.

So, Top Model means we had kind of a TV Night at our new apartment. David & Maggie had seen it when they helped us move in, but Lilly was just scoping it out for the first time & said that we were "ballers." Well, alright. We had a little wine, & some lamb & gyro, & some birthday cake ice cream. Not too shabby an evening, & everyone was out at about ten thirty. I slept pretty well, which is a change from the last few nights. 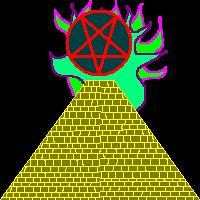 I think about Utopia a lot. Not Dystopia; Dystopia is easy, & I'm not so worried about it. Huxley or Orwell were all well & good to caution, & I'm not saying vigilance isn't needed but frankly I'd rather try to think of a way to side-step all that. I think an (at least somewhat) self-sustaining Utopian society isn't impossible; I mean, you're working against the Ape & against Entropy, but we've got the tools (intellectual, psychological, & biological soon enough) to fight the former & the latter is big enough to post-pone.

This morning the way this was bubbling up in the cauldron of the think-box was Tolkien & Dungeons & Dragons alignment. You know, Tom Bombadil, from my mention the other day, started it. Really the tension in the Lord of the Rings is Lawful Evil versus Lawful Good; tyranny versus monarchy, right? If you phrase it in DnD terminology, you get some fruitful insights into J.R.R. Tolkien's philosophy about the world. Bombadil embodies Chaotic Good; he's a free of control, both having it & being under it. Despite all that, it is clear that, without the hedge of Gondor & the actions of the Fellowship, Tom Bombadil would fall to Sauron & tyranny. The hobbits are Neutral Good, & fall under the same schema; they are content to live & let live, but when the fire of war threatens to engulf the world, Frodo et al have to join the fight. As for evil, well, you've got the Balrog as Chaotic Evil, just a roving menace, full of power but ultimately not an earth-shaker (well, except literally). You've got Sarumen as Neutral Evil, who signs up with Lawful Evil for the benefits but tries to undercut it when he thinks he can get away with it. It is True Neutral that really shows how Tolkien breaks down the ultimate division between Good & Evil. The Ents. They just don't care. Leave them to their trees & they will let the two sides of Law duke it out. Except...well, when push comes to shove, they pick Good, & it is pretty clear that, Old Man Willow aside, they were going to. That I think is Tolkien's sneak, where he says, like St. Cuthbert, that in a pinch Good is better than Evil. I mean, not that he wasn't saying that in grand sweeping movements, but I think it is that subtle choice that speaks most convincingly to his argument. Of course, there aren't any Chaotic Neutral or Lawful Neutral people in this argument-- Tolkien doesn't care about those latter additions-- but if I had to stretch maybe the ghosts of the Paths of the Dead are Lawful Neutral, & I don't know for Chaotic Neutral.

From Asgard to Valhalla by Heather O'Donoghue.

I learned the spells of
The Elf-wand, Grey Wanderer,
Odin Mithrandir.

Good old Odin; best of the gods because he took it on himself to get those 20 levels of wizard on top of everything. Between Odin & Athena you'd be hard pressed to find any better Western deities. Anyhow! This books is divided into two parts-- well, really three, if you ask me. The first is a elaboration on the myths, in their respective myth cycles & sagas, & an understanding of the threads moving between. She dances along with a little microhistory, trying to figure out what things might have meant, understanding their were interpreted through the Christian lens of people like Snorri Sturluson. I found this most engaging; she speculates while letting you know she's musing, sources when she isn't. I might not agree with all her characterizations (like bumbling Thor) but she's got reasons to go the way she goes, you know? The second part (or second & third) is the myths in historical context. I say second & third because, well-- the canny reader has knowledge of the modern, from Nazis to Kirby, but the Romantics et al are a little less known to-- well, to for instance, me. I wish the book was a little fatter with myth, but I was engaged on the ride, & O'Donoghue punches up the aiding misconceptions (drinking from skulls, helms with horns) while acknowledging why someone would want to keep those evocative details even knowing they were false. Oh, & the discussion on how runes go back & forth from spells to alphabet to spells again was nice & pleasing. The talk about Norse myths on Tolkien's Middle-earth didn't really dig deep into Gandalf as Odin-- that surprised me. Still, cover by Alan Lee, which is as fitting a full circle as you might expect it to be.
Collapse