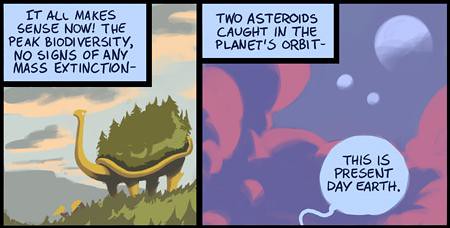 The strange fauna, mega- & otherwise, have been really rubbing a glimmer-spot into my skull lately. On the train I see dwarf elephants-- mammoths, really, with skulls to be mistaken for giant's-- & in-coming boxes are filled with soft-shelled albino crabs, eyeless & claws dripping poison. The skellington's of ravens, crows, magpies, all haunt the corpse's outside my Wizard's Tower; did I say copses? I meant corpses. Oh, I did say corpses. They only glimmer peacock in the ocean of yellow bones; a caught feather fluorescing. That is how things are lately; she sheen of the oilslick, the brief glimpse of that beauty in decay. Outside the world is crumbling, & underneath it the Cthons are gathering for the next assault. The Transcendant Robots on the street are doing their best to keep trouble to a minimum, but it of course isn't enough. The Paper Samurai write their calligraphy spells & their pictogram hexes on their armor, regrouping. The furnaces of the Hellion's ships have burnt off much of the upper atmosphere. Every action brings the dominos closer together, inch by inch; waiting for me to make my move & topple them on down.

The new Brookland fortress is nice; there is still the occasional snarl in the weave, but I just close my eyes & think of my dear girl carrying the fasces of the lictor: Een Draght Mackt Maght. We've been close, lately, that daughter idol of Gotham. There was a little bickering over the image of the skull supplanting the map of the ocean floor, but nothing much came of it. Just a mean-spirited candle! A wil o' wisp acting against me; capricious things! Bundled our robes & such up & laundered them. Laudnumed them. Laundered, I mean. When I came back, Carla & Kenneth were around; they left ice cream that tasted like birthday cake. Then back to harsh dreams; not going easy on me, eh?

The Gloaming Tower across the way has been dissolving all day; I can see it from my window. It started with the Golden Steeple on top; I noticed because the Ghede Zepplin tethered to it jerked & started drifting up all of a sudden. I have these mother of pearl opera glasses lying around from some escapade or another, so I peeked on over at it & there is a slew of Deadly Mimirs gnawing away at it. These boney heads just jawing away. I can't help but think the Skellington Murder (Unkindness?) might be connected; somebody is throwing Osseus megadeath weapons over this way. Which I'm not sweating; rain down your bombs, kids. Ain't been a lich's phylactery I couldn't crunch, force cage or no. So I tuck the curtain back over & get back to my Difference Engine. Clickity clack go the tabulating spider-legs. Meanwhile, I've been...what do they call it, chip-tuning my cellphone. Or is that just when you use it to make eerie music? Well, not that I say it that way, it is all the more appropriate, since that is all I get from it anymore. Stygian sing-song nonsense; like what if Charon was Tom Bombadil? Won't shut up about his golden apples, pennies over eyelids, singing to the gallows tree & his wife the lady River.
Collapse