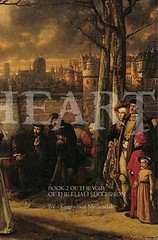 Windheart: the City & the Sea by Kingtycoon Methuselah.

From the sword forum--
From the Physician's Tower--
flow rivers of blood.

The main device of this book is the character Alstacia...& she is awesome, darling, a delight. I've known she was in the wings for some time-- Kingtycoon has mentioned her before, & her circumstances, & she's really the gem of Klial, of the whole setting. As the scholar-nun, she's uniquely positioned to delve into the history & science of the world, without it seeming contrived or ringing hollow. If anything, I think more exegesis is needed; I'm that fond of the trope, or of her, or-- well, what is the difference? Of all the other characters, Iolu the swordbum & Simin the Dascman have their best chance to shine, though Billings & Viviene get fleshed out nicely. Iolu thrives in the scenes he chews up; Simin has an interstitial passage that has some teeth; Billings & Vivien get to go through arcs & have their catharsis of witchcraft. The novel is divided into three parts, & the characters from the first come into their own in the John Hughes "where are they now?" revelations at the very tail end. Irrinzil's framing (Visions of Unfamiliar Klial) only dips in the once: I could do with more of it! A fair bit of the action is left off stage, or in between the pages; you as the reader have to pluck through to find the stings. The final action sequence really has bite to it; it pays off. Read this, & read the preceding book, Raindrinker: the Murderer's March.
Collapse