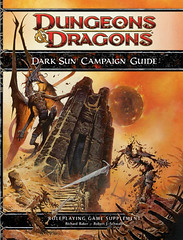 Wizards of the Coast announced at Gencon that their next fourth edition setting was going to be Dark Sun. There had been some rumors that this was going to be the case, but I didn't really believe them-- I mean, wishful thinking, right? I didn't entirely discount them-- some of the 4e staff are Dark Sun alums-- but I wasn't count to count my thri-kreens before they hatched. Dark Sun has the central premise of a post-apocalyptic world, coupled with fantasy. This spins out into something awfully bleak; cannibal hobbits, human sacrifice, dragon kings. Metal is a rarity; everyone is fighting with stone weapons, or weapons made from bones, or chitin-- thanks, M.A.R. Barker. Water is just as rare; you might get a healthy dose of your daily hydration from drinking blood. The sun is always up, always cooking you, always baking. The oceans are oceans of dust, quicksand. Magic defiles the land, sucking the life from it. Everybody is psychic, at least a little bit. Sentient praying mantises. Half giants. Half dwarves (muls). Dark Sun! This is WotC taking a page from the new World of Darkness playbook-- WoD started publishing "limited sets" of new properties (like the forth coming Geist: the Sin-eaters)-- things like Wraith: the Oblivion & Changeling: the Dreaming were critical successes, & beloved by designers, but commercial failures; the fix being if you invest less, or at least, have fewer products, you can get a bigger slice of pie. People might not buy twenty Promethean: the Created books, but they will buy one, or five. I am pleased to see Wizard adopting the same strategy; it gives Spelljammer & Planescape a chance! & beside that, I really do think the fourth edition paradigm works with the world of Athas-- kill or be killed! 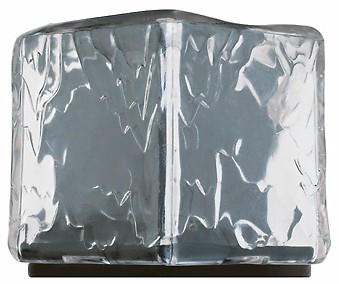 The big news of

fordmadoxfraud's game last night was the Gelatinous Cube. The monster that evolved to fit graph paper! Okay, side bar: it is popular, especially back in the day, to build dungeons on graph paper, with each square representing a 5'x 5' space. Corridors & tunnels would often thus by two squares wide, two squares tall-- the ubiquitous "you enter a 10' x 10' stone corridor." Well a Gelatinous Cube is an ooze that is almost perfectly clear, &...10' x 10'. It just sits in the middle of the hallway & hopes you just walk into it...then it engulfs you & starts digesting you immediately. If that doesn't work, it just inches down the corridor towards you. They are hilarious in concept; terrifying in execution. So of course,

toughlad's character got stuck inside of it for the entire fight. To be fair, Grenfell was trying to rescue Nezh, Erica's character, & he did.

elladorian's Trema (& Geartooth & Fussbudget) was frying the hobgoblins that took that moment to attack,

kromelizard's Kall Tarmin was making illusions of gold, while my character OPERA was stuck on the other side of the cube (having teleported) with the zombie remnants of one of its former meals!
Collapse