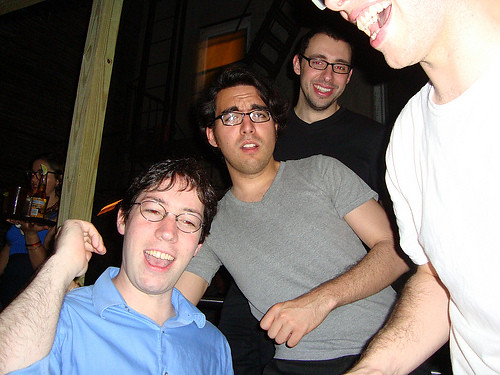 Work was fairly busy last week, since it was the teleconference to end all teleconferences. Still; I got to sit at the Big Kids table three times. Take that! Other than that it has been kind of a laundry list of eating well (by which I mean healthily), not drinking (or not drinking more than one drink), going to the gym (with Jenny!), watching Angel & Leverage (Jenny has been watching the latter for a while & I finally started joining her) & going to bed at a decent hour. I'm respeck-ta-bibble. Some slight change up in the plan now & then, though. Like, Saturn's day I met up with Steve & his wife! Steve from college Steve! I haven't seen him since, well-- college? Though we internet-connected recently & they were in town, so we did the confab. Walked around Union Square, I got a sandwich at...Grey Dog? I think it was called, then you know; more around town, the Strand, Surprise! Surprise!, then dropped them off at the movie theater. A very NYU memory lane. Nice though-- I'm supposed to have lunch with them today.

Then after that bit of biting, there was...David's birthday! We met up at Bar Reis, which is really shaping up into an a-okay venue. The sandwiches in particular are making it more than a marriage of convenience. So yes, ah-ha! David, Maggie, James, & Kevin were there before us, followed by Rico & Christine & Siobhan, Peter & Alicia, Kira & Nino, Carla, & Danielle. I had a martini (with Bombay Dry) & about a million sandwiches. Well, Jenny & I each had four, & one of mine I got a quail egg on. There was playing with fire, & then Maggie's cake-- which was 1" x 1" squares with DnD minis on it. Right on, nerds! So that was a nice time, & I bumped into Ivana's husband Matt there, & Stephanie. Before to long we were home & into bed, though.

Sun's day was a bit of a sob story! Jenny & I had a terse morning-- she was grumpy, I was needy. No fighting or anything, we were just on opposite sides of the spectrum. We ended up watching television together, so I could get enough affection in her legs draped over me & she could studiously ignore me. We ate too; fruit smoosh & yogurt & granola, then arugula & sausage & chickpeas & green beans. Then, just as I was standing in the rain waiting for the bus, I found out game was canceled. Oh savage world! So I stomped back inside & hung out with Jenny a little longer, until she fell asleep, at which point I went to the gym. I was a powerhouse at the gym, too-- did an hour & forty-five minutes, about thirty of which was cardio. When I got home Jenny was just off to Kira's for dinner-- I forgot about that. So I ended up watching Legend & going to look at an apartment mid-way through the middle of it. In bed by the time Jenny got home. Then up in the morning for work-- a curious morning indeed! Curiouser & curiouser.
Collapse