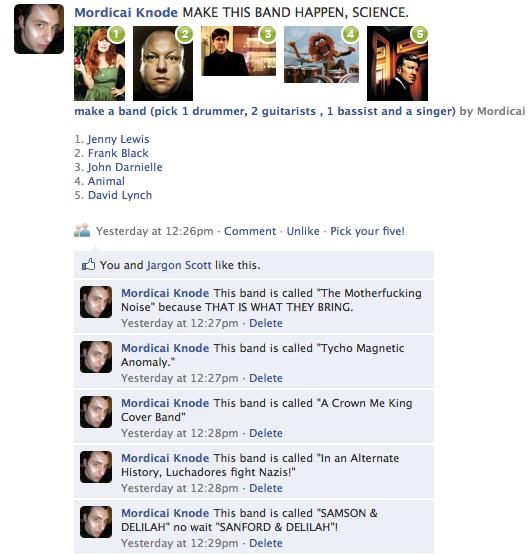 Open to: All, detailed results viewable to: All. Participants: 5

What should this band be called?

& this video of a Star Wars dance-off is...amazing. WTF FTW.

By hook or by crook
the Culture will win. Its Minds
have all done the math.

fordmadoxfraud gave this to me ages ago, & for some reason it fell off my radar. His Bank's reviews reminded me that I meant to shortlist this, so I finally picked it up this week, to be inevitably blown away. I knew I was going to like it, & well, unsurprisingly, I did. It wasn't the novel I thought I was going to read, though! Here is the central conceit of these "Culture" novels: the setting is SF enough that physics matter, but the sentients involved are all advanced enough to have plenty of ways to get around things like the speed of light or what have you. The Culture is the post-scarcity society of humans knocking around the galaxy, some fourteen trillion strong. They've solved most of the problems of society with...well, with having as much of whatever as you might possibly want, & being allowed to do pretty much whatever you want. Integrated with the humans (who are all post-human to some degree; "genefixed" to have drug-glands or swapping genders or what have you) are sentient robots, aliens, & well-- Minds. Minds are hyper-sentient computers-- smart enough that people can't actually understand how smart they are. The main point of the Culture is to...well, to be the opposite of Star Trek's Federation. Prime Directive? No, instead we have Special Circumstances teams infiltrate societies & bring them up to speed until they are ready to join the Culture (if we're lucky, Banks is a Contact agent, prepping Earth for integration).

Well this book doesn't have anything to do with that. Sure, that is all going on, but point of fact is, the main character of Consider Phlebas hates the Culture. Thinks they are a bunch of idiots who have let themselves turn into pawns for their machines, thinks they are a cancer on the galaxy. To that end he's aligned himself with the Idirans-- immortal, three meter tall killing machines in the middle of a religious jihad against the Culture. Not that he cares about their religion; he just wants someone to stop the Culture. He's also a shapeshifter-- not the quick morphing space opera kind, but rather somebody with an ability to control his metabolism enough to digest & deposit bone, muscle, skin-- all that. Well-- he makes his way across a swath of cosmos to carry out a task-- find a Mind lost on a planet off-limits to everyone else. Along the way he meets, you know, the usual suspects. Wretched hive of scum & villainy. All that jazz. The last third of the book is all planet-side, & gets pretty grim. I quite liked it; not the ending I would have chose, but as a setting? A series? I'm definately in. I'll need to get the next one soon. The Player of Games is the next one.
Collapse