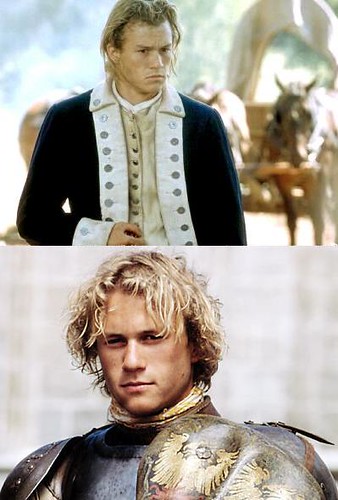 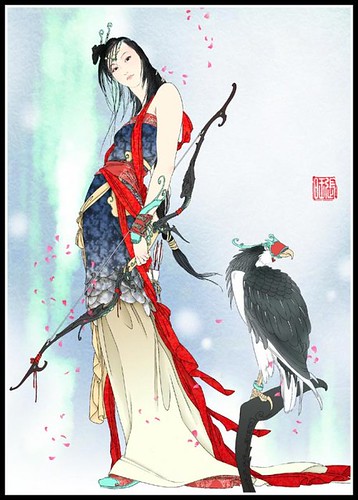 A trick I like to use when building a character is to "dream cast" the NPCs in my backstory. Like you might say "Darth Sidious' mentor, Darth Plagius, is played by Vincent Price." I used it to pretty good effect in Kingtycoon's Tanzit campaign, with Mobley Whist Stonebridge, who had six older brothers, like Tim Roth & Bruce Campbell. Well, Tracey's adopted something similar with her sprawling family, & done a neat little trick too-- as a sort of mnemonic device & as a way to populate the field of characters with alien-but-plausible sounding names. She just sort of crams an actor's name together, or strips of bits of it: so her character Lorelai's mother, played by Julianne Moore, becomes "Julemoor"; Lorelai's twin brother played by Heath Ledger becomes "Legend". It is neat, & to the point: Legend, who'd been talked about from the very first session (when Lorelai, speaking to Deadman Gaspar D'Evion, Brother of Vol-- a ghoul, most of whom come into the world with a stillborn twin-- said that she had a twin as well) finally made his appearance on the stage.

Also come from the very depths: Bedwin Hermóðr! Heremod, pronounced like "pyramid" with an "h" instead of a "p." Bedwin had vanished into darkness nine months ago, presumed dead. Damocles' vision quest was the last we heard of him-- "Help me Damocles!" he cried, & Damocles, agent of Superbia, pressed on. Tom had been punishingly busy with school, but the pressure has let off somewhat! Bedwin has returned...changed. Older, more polite, more inquisitive. Corpse-like in pallor; he's clearly had a brush with death. Calmer & more reasonable; emaciated & ever-hungry. Gluttonous, but gentle, helpful. & he can, apparently, turn invisible.

The story began, after last week's entrance into the Fallen Star with Damocles stuck in a tub of white goo, Balthazar stuck on a crystal chair sucking his blood, & Lorelai sort of off balance with the whole thing. Well it didn't get more normal, exactly...Damocles was healing, with alacrity, but not immediate quickness. (As though under "intensive care," page 60 in the World of Darkness book, though the rules there are kind of opaque about it). Well, Balthazar "talked" to the chair, & Lorelai started to see faces in a puddle of blood (fed by drippings from the ceiling). Familiar faces! Which then disappeared...only to be found later, when Bedwin ran into the room! Lorelai ran past him, Damocles torn between the two, & then Lorelai found Legend & Archer! Archer, a beautiful, silent woman, skilled with the bow & friend to birds. Legend-- the long lost brother.

Legend gave an abridged version of his life up to now, & received Lorelai et al's in return. They last saw each other perhaps three years ago-- when they were semi-voluntarily sold into slavery to defray their family's encroaching poverty: rather than let their mother, stepfather & siblings & half-siblings starve, off they went. Well Lore was bought up by Noble Airvanthe of the Golden Nirvana to be brought up as a courtesan & Legend went off to be a mercenary in the employ of Mighty Navi of the Vermillion Sutra. Mirror-some! Legend, hater of boats & prone to seasickness, took up as a heavily armored lancer, but was forced to mutiny when Mighty Navi stole a jewel of some kind from a temple, & tried to kill his own men to cover the crime up. On the run, he came back to Englezarke...& somewhere along the way ran into the faerie Seraphina. She was young when she appeared to Legend, ancient when she appeared to Lore; she coerced Lorelai out of her blood, & seems to have done the same to one of Legend's ribs. They both believe there is another world where their doppelgangers live: Kore & Engine.

All caught up; they went deeper into the skyscraper sized chamber, filled with these round glass coffins: each filled with a sleeping person & thick white syrup. Bedwin scouted ahead, &...we paused for next week. 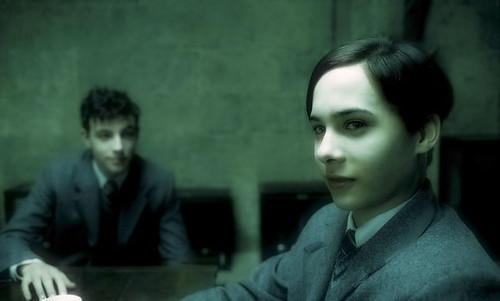 I am soaking up for a busy, non-stop week. Yesterday I went to the gym, met up with Lilly (wrote "Killy"), played some video games, went out for sake & got trapped into drinking beer at the sake house. Actually, pretty enlightening time there; first, Lilly & I played Battleship & I won only by one stroke. Seriously, every time one of us got a hit, the other got a hit on their next turn. Weird. Got some nigori recommendations from the owner of the place & then off to play practice. Pretty great; the musical acts are awesome to see. I didn't mess up; I'm getting into that spot where I unreasonably worry about messing up. So tonight is a dress rehearsal, same for tomorrow, then Wednesday Cocktails at the Centre of the Earth opens! Wednesday Jenny also comes home. I will be really glad when it is next week.
Collapse