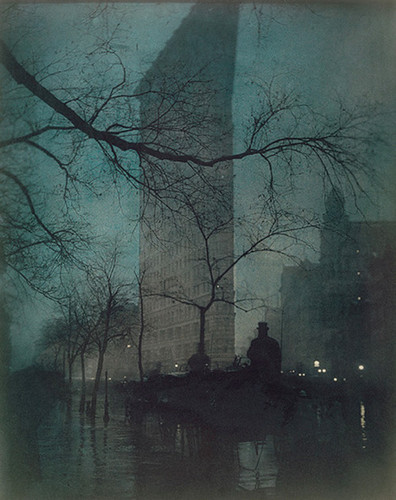 Back at work! Dear old Metropolis fetish, dear dear flat, iron icon. After Freya's Day's date the romance continued. Jenny & I went to Ghenet, the new Ethiopian place in Park Slope-- "where angels eat"-- which is I guess owned by the same people as the now defunct Mekerem, which is no longer around, or so the gossip goes? Anyhow, there is an Ethiopian restaurant in my neighborhood, which cheers me to no end; I like it. We went there & smashed a bottle of wine with dinner-- oh, & had some steak tartar appetizer that was pretty good & had green peppers. That is the closest I've come to tolerating green peppers ever. Afterward back home for some more Angel-- we're making steady progress; we've moved into Season Four I think? Then she fell asleep on my lap, then she fell asleep on top of the covers! Which JUST WON'T DO so I worked my wiles on her & woke her up. It might have something to do with the second bottle of wine we hammered out. Or the cocktails. Or the beer.

Sunday was some video games & some chilling out. I grabbed breakfast from a diner (that I used to hate but now like?) & beat Life Force, that old Konami game where you are a space ship inside like a demon-alien-planet? & you have to fight white blood cells & robots & such. I like the Wii's ability to download old console games. Plus some MarioKart, & then off to the gym. This last week has been better at getting me on track-- a reliable every-other-day. Then ran into Adam & Tania picking up lunch supplies-- salad, & then over to Royal Oak for play rehearsal. Things are coming along; I didn't choke on anything, which is fine by me. I can really only be responsible for knowing my own shit, right? Which I do, or I'm getting there. Cocktails at the Centre of the Earth is creeping up, man.

Sword of Rhiannon by Leigh Brackett.

The canals of Mars
connected the seas that were
once upon a time.

I've been meaning to pick up one of Paizo's "Planet Stories" for a while. I like Paizo-- they put out consistently good product. I like pulp, especially the "swords & science" version. Put the two together & well! Of course, with pulp it is tough to know what is wheat & what if chaff; with your Howard's & your Lovecrafts & your Burroughs, you can sort of roll the dice & hope history was right to give them props (it was). It took a little more coaxing, but Nicola Griffith wrote the introduction to this one. Oh, & I picked it up for a smile at BEA. So there is that, too. Oh, then also, "author of Empire Strikes Back," too. Stars, they are a'right. So what do I have to say? This is a book on the cusp. There is Moorcock magical swords & protagonists shouting out Demon God's names. Burroughsian man out of place-- in this case not from Earth to Mars so much as from the deserts of the dead, red planet to it's living vibrant past 1,000,000 years ago. The protagonist is of the scoundral stripe, & the girls are of the "proud hellcat" variety. I enjoyed it. I don't know that it was brilliant-- it ain't going to change your life, but then, so what? Sword fights. Slave galleys. & there was a bit where Ywain, the haughty princess of the Evil Empire (tm) is "slender as a boy in her black mail" which I thought was really nice. It worked.
Collapse