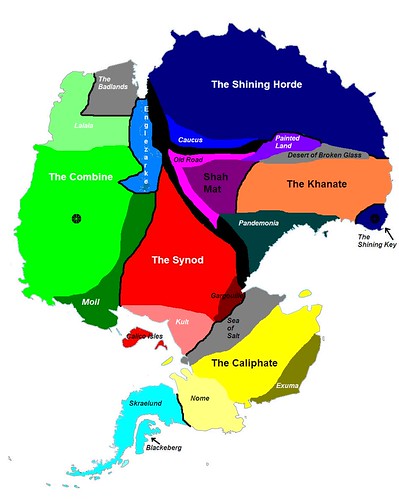 I'm a little bit bummed that my game ended up canceled at the last minute today. I'll still probably go over to Sam & Tracey's, since I haven't seen them in a coon's age, but no roleplaying. Which is a bummer-- the horse, we are falling off it! I am putting forward the notion that next time we start, we jump a few months or a year-- sort of act like a season has passed, or like we're in the sequel. I have the ultimate future of the storylines already pretty much figured out, & I'd hate to see the game lapse & be forgotten. Anyhow, I've been thinking about Oubliette 3.0 plenty, so even if this campaign does go belly up for whatever reason, I'll be all set with the next iteration...though I hope it doesn't come to that. Oh, & I think I've made my peace with making the Autodidacts (the self-teaching automata, natch) an option that isn't immediately available to PCs...putting it in the "supernatural" category with things like vampires or magic kings or living gods. Which leaves humans, karnaks, alphas, demis, cacogen, & goblins. Huh.

Last night Jenny took me out for a date. It was a half-day, so I came home, played some video games, ate some food, relaxed, went to the gym. She got home in a pretty black poofy dress & we went out to the Kappa Sake House for a date. We go on dates now! Perks of being grown up. We had a few we knew we liked, & I had a really strong one-- the sake equivilent of like, a quad or something. 25% alcohol. To eat we had their mackerel (me: "I don't like mackerel. Oh wait, that is only raw mackerel. I dunno about cooked.") which was good & very salty, as they claimed. We forgot that we'd had their "potato salad" which is basically kind of colcannon-y mashed potatoes. We also had a couple of their sushi rolls, which are no-joke fusion-- there was a shrimp & basil one that was really basil-y, & there was a salmon & siso that was reallly...siso-y. I don't know that I've ever had siso before. We chuckled our way across the block home, watched some television & some Angel & then tumbled into bed to play footsie.
Collapse