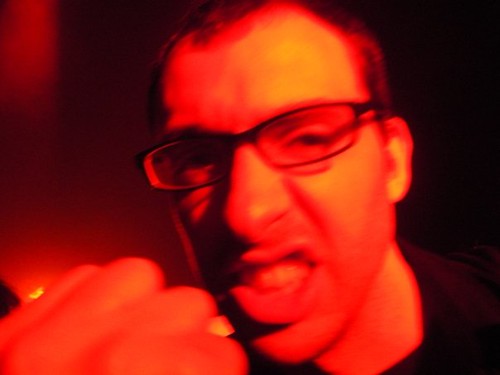 The weekend was what you might call mixed bag. On one hand, I had a lot of fun; on the other, I gave myself food poisoning. So like I said, it was a little left hand, right hand. Friday was another half-day, & I set it aside to go to the gym. I really require gym attendance; psychologically, I mean. Alienation & self loathing aren't quite in full effect, but the liminal edges of those oceans are kept at bay by being awesome, you know? The discipline, endorphins, muscles, whatever. It is a perk that helps me from feeling divorced from the vessel, not to sound too dualist (I'm a nadaist!) about it. So Friday-- the gym. I've been kept from it by a stupid cough, that sort of thing; no more. I'm back on schedule, baby. Then after the gym I came home & made a casserole, at Jenny's urging. Okay, about the casserole. I made enough for it to fit in two crockery dishes; Corningwear! & then we tested one of the dishes, & ate it. I forgot to put the other dish in the fridge before I went to my DnD game, & Jenny fell asleep. See that right there? The fucking culprit; the Other Dish.

I said "my DnD game" but I only meant I was in it; really it was

fordmadoxfraud's DnD game, & then after that

toughlad's game, since they share a stable of characters. When I say stable, I mean Trials of Hercules style stable, since we are an overflowing pot of players. I was there of course, & equally of course was

elladorian, as she does live there. Her friend Erica was there, who I've never met before but have now subsequently seen twice. Both

wolvus were there, & James. A big group, though here have been bigger. The session was fun; orcs! I killed an orc riding on a rhino! Also, I smoked a cigarette in a haunted room & got blitzed. I'm an old fuddy duddy, guys. Staying up till 1:30 screws with me; I am not hip at all, or as nocturnal as I'd like to be. I'm a nine to fiver! I get up as early as people's parents! Etc. So wine wine wine. Drunk! Then we got magic items: so this is my character OPERA's new mask: 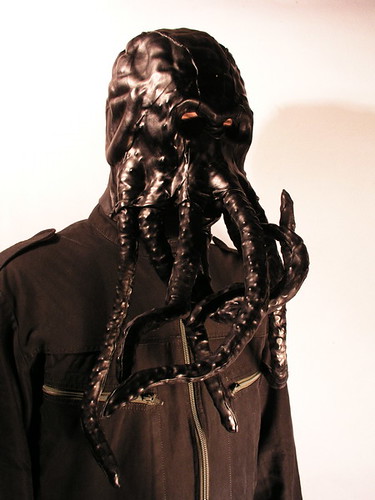 Saturday I was mighty tired from the previous night. Jenny was at work, so I had the morning to myself. I had a nice big slice of left-over casserole (! infection!) & did some of my nerdery. Sorted through pictures, watched Batman: the Brave & the Bold, maybe half an episode of Big O (I've wrapped around into reruns already, sadly) & played a fair clip of MarioKart. I unlocked the mirror levels! Then eventually Jenny came home & we decided to get lunch at Rachel's, & enjoy their backyard. Which we did, except a squirrel got stuck & was harried back & forth. Skittering across our ankles! Then I caught a slight error in our bill-- I am a numbers genius!

After that was a picnic with Kira & Nino & their folks/in-laws, Robert & Judy. My little tribe! Jenny & I picked up some supplies & met at Kira & Nino's apartment. There was some waiting, some washing of lawn chairs, some preparation, & then voom! Off to Prospect Park. We set up in our usual spot & got to grilling! When I say we, I mean not me at all; between Kira, Robert, & Judy there are enough cooks to feast for 100 years. We whetted our appetites on some snap peas & asparagus dipped in that minty green sauce stuff. The main course was "Vietnamese Sandwich Inspired"...smoked pork with what we affectionately called "garbage salad." Seriously, daikon & whatever makes the slaw that goes on bahn mi smells like garbage to the max, what is up with that? By this point the "iced tea" we were drinking in the park was kicking in; Judy in particular was quite feisty. After the sandwich was shrimp-- well, it was meant to be a shrimp sandwich, but I'd loaded up on greens first.

After the picnic (running around back & forth trying to figure out how to put out the coals) Kira & Nino & Jenny & me were walking to go get a drink when disaster struck. Poisoned disaster! In my belly. I bailed on the three of them & went home to commence with the being food poisoned. Disgusting! Jenny came home & was apparently drunk enough not to realize how miserable I was. She didn't even tuck me in! & I of course couldn't sleep; breaking out in sweats, whines & moans, & getting up every few minutes for the bathroom. Lovely! So in the end I crawled over to the living room floor & slept on the rug out there. So cool.

Sunday I was mostly recovered, but still a bit of a tired, worn out dishrag. I went & got some cereal for us to eat for breakfast, then we watched some Angel-- I didn't realize that was Summer Glau in "Waiting in the Wings!" The day proceeded to Sloppy Joe lunch, & then I had to bounce for play practice. It was a full cast, & a full production rehearsal! We hit Act V a few times then ran through the whole play from start to finish. I think this airplane might just make if off the ground, Wilbur! There were a lot of laughs, & I think I finally crossed my internal threshold to where I can start playing with the character. Came home, drank a beer & thought about my game. Now here I am at work, & Therefore A Cruel Messenger just came, & it looks good! Hooray.
Collapse