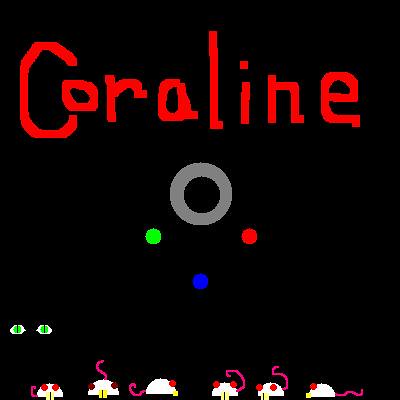 So for the final triumph of the big show-boat weekend, we went to Coraline, the musical last night. Music by Stephin Merritt, aka Yes That Stephin Merritt. Before hand we braved the sudden torrential rain to get food at the nostalgia-peddling Cow Girl Hall of Fame. Did I say sudden? Must have been, to catch Jenny! Then they wouldn't seat her while she waited for Nine & I, despite it being mostly empty. Classy. So I ate too too much (really, I've been a slob lately, ugh) from goat cheese & spinach enchiladas, & we headed over to the theater. I let them borrow my name for a minute & got my tickets. Voila. Then the show! I have to tell you, I was well pleased! The cast clamored, everyone played multiple roles, the stage sort of dissolved & post-modern tricks were full in effect. Wait, I don't mean post-modern; part of the fun of theater is that meta-text was woven in from the get go, right? So the rats sang! & the balloons were twisted, & the door slammed. The music is great; sometimes very Merritt, sometimes very stagey, sometimes haunting. The talented & attractive girl playing the toy piano has a funny job-- good job with life! I think the rat's songs & the final swan song of the Other Mother were the most memorable bits, but really, I have only good things to say. All the cast was cool as hell, & the play was tiny enough to be boutiquey & quaint, but big enough to have tricks up its sleeves. Plus, Coraline is the work of Gaiman's outside of comics I most think worthy of note.

Her pet thylacine
should be drawn yawning much more
fearsomely. I've seen.

SMASHING. G-R-A-T-E. I haven't gotten on the Westerfield bandwagon before now (a lesson by which you can learn I guess Giant Fighting Robots > Vampires) but I might have to reconsider. So this is an alternate history of World War I; only you know, muddled up with steampunk & such. Europe is divided: German & Austria-Hungary are Clankers, with kerosene powered walker-mechs on everything from two-legs to eight, zeppelins, all that; Britain & France are Darwinists, with fabricated chimera, giant elephantines & felinesques, immense airwhales that are less a living creature & more a whole ecosystem. What makes this sparkle is that Westerfield isn't kidding about imagining-- why be stingy? One character is the son of Franz Ferdinand. Why not! & the Darwinists muddle bats with moths, feed the bats flechettes, & then use spotlights to direct them as a weapon. Sure you would! The Clankers have mecha after all! Besides the big stuff though, he ain't stingy with the nooks & niches; even the curses the character's utter get a solid treatment. Oh, & the characters aren't contemptible-- a problem sometimes with YA. So yeah, I'm excited for the next one-- figure it has to be Kraken, right? Then the third I guess Behemoth, isn't it? Would make sense. Oh & the art? Spectacular.
Collapse