Strange Roads by Peter S. Beagle, inspired by the art of Lisa Snellings-Clarke.

King & the vizier,
The angel & the dybbuk
the ghost & the duel.

I got into these chapbooks through Strange Birds. That one had Gene Wolfe riffing off some pieces of work by Lisa Snellings-Clark, who is the artist who makes those poppets of which I'm so fond. This on is Peter S. Beagle, of The Last Unicorn fame, doing the same. Three stories-- one of which I really enjoyed, one of which was par for the course, & one of which was...fine. The first one in the collection is "King Pelles the Sure" which was what I expected. A bit of a moral told in the trappings of a fairy tale. I enjoyed it, but wasn't surprised by it-- I told you he was the Last Unicorn guy, right? So yeah, I was braced for it. The second tale is "Spook." "Spook" is too clever for my own taste-- a couple of well-educated fellows getting up to supernatural hijinks. A duel with a ghost conducted via bad poetry. Not having the fondness for bad poetry that some might, it didn't click with me. The final story, "Uncle Chaim & Aunt Rifke & the Angel" is really a gem, though. Apparently somewhat auto-biographical? The narrator is a young boy who's uncle is visited by an angel-- who demands said uncle paint her. There are a few moments in this story-- the bit where she's talking about being afraid of the Named angels, & the part comparing the sound of Heaven to Tennyson's horns of Elfland-- that really got me. I'm a sucker for "The Splendour Falls". There, I said it, I'm a 14 year old girl & I like Tori Amos too. So what. The twist in "Uncle Chaim & Aunt Rifke & the Angel" comes a little suddenly, but given the short format, it is easy to overlook that. 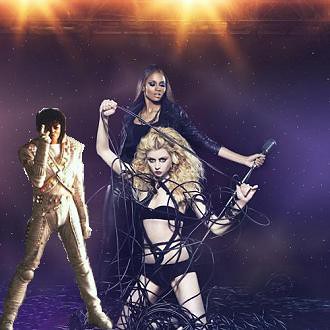 Creepy-chan was robbed. You know this to be a fact. Don't listen to bitter Danielle-- what happens on America's Next Top Model matters. It is important! The evening kicked off with me stumbling into a clutch of work people for a few tipples at a beer bar-- I had the Kelso Brett. I know I said I was done with beer-- I really thought I was! It just happened to me. Then down to Brooklyn where I met up with Danielle & bought some wine & unfiltered sake (which no one had ever had before?) & then we met up with David & bought food from Pizza Plus. At that point we were running a little late-- & somehow everyone else was early? They'd all been hours & hours late the last few weeks-- this is the time they show up punctually? I guess that is the tale. I foisted my keys on David so he could play the hero & let Lilly & Maggie in to my apartment. Jenny got home right as I was taking the recycling out, which was the Queen on the river, making the royal flush!

We started out with How I Met Your Mother. Yeah, we all knew that Elliot couldn't be the mother-- she dug her grave too deeply. Still, the episode didn't go all sappy, & hit enough humor notes to leave a nice taste in our mouth. Maybe it was the madras. Lilly was drunk. Jenny & I were bickering. It was a good time! Then there was a roach! We fought about that, too, & Lilly told her story, the punchline of which is a girl squashing a roach with her hand saying "Suicide!" Later, David smooshed the roach with his karate chop & Lilly shouted "Suicide!" which was...kind of priceless. Then, Maggie made him wash his hands seven times. ANTM was a travesty. A crime. You could have kicked Allison out earlier & I'd've been fine, but you gave her a chance & she walked (& more importantly, writhed) & then you were in a corner, weren't you? Because you had to do side-by-side comparisons with Teyona & Allison, & guess what? Creepy-chan won all but one of those. You still picked Teyona somehow. Somehow. Meaning next season's "Covergirl" ads will be forgettable & boring & we'll never see Teyona again. Maybe Allison & Heather can team-up, Awkward Voltron style? Then we tried to watch The Tyra Show, since it was the reunion special, but instead it was just gross Maury Poviching, with some stand-out sketches involving senior citizens. We fast-forwarded through most of it. Like we fast-forwarded through a lot of One Night In Paris, which Lilly insisted on putting in & Danielle insisted we watch. Lilly claimed she didn't know it was "real." Well, it is real! & yes, it is just a tape she made with her boyfriend, & people demonize her as an avatar of female sexuality. & her ex-boyfriend is a piece of crap. All true.
Collapse