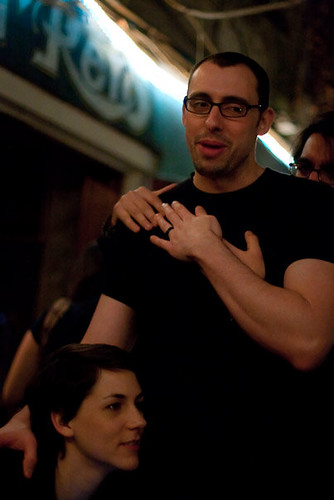 Threw a party this weekend. Correspondingly noticed that I've embraced the Metropolis definition of "party" as a gathering of people at a bar. When I first moved here, the term was anthem! Parties are at places, houses, abandoned factories, something, not a bar. Ah, well, here we are. It was an extravaganza, a feast for the senses. Maybe fifty people ended up coming out? The core clutch, a work cohort or twelve, darlings, sweetmeats, former co-workers, yarbos, jabberwocks, some babies, a real menagerie. I ducked out around midnight, my sober & nearly-recovered from sickness wife leading me by the hand. Loot: an hourglass, a book I already had, a book I really wanted, a painting in the works, a wand of excellent prismatic spray, a bottle of gin, a xenomorph, this & that. This would be an appropriate place to put in details, or memories, but here: it happened, I was there for it, maybe you were too (a lot of people where there).

Sun's day started off with me fainting! Like straight up passing out, almost. I got up in the wee hours of the morning to use the head, flushed, & then boom-- dropped my water glass, knees buckled, Jenny running in to see if I was alright. I was! What the hell was that, though? Brain tumor or dehydration are my guesses. The day was pretty lazy from there. I wracked my brain about stuff; maybe I'll talk about it some. I mean, I certainly will. After the wrackin', I met up with Maggie & we went to play rehearsal ("I didn't go to theater school to go to practice!). Oh man I need to memorize my lines, but Greg being there to tell people what to do is great. Oh man I need to memorize my lines. Daile, Maggie, & James cliqued up afterward. Hooray for us is the motto of the Lion Pinball Players! Next one Tyr's day, oh man I need to memorize my lines. 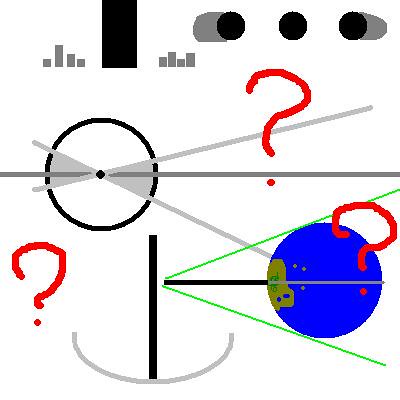 So one of the features I've been waiting, waiting, waiting on in my game is definately coming in the next iteration: the Watchtowers, aka space elevators. On account of this, I've sort of been translating the real world physics of a space elevator into the imaginary world theosophics of a Watchtower. Which, well. Contemplating celestial mechanics & astrophysics makes my head go all melty. For instance, I was (trying) to do the math on where you would be able to see the Watchtower from; the horizon formulae, yeah? Well, assuming that the Watchtower was 5000 kilometers tall, well it should be visible...from everywhere except for the places where it was occluded by the disc of the Urth? Crap, now I have to figure that out? I if I have seven of them....well, suddenly which Watchtowers you can't see becomes a more interesting factor, doesn't it? & if all of them are spaced out around the equator...okay, here is another thing I am working on. I finally wrapped my brain around how a "sundial" effect works at the equator; rather than spinning like a clock, it just starts long, gets short, at noon has no shadow, then gets longer in the opposite direction. Great-- but what happens when it is of such a riculous height? & speaking of, shouldn't the other six also cast a band of shadow; so like, the equator is shrouded in shadow? Or no; it follows the sun? I...wait, I can't...I need to start making calculations where the diameter of the Urth is the limiting factor? This is really punishing my brain, & I haven't even tried to figure out penumbra & antumbra. I need someone who is good at thinking about this stuff to help me, like the world's greatest high school science teacher, or somebody. My noodle aches. Oh, & how shadows are cast in a depression, a bowl-shaped crater. I need to work on this stuff. What do they look like at night? ribbons of light, right? Like, at what point do they begin to reflect the light of the sun themselves? Once they get out of the shadow of the Urth, right? Okay, that is awesome.

Near & dear to us
fearsome clutch of dungeon men
are all our monsters.

Peter & Alicia gave this two me for my birthday, & I gobbled it up on trains & drunk on the couch. I liked the first one & I like this one! It is difficult to really go into too much detail because, well-- it is what it is. Like, once you get the concept, you get the concept. Contemporary artists drawing monsters. I thought this one might be less "hipster art," less with the Crumb block figures & all that, but not really. Which isn't a complaint, just a recognition. In fact, I'm more than happy to have new takes on monsters; I mean, I get enough of the "canon" in various Monster Manuals, don't I? This collection has a lot more genitals in it, which the editor assures us is just the way it happened to turn out. Oh, & an introduction by Loren Coleman to lend an air of "credibility" is the right way to go.
Collapse