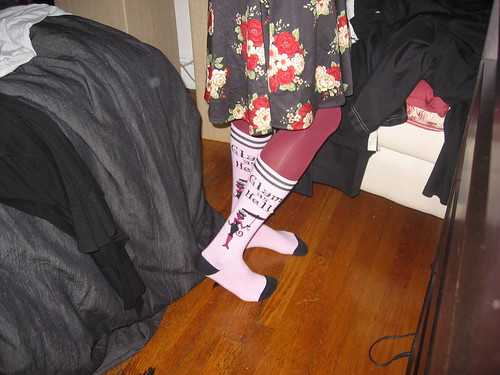 This burrito I'm eating is made out of cactus! I didn't know that was a filling you could get, but I got it! I'm pretty sure this is my first time eating it. Work has been a little hectic this week: besides all the meetings & such, everyone assumed I'd be bored all week, so I got a bunch of little projects to do, which, on top of the rest of my plate, left me feeling deep in a hole. Here is a thing I know about myself, after making a mess of collegiate life: I don't work well with procrastination. The infamous snowball-- if I let things pile up, pretty soon I feel buried & I just let go. Lucky for me, though, I'm an adult now, & I can deal with things on my own terms, more or less. Still, every so often there is a pile of wreckage to sift through. That is this week. Still, I made some good strides & I don't think I'm in any trouble. I still have some projects to do, & lots of office spring cleaning to deal with-- ugh, & mailings-- but I'm not too badly off at the moment. It has sort of been stressing me out all week though; who gets stressed about work? Leave it at the office!

In further occupational recounting, last night was a crazy office Armageddon. I stayed afterhours to help "facilitate" an editorial/sales meet & greet. After an afternoon of Keystone Cop/Benny Hill setup, they started flowing in. "Facilitate" mostly meant encourage them to drink, & oh, I should have a few glasses of vino in the mix. Great! That went well, & I somehow dazzled with a Candide joke, & before you know it, poof! Off to the races. Well, Matt & I ducked off for a shot before the races. We went to a fancy Greek restaurant & well, ended up pretty blotto. I was originally sitting next to the president! That would have kept me honest, but then they shuffled me over & I sat with some reps & people from the building I didn't know. One of the reps was the guest of honor-- his 25 year anniversary with the company. The other is the Gotham rep; he & I are pals. Pals = bring on the wine! I managed not to embarrass myself (somehow) but everything is pretty blurry after we decided our fish was too dry. One of my bosses goaded others into pounding on the door when I went to the bathroom-- pranked! Bundled home & sat on Jenny's feet.

Hidden in heaven,
where only the Bears can go
...& Rumplestiltskin.

The first bit of this book was extremely challenging. This is one of those YA books that doesn't shirk from dealing with difficult subjects; heck, everybody shies away from what Lanagan tackles immediately. Incest, forced abortions, gang rape, Tender Morsels does it & not gratuitously-- though a little relentlessly at first. Jenny read it & really loved it, called it "startling." Good gracious it is. I want to remark on what a "woman's tale" it is, but I'll have to caveat a lot to say that. First-- it really does invest in gender dichotomy whole cloth. I do want to point out that this is a good time to think about how a "man's tale" is taken as the "neutral" most of the time: like, I have to talk about the strong gender roles in this book because it is about women, whereas you might just shrug another time. Still, yeah. I'm an Essentialist to some extent-- I think "men" & "women" are real, significant clumpings at the poles of a continuum. Not to be anti-queer! Though this book doesn't mention homosexuality even a little, which I did mark as a bit odd. & this book talks about men & women in ways that sort of violently abut my ideas about feminine & masculine; I'm clearly the latter, you know? Swagger. The way the book treats the subject is, well. Initially from the point of view of the damaged (never "damaged" the word-- injured, wounded, but never damaged-- I liked that) protagonist. Men are all horrors, all potential rapes, & you can't blame her; she isn't wrong.

The flavor of this book-- this book is a faerie tale like you can't find any more. I mean, some stuff that would make the Grimms blanche. About half of the book is set in heaven (contrast to "Heaven") & the other half, well, isn't. I don't know how much talk I want to have in specifics-- there are Bears, which are a hilarious commentary on men. I felt summed up! Big & kind of useless but occasionally noble & dangerous. I know of

kingtycoon's love of the Bear & interest in gender theory, I've recommended it to him, as he gave the good word on The Ice-Shirt. There are witches! There is a bit of witch-vengeance I have some concerns about, actually; I would have gone longer on the unintended consequences of that.

I know I'm not talking about whether or not I liked the book. Well, I certainly liked it. I was definitely interested in it-- I brought it up in conversation often enough. Any deeper into my opinions is going to take a while. Needs to digest. I probably won't be able to tell you how much I like it till I get to my end of the year best of list. Will it be a contender? Maybe. It absolutely-- oh, I don't even want to say it, it sounds so gross-- challenged me. It put thoughts & notions into my head. It wasn't any single revelation, but kind of a mounting, dawning paradigm, slowly building to a gallop. Obviously Urdda is the easiest to read; Liga is the hardest, & Branza I can't even understand. Branza is an enigma to me. Or I hope an enigma, otherwise I just don't like her. Oh man the ending, ouch-- vivid.

Everyone freaking out because of the Kelly Clarkson stuff on my recent mix is out of their mind-- the intro music to Krull is on there! Man...so basically Jenny is out at dinner with Carla, & I've finished up my book & am wasting time on the internet, drinking some drinks, & debating what movie I might want to put in. I mean NeverEnding Story has some serious contenders! I'm tempted toward Krull because of these glorious horns & electronic Slayers leitmotif. Or Southland Tales or 2001: A Space Odyssey. Or episodes of Robotech! Part of the problem here is my nodding head. Maybe I should just crawl, like jelly or peanut butter, between the sheets of my bed. Who can say...oh, phone call! Jenny is coming home? Sorry internet net. BYE BYE!
Collapse