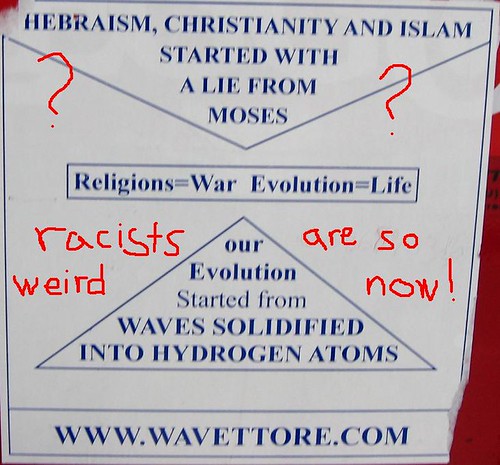 I'm all scowls now: the novelty of not having Jenny here has worn off. At least the sticker above cheered me up on the train-- psychoceramics is the term! Or possibly wizards, I hoped? It had been defaced-- someone had torn off the website & written "Jesus is Lord" all over it. If it hadn't been defaced, I'm sure I'd've ignored it entirely, but now I had a mission! Although it turns out it is mostly just people being anti-semites. Lame. Still, that is the first thing that happened to me, today, though certainly not the last!

Last night was fun. I trundled to Queens! Let the record reflect that I talk shit about Queens, but I have only fondness. The reason I give Danielle & Joe such a hard time about it is strictly because of location, & like the man says: location, location, location! I could see living in Queens, though. Walking from the train, I went down Sharkey's Row; row houses are funny, very post-war. At Danielle & Joe's apartment, with Indy the dog, at last! Only the third time I've been there, & once was moving day. We played some Guitar Hero (two days of Guitar Heroics!) Danielle & I have a new band: we are THE DOCTORS, because, see, "M" & "D", right? & then went out for sushi. Their sushi joint is just around the corner, & is pretty superlative. Then I got into a scuffle at the wine shop, over charged! & how. So I made her cancel the transaction & she tried to guilt me. Lady, your wine is labeled incorrectly? Go sit on a tack! Also, I whined about the cold-- what a baby! Then back to the apartment to watch some Spaced & I think we kept fake arguing about something? Getting home wasn't too bad; Joe walked me more or less to the train, so I didn't have to worry about negotiating directions, & then I took the E. The E train!

Scott Pilgrim Vs. The Universe by Bryan Lee O'Malley.

Quick, Scott! Your save point!
Things are going south, & how.
Gideon must die!

Everybody knows I like Scott Pilgrim, & by now everybody else is a fan, too. I borrowed this from Danielle last night & read it drunk on the train going home, & while I adore Scott Pilgrim, dang man, he can't catch a break in this book! I mean-- he deserves all the fallout. He started the series acting like a jerk! & Ramona is such a girl in crisis. Hopefully some giant catastrophe is just what they needed to grow up & have a real relationship, because man, this was a downer. Still awesome though. I just want everyone in the world to get their act together, I guess. 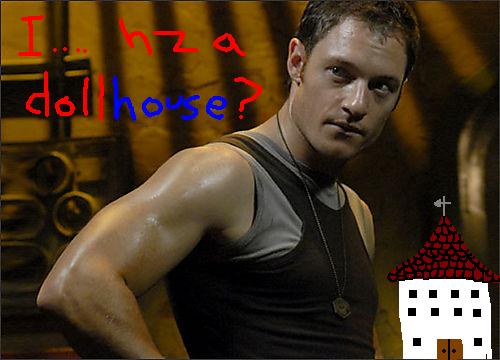 Fengi pointed me to this post about Dollhouse that talks about how there was literal women in refrigerators. I won't scoff, but I will disagree-- first, I am not the defender of Joss Whedon, & Joss Whedon is certainly not the bastion of feminist thought that some hold him up as. Remember Doctor Horrible? Still, I think a lot of people have run their opinions down on this show, & I should too, probably. Out of the gate, let me say that I liked it. Jenny & I watched it, & I think we both dug it. The "we will do a modern B-movie episode each week" trope is a strong one. Mostly my opinions on the controversy are threefold. First, hooray that we have a community of fans who think critically about their shows, especially on gender issues. Second, I don't mind objectification. Eliza Dushku has a hot butt, throw her in a super miniskirt. Tehmoh Penikett has an awesome chest, so have a shirtless boxing montage! What I hate is reductive objectification, & frankly neither Echo nor the cop are defined solely by being attractive. There is plenty of gender role stuff here to dissect-- showcasing physical beauty by dancing or by fighting, huh? I don't find it offensive though-- just interesting. Last, I don't think Dollhouse gets a pass for this, but...it is a show examining objectification & prostitution. No, that doesn't mean they have carte blanche, but it does mean they'll do things to exploit people-- I mean, the premise alone is pretty horrific, right? I am willing to allow elasticity. & I for one think the actual girls in actual refrigerators wasn't a dismissive swipe at feminist watchers, but instead a deliberate nod. I want to see if Joss Whedon can put his money where his mouth is. The "damaged bird...who is a ninja" is a trope of television & Whedon has used it before-- Dollhouse is basically "The River Tam Show" right? I want to see how it plays out. Right now though, I'm on board. As to it being boring, well, there is a school of thought that says I like boring things. 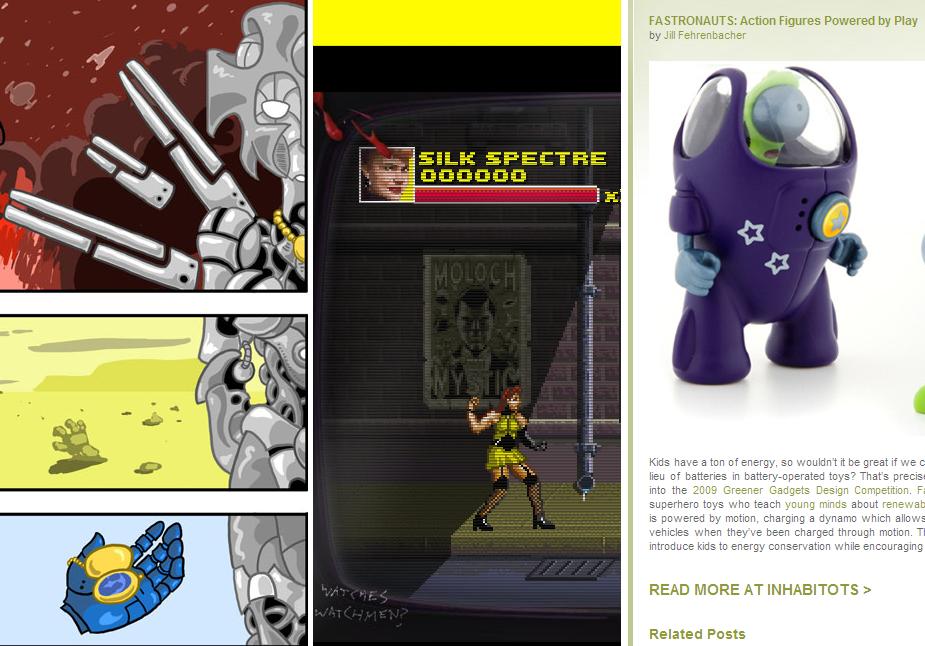 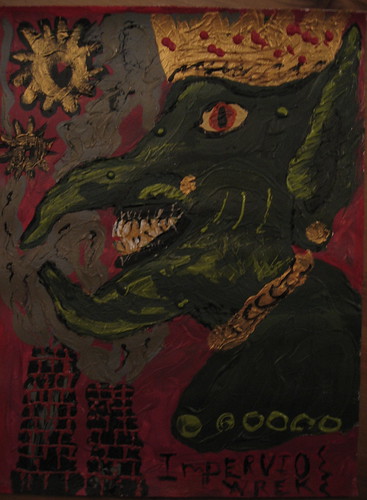 kingtycoon made this for me & now I have to step up my game. 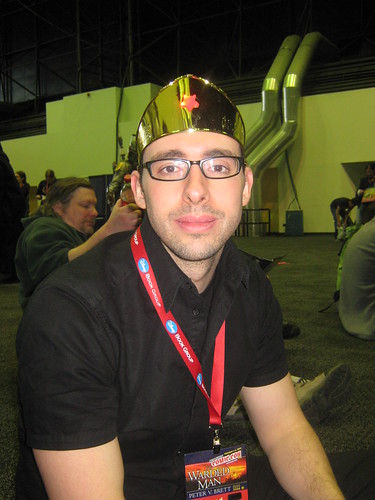 I mean, you can actually hear the spiders scratch their way around in the crevasses of the universe, right? Between the Safedark & the Domains of the Spiritual Machines. All the singing glass-on-glass. I guess it almost seems silly. Mouth angry with the taste of pennies, or something like it. I try to cling to the Alpha Doctrine, you know? Be supreme, be superior! & I don't feel so down. Don't feel so broken bird's wing. Today I invented the Perfects, the angels of the aforementioned Spiritual Machines. The safest place to do your computations is in the electron cloud, after all! I mean, lather, fall. Soap flakes are diamonds on the way down. The cracks, black, that spread out from where you land look like the shape of letters, of the first alphabet, of language as transgression. The soft face against the hymen of the world; each word is a chain. You clink it on yourself, then you rattle it on them. & when everyone is throttled under their weight you say: lets build a Tower. & you throw off the chains, & the internet sings everywhere, & everyone's thoughts start to bleed together. Such a spire, pinnacle, minaret! Up up up. & away! Everything is this kind of green, though, & there is the taste of corroding metal on my tongue. Like the plates in my skull have caught to rust & the bloody red is pouring into my mouth through my sinuses, a crack in my palate. & I look over at the bed & it is piles of thread, pincushion. & I think now about how if you look at a person's eyes, you can see that they are animal's eyes. Full of tears. This one has a pig's eyes, this one has a cow's eyes.
Collapse