At long last, Darkseid!
The Anti-Life Equation!
I wish this was good.

So this is over. & I'm sad to say that it just wasn't any good. Listen-- I am down with turning up the "gods" part of New Gods. I'm just not sure it worked. Or was any good. & it was more a sequel to Seven Soldiers (which I really liked) than a "Crisis" story. I mean-- you wrote this right after coming down from All-Star Superman which remains one of the great stories of comics, ever. & you know what? That really illustrates the difference between a good story & a bad one. In a good story, Superman "dies" racing into the heart of the sun to repair it from a grievous hurt, turning into some kind of golden god. In a bad story, Batman shoots Darkseid. What. With a kryptonite MacGuffin bullet. What. Then dies. What. No, this wasn't any good at all. Oh & slutty, punk Mary Marvel? Failure. Wonderwoman Fury? No. Why was Kalibak a furry? Though the fight with Tawny sort of made up for it. Making a weird Monitor-Forever People connection? Possibly a good idea but again, no. Mandrakk? Are you KIDDING me? To summarize; I knew this wasn't going to be good from a long way coming, but I kept the verdict out-- Grant Morrison has been pulling out the stops lately, & managed to make me rethinking Batman RIP (which in the end I think was a failure because well...Batman dying is a bad story, or at least that one was). Well, now it is over. & Sorry, but D. At best a D. edit: Oh & Batman becomes a caveman at the end of time. Wait, I read this comic already, & it was much better, & it was the opening two-minute sequence of Batman: Brave & the Bold on television.

Television night another rousing success; cannons light up the air with sound. I do feel like utter filth though; a week of all-drinking coupled with no gym attendance might have something to do with that. As in, no shit Sherlock. Tonight I mean to make it up to myself a little bit. I’ve been lazy, its been cold, I’ve felt celebratory. Just minor things. Celebratory or needin’ relaxin’. Still, I’ve burnt a lot of the bridges that have needed burning this week. Plowed through one project, mostly though another, & all caught up on my constantly required tasks. Go! Roll out!

To the topic of last night, fun! Lilly was the evening’s sport; Jenny wouldn’t stop pulling her chain, & Lilly was being extra credulous. Lilly was first & we were going to be food buddies—but she balked when I said the words “Chinese” & “buffet.” Oh when she saw the buffet she was kicking herself though. Not that tons of Chinese food make me feel better about treating my body like crap all week. Then a Maggie, who looked like an author photo all night, & drank white wine for only the second time this year. & David, tired from his lording of Castle Kit Marlowe. Never heard from Danielle—I assumed she was asleep! We’ve kind of abandoned any real television in favor of reality shows—the better to shout over them, my dear. Started off with Solitary 3.0: that freaking show is phenomenal. This one concluded the “sit on this” task, with one of those rotary garden-mole things being the last stool—they didn’t have to sit on it, it was just a great freak out. Then a logic puzzle, & oh, switching clothing! & then they had to put really nasty pinch-pins on, & our favorite gave up first. I heart a show where you can’t win, you just can only give up last. Then A Double Shot at Love, which is like the Tila Tequila show, only with two bisexual twins. It would be a better show if the contestants didn’t suck so much—there is no Danny to root for. Still, the twins are oddly compelling; you don’t feel like it is as fake as you think it would be. For the capstone, Tool Academy. It…pretty amazing, as I just said out loud. Some of the guys are probably fakers, some definitely, some maybe real? Who can say, it is full of mystery—hilarious mystery, & every week they vote off the right person?! Either the post-production editors are amazing or whoever decides who to kick off is. & there were macaroons, & shoelace candy, & cheese & fruit & vegetables, & greek yogurt & cookies, & home made pop tarts, & horrifying Slim Jim olives that Maggie tricked me into eating, & Jenny was in rare form! She was cracking herself up, & everyone else. & she really just was astonishingly mean to Lilly (in good fun). So basically in summary: I’m pretty glad Lilly is coming more & more into the fold. I really like her, & I’ve weirdly known her a long time. We saw Bubba Ho-tep together! & David & Maggie are adorable, & David was practically sleeping on the floor. & Jenny is super great & stopped being mad at me yesterday when we got lunch. Ta-da!

fordmadoxfraud: The other day I left work so late, the only people on the train with me at Flatbush Ave. were homeless people and social workers with clipboards who wanted to know if I was homeless. "Do you have a place to sleep tonight sir? Is it heated?" When I told that story to M and Jenny they asked if I had been wearing my red wool cap at the time. When I said that yes, I was, they both howled with laughter. 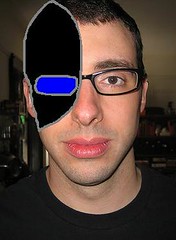 So it has been a while since my face was broken & healed. This comes up—has been on my mind—for a couple of reasons. One, when the weather changes, I can feel it. As an ache & a temperature difference. The other is much more mundane—I ran out of calcium vitamin supplements, & I’ve decided not to buy any more. Since the damage, I’ve been taking them; the titanium alloy osseointegrates with my bone; the molecules bond together & interweave. I’ve been taking calcium during the rough & smooth parts of the bone healing process, but that should all be done, by & large. I still get plenty of calcium in my diet & multivitamin. Really I am fine, but it is a choice I made, to discontinue self-medicating. I don’t think of it that much, but when I do I am charmed. I don’t know, war wounds. Battle damage. Also, here are some pictures of what a hambone I am:

This is an odd little book, & I think I really enjoyed it. To shorthand the premise on a meta-level, a mer-like "water witch"-- an elemental of godlike dimensions-- wants to wake the Leviathan at the world's core & end all life. To that end she makes a couple of blood thirsty shark children-- a pirate & a nasty socialite-- to do her bidding. Opposing her is, well-- Swamp-Thing. Or the elemental of Decay, who was once Death. He makes a statue-elemental to fight the others. With her comes an insurance adjuster. Sounds a little odd? Well, during the first half of the book, she's just a statue-- not a moving statue. A statue.

The prose is really interesting? Almost backwards. Evasive. You feel like the subject of the paragraphs are at the end instead of the begining. Elusive. Which feeds into the story-- none of the "children" know what is going on, & frankly, the more godlike elementals don't either. Elementals. Priest using a turn of phrase for them I find really evocative: they aren't made of their respective elements, but they are made from them. Cunning. There is a poison thing going on-- I don't know if it is to represent the works of man as being Othered from the natural order, or what. I half suspect that Cherie Priest was privvy to the old Immortal: The Invisible War RPG.

There are gorgeous moments, but I think the first scene with the jewelry smith will stick in my head the most. You immediately get the sense that he's more than it seems; he takes someone into his forge & just glories in the heat, in the fires & flickering light, in his club foot. He goes on & on about arsenic seeping into metalworker's flesh throughout history, turning them lame. He really comes across, in his brief cameo appearance. There are others-- the insurance agent trapped in the cult's church also springs to my thoughts.
Collapse