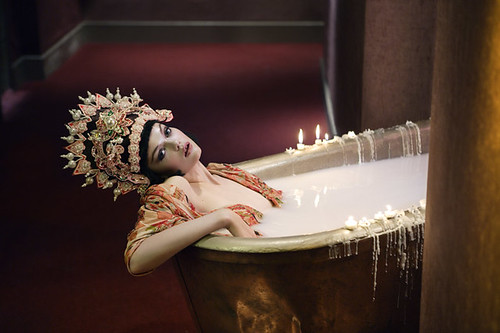 The Baronessa Octavia Malleus, patron of The Box

I think last night's session was a big success. I tried to reign in the plotting & dickering-- there was a bit where characters argued over the minutia of how deep in a river a barrel should be set, but I nipped it in the bud before it could flower into a full despondant slow patch. Lots happened, I engaged those with fighting skills (something I rarely do!), I engaged those with physical skills, mental skills, I advanced short term plots, long term narratice arcs, & even character back history. I kept my ambitions small & I think it paid off, & I underlined that there is a war on, not as a cerebral threat, but a little more viscerally. So yes, I'm pleased with myself-- I made the most of my plans; I let the PCs win (but not unconditionally), & made the most of their plans; & I seeded a degree of weirdness & horror. Thumbs inserted into suspenders. Plus I took the time out of game to explain some political concepts that were both confusing & had been spelled out over several sessions-- I like making things clear, & I know it helped some of the players connect the dots.

Things began with Bedwin receiving word that a ship of malcontents were going to smuggle their way into the city. Bedwin has his finger on the criminal pulse-- there is a certain canal that passes through a noble's fief-- said noble, the Baronessa Octavia Malleus, comes from a family where the sometimes fragile mental condition of the aristocracy has come to the fore. Her land is off-limits too all but other nobles, under penalty of death. Officially, at least-- smugglers have arrived at an argreement with her: crime doesn't come to her home with its bloody mouth of rape & rapine, & she turns a blind eye to their use of her canal. Except now Bedwin hears that war stalks it-- a full ship of the line, full to the brim with five hundred sailors & a thousand of the Unransomed, the Scars-- formenters of the recent civil war. So off Bedwin went to tell the others.

Those others, meanwhile, were playing with the insanely ancient mechanisms of the Dragonfly theme. You see, the city of Malake is the oldest continually inhabited city in the world; the foundations were layed in the crystal spires & palisades of Karn, & for thousands of years the best & brightest of two continents have layered changes & machinary into the fabric of the city, the very architecture. In the city block sized building called The Dragonfly, one of these devices is an orrey of lights & shapes. When Bedin comes in, Lorelai has begun to make some sense of the forms in the heavens, while Damocles manipulates the crystals & circuits in the wall by means of the Black Key he wears about his neck. Bedwin comes in to tell them the news but, given his bent for the occult, becomes entranced by the sky-- as does Balthazar as he comes up from the dark basements of the Dragonfly theme, where his laboratory is. Before too long, someone remembers Bedwin had something to tell them! & so tell them he does. The group runs off to inform the Doge, Young Fleance, & he grants them leave to carry out a scheme... 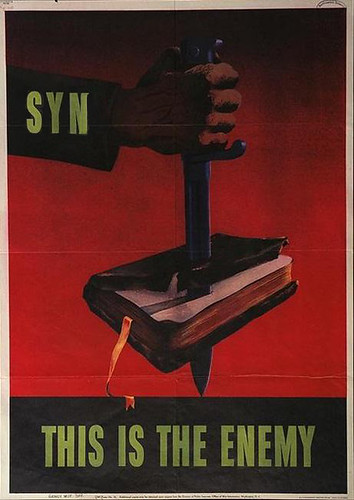 The Ornithopters of the Shining Horde drop Anti-Synod propaganda all over the city.

First, Balthazar & Bedwin descend, by means of secret ways, into the dark below the city. They take a gondola into the canals, then into the sewers, then into the abandoned sewers of bygone ages of occupation, till the gondolier will take them no further. The rest of the way they trudge, down abandoned wells & rusted rail tracks, till at last they come to a cage of chickenwire. Getting in (meanwhile in the real world, I make Tom & James get into the closet with me, & I lock the door) the cage descends, passed by hundreds of goblin hands, hand to hand. They grasp & pinch & carress Bedwin & Balthazar as they go deeper & deeper, till finally something wriggles in with them in the dark. They promise the goblins a home above ground-- the Increscent theme-- in exchange for copious amounts of the goblin's brimstone, the alchemical salt that makes things go BOOM. They return to the surface & get properly drunk, in celebration.

Meanwhile, Lorelai has taken it upon herself to visit the Baronessa Octavia Malleus (pictured above) by herself. Before she goes, one of her servant friends tries to dissuade her-- the servants at the Baronessa's are the dreaded Covenant of The Box. They are a family with a high rate of achondroplasia-- but those born without it are locked in a box till their eighteenth birthday. Still, Lorelai braves onward; she charters a boat under the official orders her Ell-wand (symbol of her status in the city) grants her, & takes it along the long trip to the Baronessa's fife. There is only a single, precarious stair leading upwards, like the Cirith Ungol. Atop, she is acosted by little people-- the Covenant of The Box-- some dwarfs, others stunted into short stature. They are half-feral, & when she claims her noble stature as a Demoselle of Lalala, they lead her to the homestead. 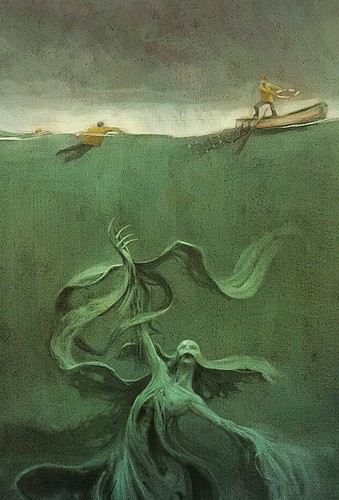 The odd painting hung in the "waiting room" at the Baronessa's home.

Like a viking longhouse it is, though with the gilt & gold long since stripped, the mighty ceder beams rotten & full of eyeless grubs & termites. In one of the few rooms that haven't collapsed, the Baronessa sits in a bath of milk, has sat in a bath of milk, & will sit in a bath of milk. The candles have guttered, but there she sits in her robe & her crown. Seeing Lorelai in her splendor, she asks her to join her in the bath: & so she does. Then she has a cordial of blood brought-- the same fateful drink from Demi-lion! It was said to be fermented shark's blood, or whale's blood, but it smells now as clean & strong as the sea in its might. Lorelai drinks, & she leaves the Baronessa smelling like milk & sex & tasting like blood.

At last our players rendezvous & the trap is set! They go to the rice paddy in the delta of the canal's outlet, & with their procured explosives, they create mines. Between Lorelai's experiance with barrels in the water, & Damocles remembering how the monks of the Sun Cutting Darkness sept would cool their beer, Bedwin & Balthazar's experience with explosives & devices, & the aid of the Lumiere Valentine, they rig them to blow, & sink them. With them come some five to seven hundred Elite-- the warrior societies of Malake. Then at last the ship comes! 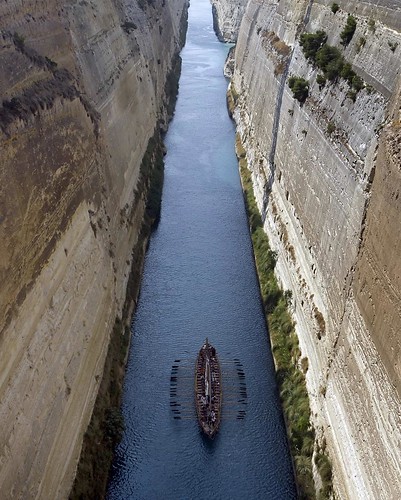 The frigate of Scars-- Unransomed & others-- who have come to sneak into Malake.

BOOM! The ship stikes a mine-- but only one of four? As the frigate begins to list & sailors & soldiers fall overboard, Balthazar & Lorelai jump into the water to see the disposition of the other barrels-- & see something remarkable, instead! Balthazar says he saw a prince, black of skin, with an Orichalk crown & a robe of golden thorns; Lorelai says she saw a horrid fishman, & they both saw this murky figure spiriting away two of the barrels! BOOM! There is no further time to think as the next mine finally triggers! Now people are falling-- or jumping-- overboard in earnest! The fray is joined; Bedwin weilds his blunderbuss, & it is like new mines exploding! A figure waits to kill Bedwin with the knife clutched in his teeth, but Lorelai spears him from behind with her trident! Damocles is cutting foes down as they try to clambor up a swampy patch of rice, & then jumps into a boat to bring the battle to his foes! Balthazar is stipped to his skivvies & covered in mud, weilding his three-barrelled pistol in one hand & a throwing axe in the other; he sneaks up on a hiding foe & puts his pistol to her temple & slays her. Amidst all this carnage, however, Balthazar's sorcerously enhanced senses detect fires in the city proper-- this was a feint, or at least a single prong of many!

There is a niggling voice in Lorelai-- "join me...come to the crowning..." She saw the thing in the water as a Fish God-- but felt to a stirring in her heart, a strange affection-- as did Balthazar! Lorelai joins her suspicions hand in hand-- & they go to Demi-lion! The theme that started it all: where the Sanguine drink was first presented, where the Scars originated, where odd pictures of fishmen where to be found...Demi-lion! & as they approach for the first time in many months, Bedwin (who had never been there with the party) recognizes it...This was the theme where he was captured! Given to the Warden's jail, & his sister taken, never to be seen again! They mount the surface of the theme-- to enter it (as they must) you must go into the Taj Mahal cupola atop it, then descend via the helix stairs. The whole theme is dark; Bedwin lights a torch. Down the go; past the room filed with candelabra-- thousands of them, so bigger than wagons, all empty of light. Past a waiting room of settes-- & then stopped. There is a floor? Or rather-- a seamless door, Balthazar says, & they know it to be true. Bedwin attacks it with his knife of death-iron, while the others play with the crystals of the building, as they have tinkered with Dragonfly's; Demi-lions seem more alive, flexible, flower-like ("Like fiberoptics!" Sam says). It opens & down they go to a dining room-- where once Damocles, Balthazar & Lorelai dined on monkey brains & live squid-- & stop! Below them they hear the purr, the snarl, the growl, of the lions that Demi-lion takes its name from. One huge, beyond measure, & others, too. Damocles has a streak of genius-- perhaps they can by-pass the floor? So they again use the living crystal of the theme, emptying & then opening a watermain that runs the building's length. They can't climb down it, even with rope-- it is too slick, too dark, too daunting.

So Bedwin insists they tie the rope around his waist & lower him.
& they do. Inch by precarious inch.

Until the rope goes slack. & they pull up the end-- snapped.
& Bedwin is gone.
Collapse