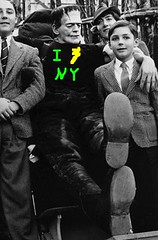 So this was a weird weekend for me. I've been acting like a baby, lately? I haven't been getting enough attention at all. So I sulk or fuss. Not to mention with the weather & everything, it has been a big of a sargasso. Still, allswell that ends well. This weekend ended with some cuddling this morning! A ridiculous ammount of visual media went down the hatch. I rewatched some Carnivale because it is awesome (or at least the first season is) & then Batman: The Mystery of the Batwoman. I like how Silver Age it was, but I couldn't stop contrasting the spare lines of the male characters to the really ornate female characters. Also-- I'm sorry, but Bullock has a different female latina partner? Confusing. Still, a good mystery. Hamlet 2 you can skip the first hour-- the show itself is kind of okay though. I watched the end of Jane Austen Book Club with Jenny-- I have never read any Austen, having avoided most of the "canon." Anyhow, it was one of those movies that make me groan & be insufferable about. Oh & we watched some more Double Shot at Love-- mess. & of course notable the new episode of Battlestar: Galactica. Even though it SEEMS to defy my theories, I'm not sure that I'm ready to give them up yet. Yeah, sorry I'm rambling-- I've been trying to keep track of my various inputs! I'm not counting Daily Shows & things like Rachael Maddow though I should be clear that I do, since those are both pretty slanted viewpoints.

How did it go? Friday Jenny was drinking all day with Carla. Saturday she went to bed early. Sunday Carla came over & then we went out. So see, I was desperate for Jennytime. Basically all I did was read & go to the gym-- I've been good about the gym on days off, but haven't gotten into a good pattern for after work, except on days when Jenny works late. Game was cancelled on Sunday, which was a bummer. Or more truthfully, there isn't a standard game on the weeks that I don't run. So there you have it. With the exception of Monday's big event: I ate too much, & my stomach hurt. A lot. I mean, I ate too much quinoa stew, & then on top of that I ate too much cereal. Then all the grains expanded & I spent a while whimpering. Jenny had to tuck me in! Though I guess on the upside I got some tender affection. Oh & I guess I started a new writing project, but mostly in the hopes that I'll slack off on it & fix up the other novel. Now today there was all that Prez jazz, & I had to stuff a bunch of envelopes.

This is a new translation? Re-imagining? The cover uses terms like "account" & "rendering"? A retelling of pieces of the Illiad. I think a fairly wide net can be cast when it comes to translating poetry & oral tradition, & Logue casts such a net. It happens to be that I'm not as well acquainted with the Illiad as some of my chums, so I'm even more welcoming & lax. Given those statements, damn. This is a hell of a book. The words are just churned up in the sand. Asleep like pistols in red velvet. Oh sure, man. Sure. The thing that really struck me is the appearance of the divine. The gods are just really incredibly vivid here, tipping arrows off the bow. They do their double duty as a metaphor & as vital deities, both. Neither diminishes the other, that the gods both stand for chance & as actors on a superior stage. I was really blown away by this.

It is funny to watch people talk so much about the Obama's dresses & how they dance at the fancy parties. No, no, they aren't treating them like famous rockstar celebrities! You are mistaken! No, politicians were the original fashion icons & gossip generators. Of course, back then the politicians were nobility, & all that. Man, it just makes me kind of sick in my bones how badly people want to be ruled by a king, any king. In my recent Oubliette campaign, I've imagined into being the notion of a kind of reverse-aristocracy, a ethical stance that inherited wealth demands responsibility. It isn't any secret that I'm not a backer of rule by the people; the republic is an all important filter-- but sometimes it is funny. I wonder how democracy could work if the first principals were adhered to, or adapted. Oh, by the way-- I'm just talking. This isn't going anywhere! Jenny is in the other room watching Rachel Maddow & I seriously just couldn't take it. Cult of personality, I get it! I wonder just how thoughtful or taken for granted the requirements for governmental participation were. I certainly don't agree with them-- race, sex, plutocracy. & I count the idea of a "meritocracy" as a pet peeve-- like, merit how! Explain that to me. How do we measure merit? Again-- Chinese bureaucracy requiring poetry; gorgeous. The neurolinguistic change necessary to parse statements out of pictographic language is the most elegant thing I've seen yet. Capitalism is worse than might makes right! Oh I don't know. Barack Obama (hey spellcheck, you might want to add that) is winning some points with at least attempting things-- he read Team of Rivals & he meant it! & having a real relationship with your wife & your homestates is charming. Just, I wish people would treat the President like the President & not the King. Though-- okay I will confess-- it worries me that Putin could beat him up. Wait, what? He speaks Indonesian? At least he's Apollonian & not Aresian (though who wouldn't prefer Athenian to either?)
Collapse