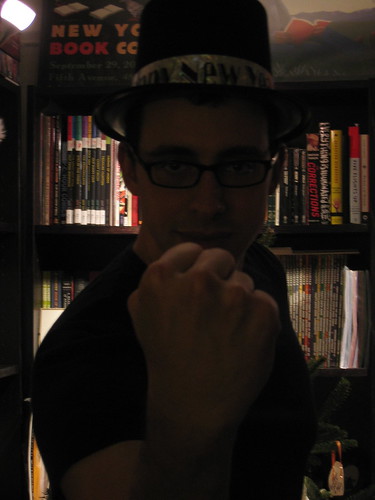 Alive somehow, despite being shattered on New Years Eve. By my own hand, my own device. We threw our little party. Folks attended; Carla came first. She had a terrible mishap in the freezing cold, dumping rumaki-makings all over her. Which sucks. Also, carrying metal trays when the outside is sub-Arctic is ruinously cold on the old digits, let me tell you. Peter & Alicia tumbled in next, all kinds of bundled up, & then James & Emily & then Pamela & Brando & then David & Maggie. & Eventually at the end there were Kira & Nino, too. I think I’m catching everybody; I was pretty dead on my feet at the end there. Be it ever so humble, our home was pretty nice, all decked in the leavings from X & shirt tails tucked in. The champagne (er, Prosecco) was flowing freely, & so was the vino & the biru. Gosh, I’d like to narrate what happened but I am terrible at remembering things, you know me. At one point I even joked about how I wouldn’t remember saying I wouldn’t remember—but I did end up remembering that! I tried to have Truth or Dare but it didn’t really get off the ground—yet somehow later in the night David’s beard was shaven into a pornstache? Alicia sewed buttons onto her face? I don’t know about any of this, my eyes were lidded. Maggie threw up everywhere again. Beats me! The first of the new year (2009—the year of the cape—I saw two women wearing capes on the train today already!) was spent curled up with Jenny & doing laundry. We watched Tropic Thunder, which was funny, & then some of Angel season one. Oh, & I read most of the comics David lent me-- Iron Fist is still good! 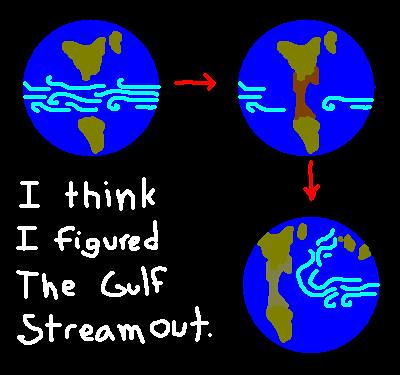 So I think I figured The Gulf Stream out. I haven't read the Wikipedia article about it because I don't want to ruin it if I'm wrong, but I think it clicked-- see, the warmest water, the heated, agitated water, is at the equator. For a while it could just go willy-nilly, right? Until North America & South America started dating, hooked up with an isthmus & all that. Then that current was wobbled & redirected. That is my theory. I'll check it out by reading about it at some point. Edit: It seems I have figured out thermohaline circulation which is only part of the Gulf Stream-- the North Atlantic current. Still, I'm pretty smart.