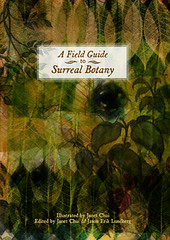 I'm of mixed thoughts regarding this, which is wholly a result of the multiple authors. What this book does is compile, by continent, a Borgesian taxonomy of imaginary plants. In some of the best entries, heavy shadowed trees, digital ascii flowers & their ilk present believable (if fanciful) ecologies. These have some oomph, as do some of the sillier ones, like the Explanatum obviosis, or The Big Yellow Flower of Unnecessary Obvious Information, whose article is written chock-full of unnecessary information, as well as asides on the subspecies Explanatum densis & Explanatum absurdus. Other entries are duds—every time an entry says something like “it is the only plants that _____,” it is inevitably within a few pages of someone else’s plant that does exactly the same thing. A singing tree or walking flower is not something you & you alone have thought of! Other entries somehow manage to be…preachy? Like the cabbage variant that grows from tears & semen & is a screed against abstinence education, or the fungus responsible for the election of Bush Jr. Yawn. The solid, redeeming aspect of these, & the whole book, is the art. The sepia tones with water damage give a nice design ambiance, & the drawings of the plants are thankfully restrained; they present the ludicrous in an understated way that really helps sell them. 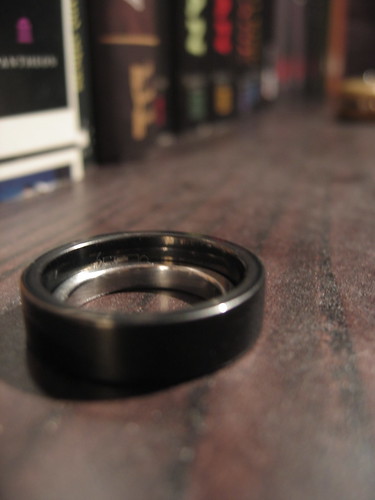 So the black on the tungsten of my ring is starting to fail. There were rumors it might be so. I’ve heard too that there is a difference between the types of carbide finish—on ones with cobalt, the colour leeches out, but if the cobalt is replaced with nickel, things are fine. I thought mine might fall into the latter category, since I wasn’t seeing any discolouration on my finger, which is supposed to accompany the leeching. Well, long story short, it seems like there is a “band” of decolouration, along with a few flecks. I’m not freaking out about it—well, maybe a little, but I was reconciled to the possibility. As long as it “weathers” in an organic, not stupid-looking way, I’ll be fine. Something that I realized today that has been on my mind. On my mind. Dwelling, you could say. I guess my daily life is just as tough as Mount Doom. Suck on that, Frodo & Sauron. & come to think of it, my shoes are falling apart too. Entroy rains, all hail Discordia.

Well it certainly was a bundle of sticks for a weekend. Bend but don’t break, don’t stop! Friday was the work party, full of punishment to poor meat mecha Mordicai. Then from there extended work friends, & more hurt, & then home to a pizza party. Saturday was lazy—I ran errands but not the ones I necessarily wanted to—& then next thing you know, Aaron was in town. I met up with him & his buddy Nick in SoHo—the pretty lights of Manhattan having sparkled & seduced them—& we shopped a bit in the Evolution store, grabbed some lunch at Dojo’s, & then zoom! Off to the Metropolitan Museum of Art. Tracey was having a birthday party there—a scavenger hunt, to be precise. There was some sleight of hand with the doors & the coat check, but we all met up & split into teams just like that. & we were off! The clues were very good—there were hard ones & easy ones, & the answers were mostly unambiguous. At the end, we were screwed out of half a point, but it wouldn’t have mattered—Tracey’s team for the win! & they all got free passes & went off to Jekyll & Hyde. Meanwhile we split off!

The split was for Danielle’s party. In Queens! The boys with me came to Queens but never came to Brooklyn. Bizarre. Danielle’s place with Joe moved in; the very first public showing. Point of fact, I only saw Danielle’s apartment when I helped her move in. The whole place kitted out was very nice; very Art People, too. I met up with Jenny & Carla, Ovieh, David & Maggie & we rocked the joint. We ended up in the bedroom for a while? You know me, I am not a rememberer. Coming home was dismal, but not the end of the world. Zoom along on the R train, or the E train, or whatever path of the river took everyone away.

& then Moon’s day was Simon & Meg’s Trivariety show, complete with riddles & songsmiths & hated celebragrams. The attendance was a bit sparse-- & no Lauren, & I’d even brought her a present! First though I met Jenny in Chinatown & we grabbed some dinner—too much dinner on my part. I was so hungry! Our goal was two beers only, & we reached it, too! Teamed up with Mike again, & he’s good for it. A winner. Of course, we didn’t win. Two celebragrams! Not fair. We weren’t hitting the high notes; we just were not. Still, we won the door prize of spidered beer, & gave it to the girl on our team, who had just moved here. The music was a apple-juice drunk, Sissy Wishbone, who Simon says is like Foster Brooks, & I don’t know who that is—is it like Dean Martin? & also bobbyblue, who had a soulful voice but some did not like. The other entertainment was brought to us by the Bridge & Tunnel Players—& I’m not talking about the Brooklyn bridges. You knameen?
Collapse