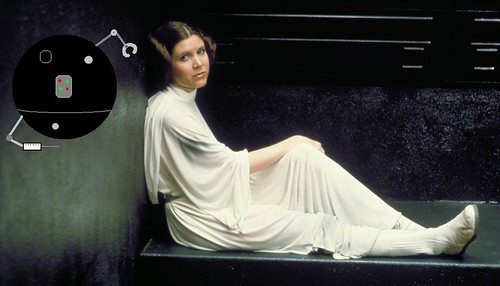 lovely moment of misunderstanding last night. jenny's on the upswing but still under the weather. i've been using the chance that i might be fighting something off to excuse my lethargy. so after some lego star wars, we flip on a colbert report that we have saved & lay on the couch vegetable like even. the guest is paul simon & jenny tells me-- "you know, it turns out a lot of his songs are about princess leia." so there we sit in silence, & internally i'm thinking-- maybe i need to re-evalute this pop musician? until jenny, after a few more moments, said "because her new biography just came out." oh, oh. carrie fisher. she's fine, but why! princess leia is infintely more deserving of songs than carrie fisher. everyone's priorities are so messed up. they'll write a song about some actress they are sleeping with but-- did they know princess leia is one of the leaders of the galactic rebellion? she is. & that her dad is darth vader? or that she's a hella good shot? & that she is totally in a couple with notable correllian ne'erdowell han solo? she is really pretty great, you should write a song about her.
Collapse