I think T. Boone Pickens should be Obama's Secretary of Energy.

I want to go see this Cthulhu art exhibit. 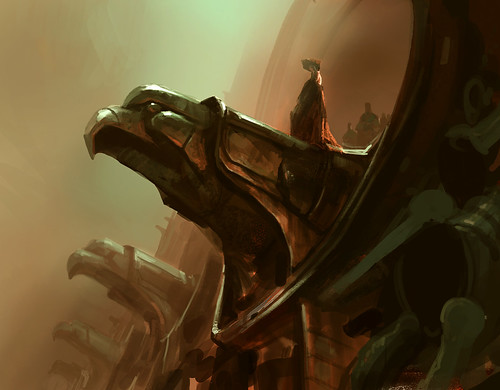 i can't stop my game from having a whore house in it. there is some archetype beyond my ability to forsee or control. but i am getting ahead of myself. i used a teaser to ease them from one story to the next, & the started off back in the undersides of malake. their home turf! they climbed a little & lorelai & balthazar echoes each other's suspicions that the black rock of malake was remarkably similar to the crystal of the karnak city-ship they found in lalala. up among a place where the light was grotesquely seeping, they heard sounds of violence, & following, they saw their friend, caveleri cosimo crucious, a noble of rose cross, locked in combat with unknown assailants!

here is where things went differently than i expected. they joined the fray on cosimo's side, but before anything could happen, lorelai yelled for the fighting to stop. damocles had been trying to disarm a gentleman in rhino-hide, balthazar had slipped through space almost ghostlike, bedwin was hiding in the shadows taking aim, & cosimo was urging them to flee with him. instead, they stopped the fighting. & let the sides retreat. & when one side recognized them & called for their arrest they...gave themselves up & went with them to speak to the doge. or three of them (& damocles' sidekick, mathio), with bedwin climbing after them like a spider.

the doge laid it out for them. starting with the unrest in the goblin warrens, trouble had been brewing. see, malake has slavery, & it works like this: the economy is lassez faire capitalist, which means lots of booms & lots of busts. when it busts, rather than have a debtors prison, they just put you into indentured servitude for your debt. war-wise, the military-- well, the military is more warrior societies, & police wardens. & they care more about coup & ransom. if no one ransoms you, well-- you are again, indentured. well, one fellow, jan demilion, had slowly, secretly, been buying up lots of unransomed soldiers, & he declared slavery abolished, & a policy of debt forgiveness. well! chaos! the warrior societies repulsed him from the city, but it was civil war.

suddenly, foreign powers were real eager to help stabilize the situation. "just let us in, we'll occupy your city & take care of everything." see, malake is like hong kong. a free city. below it sits the theocracy of the Synod; to the east is the exotic land of Alade. well, it turns out recent upheaval has led to a revolution in Alade-- & the formation of the Shining Horde. they'd sure like a toe-hold in the part of the world! more to the point, lorelai's owner has apparently liquidated his vast resources to raise a mini-horde for them. the Synod won't stand for that-- mind you, the Synod that Damocles is from, the theocracy of the church he belongs to. to mix things up, the nobles of malake, long exiled to the suburbs, have decided they want to "help," & maybe that is code for "reassert control?"

again with the players surprising me. they all agree to work for the doge. he officially frees lorelai, he free's damocles' church superior, he writes balthazar a writ of marque. he hands out their ell wands of office & they decide to go to lorelai's owners old home-- the dragonfly theme. when they get there, lorelai asks who is living in the bulb, the sort of "penthouse where her former owner the noble airavanthe of the golden nirvana lived. "nobody, no one wants to be associated with the foreigner who fomented insurgency. plus, we're all fleeing the city." well, she tells them she lives there now, & anyone who has trouble in her building can find her there. !?! yeah, she lays claim to the whole mega-structure. & then puts her xp where her mouth is & buys two dots of haven. & then balthazar buys one after his pigeon slaughtering bugs her. then bedwin buys one, & buys a dot of library. & damocles buys a dot of security. they speculated on real estate & now they have a base of operations, no kidding around.
Collapse