since my game was canceled on sun's day, i was left afloat! my usual morning is a scramble to get frosting for my cake-- images, sounds, just the right miniature, that kind of thing. instead i was untethed, & on top of that woke up early on account of being plugged full of wires. so i got up & at 'em & tried to entertain myself. went to the gym, ran a few errands, did a few chores, stayed out of jenny's way when she got up. she baked some granola bars & an apple cake. i was a little stir crazy? i didn't feel like putting my nose in a book, & there wasn't any television or video games. sulk! sun's days are usually reserved for us to not be disgustingly umbilical; i do my thing with my folks, & she does her things with her friends. so away she went & then the ghost of boredom, & the zombie of boredom & the lich of boredom too came upon me. to dispel it, i called up victoria, she brought over her dog & guitar hero, & we had indian food. suck on those apple cores, undead! & now i can't even return the sleep machine to the doctor's? they are supposed to call me back so we can schedule it, but i haven't heard back from them. did i mention that the computers were down at work for about an hour & now our phone service has been suspended? awesome. 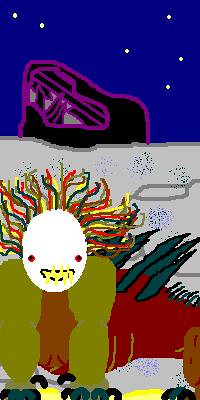 so in-between the walk to work today & all of kit marlowe & co.'s links to the outside world being cut, i've had plenty of opportunity to kick over some imaginary rocks & see the bugs & grubs underneath. i've gotten some good ideas, like-- the secular pilgrimage! in the Unity, the way you move from "journeyman" to "master" (whatever they might actually be called) is by having a masterwork. whether that is the biggest pumpkin you ever grew, or the cleft helm of an enemy hussar, or a thesis on astrology. then you take that to The City on your sacred, secular pilgrimage. making The City the center of your quest means that in the city there are always the biggest, greatest, most amazing things for sale. there, in the heart of the ideology, the best is taken for granted. i also worked on The Box, which is the code of behaviour that guards your reputation, your heart. never be outdone! be of good use! be loyal! act with compassion!

i've also been thinking a lot about the Synod, or the Church of Lux in particular. i knew i wanted the Pontifex to be the sole custodian of human sacrifice, but i hadn't decided on whether i wanted the sacrificial person to be a convict or prisoner (& thus a victim) or a voluntary honor. i've decided on the latter, since that makes for a lot more potential drama. i might have there have been historical periods where a sacred convict was used though. maybe they'll be branded with a crown first? i've also been trying to wedge in this idea of the virgin/madonna/crone as counterpoint to the real-world maiden/mother/crone. i think i've decided on separating the hierodules from the hierophants by celibacy. a hierophant can appoint church officials, & thus his generative office precludes the actual generative act! or hers. or well, maybe i want the office of virgins, madonnas, & crones to be unique? i don't know. i also have to assort out burnt offerings (to the genii, i think, since they are made of smoke), blood offerings (clearly the most important), & meat offerings (which are the most communal). oh, hey, ha, i've also been talking about burning babies as an alternative to abortion! hey, it kept the romans out of carthage for a while! & finally, i think i've decided that the "gospels" of the church will be the ex cathedra statements that made various heresies part of the faith & tradition. so like, you are polytheists? that is fine, suddenly we have these saints that line right up with that! you guys are into mummification as part of your voyage to the afterlife? well those are our official funeral practices now. so on & so forth.
Collapse