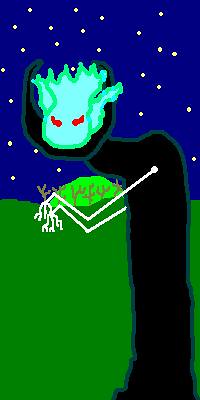 i've been a busy little devil, i have indeed. thursday night the doctor fumbled; i went to go pick up the machine that measures my sleep, but he didn't have any at that office. or she-- the nurse is taking care of all this rot. so i had to make an appointment for the next day, which i promptly did. you guys didn't have my machine? oh, don't sweat it, guys, i totally don't mind taking the evening off work & going on a wild goose chase. thanks. then i swung over to the banana republic in the world financial center. tiny little shop! anyhow, i like their shirts, though they only carry my size on the internet; still, the one i got fit me well enough, & was on sale.

i was buying a shirt for part two of my macmillions interview. new shirt for luck, blue shirt for luck. something new, something blue. marry me, mister macmillions! i saw the gentleman who had interviewed me after i passed the human resources gauntlet, & then i spoke with his boss. who can say how i did? i didn't fumble or gaffe but did they realize that i would kick-ass at the job? & be pleasant to work with? i am, ask anyone. & i would, let me tell you. here is hoping they figured that out. afterward, i would have gotten google-lunch with pamela, but she is in atlanta, so i came back to work.

after a little bit of office, i went back out to the doctor's again; a different location this time. they are migratory. nomadic ents! oh man, nomadic ents. got there & let the nurse explain how the machine works, how to hook it up to myself. it isn't that tricky, or hard. i'm sure people screw it up all the time, though. i let her go through the whole spiel; it is only polite. that finished, it was finally time to head home.

weird how going home at an atypical time can really mess up your clock. i bought some groceries, cleaned some dishes, & poured some wine, while jenny started to cook. somehow i got drunk pretty fast? well, tipsy. i think i was just ready to be done with the day. we watched some grey's anatomy which is still not a very good show, but had a good moment this episode. then some veronica mars, & oh man, that show is really all about logan, you know? that guy is great, though jenny thinks i only think that because he's me. not true; i'm better than him! then some comedy-- best week ever & such. fun times with my lady jenny. & then here i am now at work, making up for all the time i've lost this week, between the doctors & the interviews & the dentist & all those million swarming locusts.

We remember the Hammer-maker. His mother was the City, his father was the Work. He grew large on the milk of the city; he was the last of the giants. The Hammer-maker was born for war, but he loved only the anvil & the Riddle. He loved the anvil & the Riddle but alas for him, Swords & secrets loved him. His hammer did not ring at the forge, but instead drank deep of blood. Because of his size, there were those who thought him slow; & slow he was: slow to speak. Maker of terrible oaths, Basilisk-friend, the Hammer-maker knew that he must turn his hammer against himself, for he was The Monster of the City too. The first thing his hammer ate was its name; but in time, it drank deep of many names & many secrets. The White Witch of the Green stood with the Hammer-maker, but he died Nameless, breaking the mirror & skull of the Red Witch of the Silver thrice over, on the Blasted Heath.

We remember the Red Witch of the Silver. She was the mother of a thousand demons, hatched forth from her womb. When she was young she was promised to a woodcutter, but she fled her family & her duty. When she was young she watched the Mirror yawn & swallow her brother, & when she looked in after him she found a Horrible King. The King took her as his bride, & gave her back her brother The Twister covered in scabs. & gave her more besides, for she was full of belly & of wickedness. Her restless evil scoured clean all the other evils of the City & so we thank her. Her Alchemy seeped into the hills, into the air, & her diabolical children lurked in every reflection, in those days. In time, the Red Witch of the Silver was slain by the lawful treason of the Hammer-maker, though her children scattered wide from the Blasted Heath where she fell, & carried her Wooden Heart, the colour of pitch, with them.

We remember the Cheshire Courtesan. His father was the faceless City & his mother was the Madam. His sister became the Lawmaker & upon his shoulder sat a smiling Devil Monkey, ink-drinker. The Cheshire Courtesan lay with generals & faerie princes, shared smoke with goblins & gods, & his palanquin stalked in the Twilight of Urth. Alone among all living things did he snatch a tainted heart back from the scales of justice, washing it in blood. Where the Cheshire Courtesan walked, blue flowers grew, & he stayed the hand of righteous killing, for better or worse. He wore on his brow the crown of all his yesterdays, & he was the Jewel of the lower wards. The Thin World was his domain, & he extracted many pledges from those that lay within the scars of the world. The Cheshire Courtesan said he would be born again, & so we watch for him, & his sign is the Monkey's Paw.

We cannot see the Faceless One. It has sang to all the ghosts & now they are silent. The poliwogs croak shapeless, mindless memories. Those who seek The Faceless One out in thought are confronted by a Door of Jewels & Fire, & can go no further. The Faceless One sat on a throne of bones & bore a bone in its lap as a sceptre. Its body lies beneath no tombstone, the house made for it in the Necropolis is empty. Empty of poems, empty of tales, the Faceless One is forever with its Wife. The Secret City Within The City has given the Faceless One a name, & that name is the Heat Miser, & it has an evil Hand. The Faceless One will not be known till the titans wake & quake & break the world open once more. Until then the Faceless one is terror, thrice greater than you can imagine, forever burning, master of lies, a Prince of the Great World.

They went into the Great World. They killed the Dragon. We remember those we can, here in the Iron City. 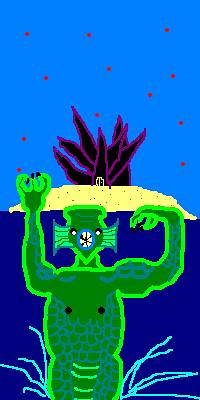 Here is the tale as it is told. Mortimer Cainia struck Gemma Auctoritas with the dolorous blow & she was slain. Long before that, when the world was young & humankind had only just risen up from the half-apes, the world was over-run with devils who looked as men. It was Gemma who spoke with the Grey Lady Adorned in Jewels; it was Gemma who signed with sacred blood the Covenant & was not as man or woman but like unto a God. It was Gemma who burnt offerings to the Genii, & who in Lux's name kept them beneath her heel, & their teeth shattered against it & she knew no pain from their heat. She raised the people into arms, gave them long knives & heavy capes, & told them to go forth & free humankind, & they did.

Gemma's right hand was Archibald Salubritas, & her left hand was Mortimer Cainia, who was called Mortimer Metis. They were her swift & strong myrmidons, dexter & sinister. They were alike as brothers, but not in form; Archibald was bright like the flame, all of copper & gold, while Mortimer was a dark river with deep currents, cobalt & iron. Like a coin, they were, front & back. Theirs was the power & the vengence. Their swords were brighter than all the stars or else darker than all the blackest goats. Towers crumbled at their coming, chasms yawned forth their treasures, & they made rich the tabernacles of Lux.

The Apocalypse Beast came forth, clothed like a boar, bristling with the bronze spears of Eld, scars shaped like the faces of the worlds it has slain. It had no fur, but rather bolts of lightning, & amidst its four tusks dangled a black tongue & a firey crown. In its hand it held a terrible axe, the rumor of whose coming was enough the slaughter all. Split hooves in the earth left bile filled pits & upon it rode Mortimer Metis & Archibald Salubritas. They smote it mightily & choked at the Beast's ichor which flowed forth. Mortimer made as if to swoon & Archibald bore him up. A cloven, steel shod foot set upon Archibald's heart, but Mortimer beat it back. Again & again; thrice times thrice it came at them but at last they were the victor, though none would say by what stroke it was slain.

At times they were apart. Mortimer set upon a sea of black wine, his only company his sword, & was gone for many years. Or Archibald, by gentle speech, was taken & grown within a tree trunk, only to spring forth when a woodcutter freed him. Or Mortimer, grim, went into the Coven of the Heartless & dwelt there for many years until he drew back his knife with a flash & cut a hangman's noose. Or Archibald, full of meriment, drank deep of the beer of a sleeping monster & made it his friend, but slept one hundred years beside. There was a book, & Mortimer Metis plumbed its ciphers. There was a crown of thorns & Archibald mastered it.

When once Mortimer was alone, he fell in love with a girl named Daphne who wore blue, & she him. She was sad at times, but then, at times so was he, & so they were together. She knew him not. He was Mortimer only, Metis no more, for a time. When she dissapeared, he was filled with cold malice, but he poured it out. Mortimer Metis was filled with a pit, & he filled that pit with blood & holy violence. For a time then he stuggled with Lazlo Blackheart, all the world's enemy, & under the tutalage of the warlock Woland, he brought him low. & Woland spoke to him.

Archibald Salubritas returned then, too, when the need was dire. Dark had come & evil stars hung in the sky. With him came his betrothed, their engagement annointed by Gemma, & her name was Daphne. Mortimer Cainia was wroth. Archibald & Mortimer met, & they clasped arms as brothers, & Mortimer Cainia looked on Daphne & he seemed to see her not. His cup was empty when she came to him that night, & he sent her away. Again she came, leaving Archibald's house, & again Mortimer sent her away, though his heart now was filled with something else besides blackness. When she came again he could bear no more & he took her away. Down a path of bones he led her & she clung close to him. & when he reached the end of the Road, he saw a Dark Prince, & they spoke.

Archibald came for them & Mortimer slew him with a spear of ash, for he had learned a secret technique. He slew him & though he strove to do it out of sight of the walls of the cave where he had hidden Daphne, she saw. He covered his face then, for he had killed his friend, & though she called for him to stop, Mortimer did not heed Daphne but he rode his mount, hard. Unto the gates of the cathedral where Gemma waited, & he struck them with the end of his spear & they broke. Up the stairs he hulked, & with the spear of ash he dealt a mortal blow to Gemma Auctoritas, the dolorous blow, & she was ended. & Mortimer Cainia was done & said he was pleased.
Collapse