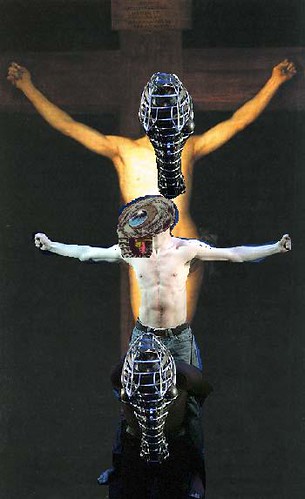 onatopofthings & i went to go see peter shaffer's play equus, also known in some parts as "looking at harry potter's penis," which is absolutely unfair, because the play is actually pretty grand. i thought it was a play more about a boy who raped horses, that was the baggage i brought with me. it turned out to be a nice little yarn about a personal deity, the eponymous (epona-mous?) "equus." yes, there is some psychosexual stuff mixed up pretty deeply in there with the horses, but rightly also mixed up with the jesus side of affairs. i won't go too deeply into it, but the invented mythology for the boy's personal god is pretty believable; i was impressed by how it was all put together. some parts of it are a bit much-- there is a preachy "what right do i have to candle heads! i am a destroyer of minds!" element to it, but then, the author had a little disclaimer in the playbill to that effect, more or less.

the cast was adequete, which with a big of imaginary psychdrama like this is actually nice. kate mulgrew over acts, but the character she is playing is pretty blustery. daniel radcliffe's "intensity" is kind of the same as his harry potter petulance, but it works much better given the setting here, & his "worshipfulness" comes across quite well. richard griffiths seemed to stumble over a few lines, but i thought his portrayal of the disappointed classicist connecting with the idol put forward by the boy was believable. & somehow, every time ryan & i see a play, we end up thinking the supporting characters are the real gems. it was true of the soldiers & girls in iphagenia 2.0, & in the weird sisters in macbeth & it is true of equus: we really liked the horses. to portray the horses (there are six) they put dancers in wire masks (which looked almost like dream of the endless' mask) & short stilts with horse shoes at the bottom. the lead "horse" also had an appearance as a horseman, by which i mean a rider. not to be confused by the holy union of man & horse into god, chinkle-chankle. there was lots of danielle radcliffe hugging on these dancers & cumming on their back; that was pretty great. i like a ballsy production.

i liked it a lot. before hand we had a couple of drinks & some beef sate at one of those weird bars that lurk on the fringes of time square, & afterward we just headed home-- i rode on occasional superheroine's "sex train". & that wasn't the only thing sexy; my pheromones were in full effect. ryan said he'd never seen anyone so blatantly "check someone out" as our waitress did, & then on the train this girl katie flirted with me about hawaiian sacrificial traditions & her japanese homework. it was a pretty nice evening over all. you know, shaffer says he wrote the play to account for a story in which the initial crime was mentioned to him. he wanted to make the act have some sense. i think he absolutely failed, but for the betterment of the play. the story of the play makes sense & actually evokes equus the godslave, when in reality the act was almost certainly brutish & simple. so there is your dionysian versus apollonian right there.
Collapse