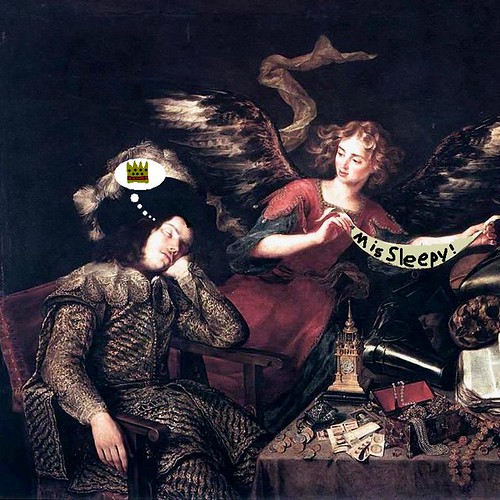 some sandman spirit came over me fierce last night! i was planning on going to the gym, but no-thing do-ing man. first off, i stopped by the grocery store at carrol street (st) & seventh avenue (7th ave). man, i am getting sick of that dump. compared to the grocery store on ninth street (9th st) between fifth & sixth (5th and 6th) it just is so so terrible. going to the nicer one is easy from home, but the other one is on my walk from the train back home, & that walk puts the better one out of my way. i have to double back! but, & i'm just talking about this to drive the point home to myself: i really, really should. the produce & meat are a gulf apart. i mean, woah crazy how rubbish the one on seventh ave (a key foods?) is compared to the one on ninth st (steve's c town?). anyhow, jenny made caesar raps, & it was all i could do to stay awake to eat them!

seriously, i was just a mess, & i don't know what. i had a weird bit of befuddlement the night before; i had fallen asleep & jenny had friskily woken me up...afterwards, i didn't sleep for a while, since my mordicai-machine had been tricked into thinking that i had a nap & that it was time for activities. maybe i was up longer than i thought? but i sort of staggered around in a daze, grinning stupidly at jenny & writing emails, drinking a couple of thimblefuls of wine, before finally letting myself get into the bed. & now here i am at work the next day. doctor's visits make me come in on my day off! but i have books to put into the system, so i will make myself useful. 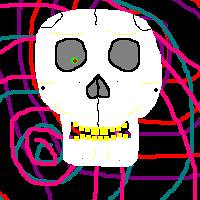 so the new wizards of the coast catalogue arrived today, giving a sneak peek at what to expect in two thousand & nine (2009). it is a weird list of books, & pretty sparsely populated, too-- maybe more will be added as sliding deadlines are met or whatever? anyhow, here is what they've got announced so far.

open grave: secrets of the undead. a bruce cordell joint (with eytan bernstein & brian james). bruce did libris mortis, which is a pretty respectable pedigree for this book. still, i've got no idea what to expect-- monsters? feats? sample lairs? that is what the blurb tells me i'll get. "ready to play material." okay? i think this is pretty much going to be a fourth edition libris mortis, but i'm okay with that; as a player, i got plenty of use out of libris mortis! my undead cohort in one case, feats in a couple of others. that comes out in january.

oh! something i really wish they would have done in third edition (3e) is being brought back for the fourth edition-- power cards! remember the "priest's deck" & such from earlier editions? yeah. there will be decks of powers for the various classes & power sources. this is interesting news; it might be an awesome tool for game play, you know? they seem a little pricey though...

skip a few adventures-- i don't care about adventures...

oh, in march they are going to put out the player's handbook two (2). "arcane, divine, & primal heroes." which will include (pay attention, nerds!) the barbarian, druid, & sorcerer, as well as the gnome, half-orc, & goliath. & you know, other things-- i'm guessing it will be at least as jam packed as the first phb, probably with magic items & feats in it to boot. hopefully this guy here will be the treasure trove everyone expects it to be.

april has an arcane power supplement in it-- some focus stuff for wizards, warlocks, sorcerers, & swordmages. which means, by including the latter two classes, that they are cross-supporting their books (phb 2 & forgotten realms respectively), which is exactly what i predicted their business model was going to be for 4e. so you'll get tons more powers to chose from, feats, paragon paths, epic destinies, that sort of stuff. in other words, yeah, what everyone has been predicting.

so in the end analysis, it looks like the community has been calling it pretty accurately. i mean, fie on the fact that the answer to all the big criticisms are "in the hypothetical future..." but at least that "hurry up & wait" attitude is going to be rewarded. so yeah, all members of the various classes are a little too similar...but when you buy book "x" you'll have plenty more options! i think it is smart? a lot of the old sales model only appealed to dungeon masters-- gotta have books, but as a player, what do you care? so it looks like they are sliding things to appeal to players. if you are playing a warlock, you have a chain of books to buy. i don't think it is exploiting buyers to create products they want, though some gamers are going to whine, whine, whine. whatever. i'll buy what i'm going to use. that simple. 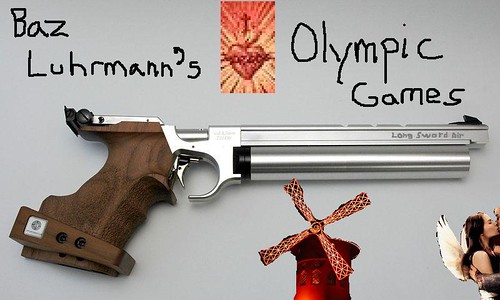 so, does everyone know about the ten meter (10 m) air pistol event in the olympics? china (pang wei) won the gold in the men's competition, & by the way, it is the most hardcore, more murderingest event of the olympics. seriously, what! basically here is the event: practice killing people execution style. seriously! you have to hold it one handed, no support-- no fbi stance, no cop stance, none of that. just point your gun one handed at a target & kill it shoot it. thirty feet (30 ft) away. which is to say, at the range most shooters tell you that handgun kills happen at. china, south korea (silver), north korea (bronze), & then america got fourth & fifth (4th & 5th). come on usa! we need to get our gangland killing medals. this is important to me, try to get it together for the two thousand twelve (2012) olympics. oh wait, the end of the mayan calender will happen before then, maybe? so then this was it, the last ten meter (10 m) air pistol event. sad. at least we picked up the gold at women's saber. kudos mariel zagunis! & the silver, & the bronze, too. eff you other countries, our ladies will sword you to death! oh, i'm pretty proud about that.
Collapse