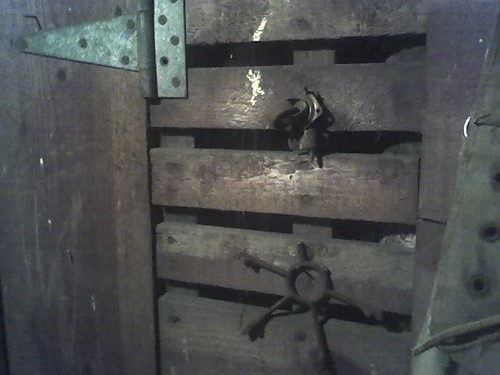 saturday was alex's bash for david. or a bash for alex's friend lindsay that we were crashing to celebrate david's birthday, in a continuation of the brand new "two birthdays!" tradition. jenny & i spent the day playing video games, running errands, going to the gym, & working on our games (well, okay, i did that. i also was the only one who played video games). alex had stated she was going to get there around ten (10:00 pm) & we're old people? so we were hoping to strong arm in at nine-thirty (9:30 pm). so out we went to bedstuy all along the g train & the watchtower & the bell, book, & candle.

the party was in a dank basement under a hardware shop; a dungeon filled with rusty gutters & the sundry junk of ages. i was pretty pleased! the only guy there was the guy whose apartment was upstairs, noah. i helped him carry the keg down, & jenny & i drank some of the beer we'd brought until some of alex's friends filtered down. i'd met her dude angela real quick once, but i liked those girls just fine. i was able to remix some of alex's slang & tell them thus that i was part of the gang! it really was kind of like college (as i drunkenly kept saying as the night went on) all hanging out in an industrial wreckage, drinking from a keg. one of the girls was from the wasteland, so we got to...what is the opposite of reminiscing? where you talk about what a mess a place was, & how you left it? that. but fondly; who can hate the wastes? besides me. i can hate everything.

people filtered in & eventually david showed up? & victoria! & there was drinking, drinking, mingling. alex showed up with jello shots! seriously, just like being in school, right? um, we should maybe reduce, reuse, recycle the jello shot idea for david's next, on wednesday. i realized i had probably had six too many after a moment, & was all "hell yeah" about it. christopher & laura showed up! there was a nihonjin upstairs that i talked to-- i have somehow developed this new habit? where i breakout my very atrophied & piecemeal japanese, then give the person my email address. i want a conversation partner! it never works though. there was a mission? to buy fourties (40 ozs). i was wearing a glow in the dark crown! a guy said something & i had to ask if he was making fun of us! he was, but i didn't go back & make something of it! so i guess it wasn't so much like college after all! back in the dungeon, i realized i didn't want to stay till four in the morning (4:00 am), but instead wanted to go home & have sex with my wife (see, we're not in college any more! sex not equating to revulsion? love, motherfuckers, know the score). the trains were slow going home, but we got there. 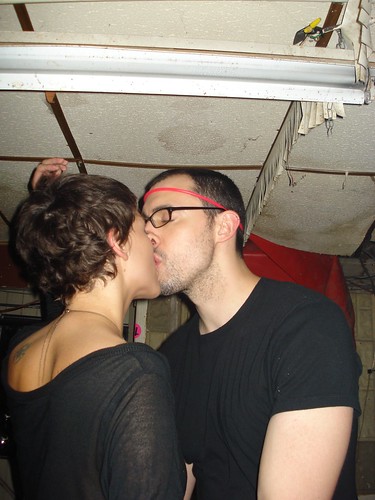