keeping it tight & battened down, these hatches. it is a trick i learned from captain nobody! yesterday was a bit rough around the edges only because of the gross inside of me, the cough & the dribble. yuck, right? all flesh is grass. but i made it through the day, & even stayed late, & went to the bank, & was minimally useful in my life. okay. not the worst, not too shabby. it was all leading up to danielle's birthday party part one (1)! two (2) part birthdays are an invention i had, & why not spread the meme? spread it. like the borg. crap. the borg. i really wish ...the next generation had gone with roddenberry's q is the fickle god, borg are the relentless devil passion play.

danielle's birthday part one (1) was being held at asian pub, or thirty-five (35) cooper as i guess the are officially called now. me &

scribble discovered that place, & it has stayed pretty fondly in my heart! by "in my heart," you shouldn't actually think about my heart, which is a cathedral to make h.r. giger stop furiously masturbating & gouge out his eyes. asian pub! where i managed to avoid drinking anything, since i'm all the king of sick. i ate a lot, though; jenny & i split some gyoza, & then i had a cauldron full of soup. a big old iron kettle filled with asian vegetables, & noodles, & tofu, & dumplings. i supped from it, & lifted it up & drank the broth from it. i am an old hand at the witch's pot! then we snuck out, left early. sick!

okay, first off. i got a bugbite on my fucking trapezium carpal, & it is itching like bloody crazy. like a ferret down the queen's knickers! i keep putting iced beverages against it to soothe the agony of it, but no luck. which brings up the point-- i'm very much an example of the adage of boys who will tough guy whenever they get really hurt, but paper cut or common cold? curl up & whimper. or in this case, mosquito bite. maybe i have west nile (again).

in other news, i'm slowly getting better at resident evil four (4). everyone wanted to tell me that i should "tough it out" & learn the game logic, & i suppose it is true. i just hate games where i have to die all the time to learn anything. it isn't that crazy past the point i was stuck at. i ended up cheating? & looking online for what i was supposed to do. it turns out, i was just supposed to survive for an invisible unit of time. i kept trial & erroring things, like "what if i push this bookcase in front of the door?" or "what if i use the grenade on a baghead?" to no effect. after that, it was smoother sailing; it was just that big clusterbomb of evil zombie spainyards that was hassling me.

i drink coffee in the shower. i drink it through a straw. i wonder about shower habits sometimes, you know? you hear tidbits from people-- "oh, i killed my ipod listening to it in the shower" & "those empty beer bottles in my shampoo rack? you mean you have never had a cold brew in the shower?" which as to the latter, yes. yes i have. i didn't dither around on the internet this morning so that i could shave in the shower. my (cheap) shaving mirror won't reliably stick to the wall, & i am sick of hearing it clatter to the floor of the tub in the middle of the night, so i have been shaving by holding it in my hand. it works fine. i also use a loofah!

this morning i kind of went overboard at the deli. i wanted to make sure i had plenty of vitamin c for the long haul, so i got a couple, & i got a bagel with cream cheese & tomato because i'm slowly working on bringing tomatoes into my diet, & while i was at it i was like, "lets go for it, team mordicai!" & got an iced coffee too. this is a true story about the time i went to the deli on the day of july (the month of julius ceasar) seventeenth (17th) in the two-thousand & eighth year of the common era (2008 ce, because that is how i roll, ya heard).

oh, & this post about white wolf getting namechecked for the werewolf/vampire rivalry concept made me think about underworld. right, they had that lawsuit? & i never found out what happened with that-- white wolf went silent, which probably means they settled out of court, right? still, i like that movie alright; beckinsale all dropping off buildings & being hot & shooting dudes & whatever. it has some moments. it isn't any good, but it is watchable. it does really bother me that it is clearly based on a terrible, terrible vampire: the masquerade game. the "abomination" campaign, which all awful gamers play through. i never did, point of pride! i try to give some credit for the asleep/asleep/awake trinity of elders, which i thought was very clever, & that the invictus book made really interesting. also, that guy kevin grevioux? he's the big, muscled, black lycan guy with the super deep voice? there is a great moment in the dvd extras where he's in his furry vest costume & he's all (in his ridiculously deep voice) "well, i have my masters in microbiology..." & you realize he's one of the script writers & you're like "aw. it is your goofy campaign!" 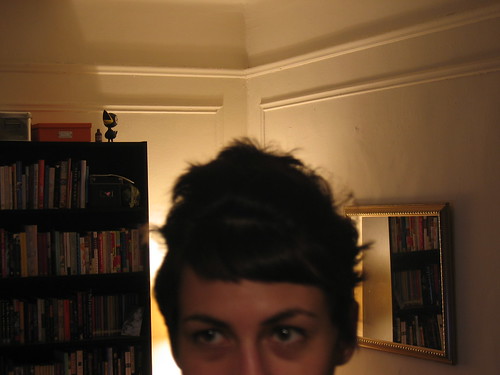 i took an alternate photo for jenny's photo-a-day for three hundred sixty-five (365) days thing. i think it is the superior choice! yours is the superior intellect, mordicai. it is, i heard about it, now whip up a sciencey shakespeare quote & have at you! lay on, macspock! oh, grim, bad, horrible, horrible. hey, speaking of horrible, just like everyone else you know, i am quite smitten with the new doctor (dr) horrible's sing-along blog. which comes as absolutely no surprise to anyone at all, not even the cheap seats or the peanut gallery. earlier today, caroline took me out to dinner at miracle. i'm almost better. stupid lingering cold. post-script (ps): inside of jenny there is a duck. & inside that duck there is a golden egg. & inside that golden egg there is a black hole. & if you are strong enough to resist the event horizon, & tiny enough to walk across the black hole's surface, you will find a pennant, & on the pennant are the words to a magic spell.
Collapse