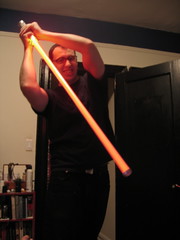 so something interesting has happened the last couple of times i've been at the gym. spike has been showing the star wars prequels on fairly heavy rotation, i guess? & so i've been catching them in spurts & fits, & if you know me? you know that once i hear the whirr of a tractor beam, or the hum of a lightsaber, or the scream of a tie fighter, that i'm done for. done. for. so i've been watching it, & i've been lucky! i keep getting the very begining of the second (ii) & third (iii) films. you know, jedis freaking out & being sweet. jumping out million story high buildings, cutting up fools with laser swords, basically being what jedi ought to be: awesome magical warriors. they aren't judeo-christian paladins or any stupidness; they gang right up on dooku. & the moral of the story? the prequels are kind of great. of course, i don't really mean that. but, but viewing only the okay parts, i'm filled with that glow. the motherfucking force. i've never hated the prequels as much as everyone else. i can squint. i can ignore the actual plot, & well, most of the movies. they are terrible as films. crap. back. to. ignoring. anyhow, i walked out of the movies not heartbroken. poisoned? but i don't want to let george lucas ruin star wars. frankly, it is bigger than him. that is what a mythos will do, it'll slip out of your hands. i want to dwell on the mysical jedi knights wandering the galaxy, right? what i'm saying isn't anything new. there are edits floating around out there. removing jar jar (see, i'd forgotten about jar jar!) or whatever. good. good. the scene with obi-wan & anakin flying their proto-tie fighters towards the flagship? fun. adventure. i'll take it! i crave it.

oh, martis dies, tyr's day, thing day! the last gasp of freedom before the plunge onto stygian darkness. before i commence to rage at angels both on stage & in life. nerves of steel, though, cables & girders, knit together. i'll be fine. okay, i am a little stressed. i hate theater! i like having done a play much more than actually doing it! i like breaking into the parts of the brain that shut down in front of groups of people & pulling out sparkplugs, switching them around & rewiring. first then when i got home, jenny & i (but mostly jenny) put in the new air conditioner (a/c) & threw out the old. i celebrated by doing a nice clip at the gym & then picking up sandwiches for jenny & me. on my way home from work i'd picked up coffee, which we'd not had for some week now, but i should have picked up shaving cream too, since we are out out out! & i did shave, & for the first time in like a year i cut myself shaving. & not even on a part of my face i was shaving, but up on my cheekbone. fucker! then i watched jenny play some bully, played a couple of stars worth of mario galaxy, read some warlord of mars & went to bed. i think i had dreams about being culturally deaf? also, my wedding ring sparkles like evil hematite. sweet!
Collapse