it really is a good pitch. the joker is dying from a brain tumor. & so what does he do? well, he is the dcu's (detective comics universe's) greatest chemist, right? so he whips up a cocktail, triggered & created by & from the prison's restraints, to jokerize the entire supervillian population. not bad for a gag! the problem here is that it kind of sucks. first: no batman. seriously, none, nada, zip. he gets like, an appearance on four pages. mostlty it involves nightwing & oracle...& shilo norman? what the fuck? also, lots of killing multi-man, both by the joker &...shilo norman? what the fucking hell? & all of the villians who are joker gased are...d-list baddies who i couldn't recognize if you gave me wikipedia & said "go!" way to drop the ball on things, guys! also, for punking all the heroes; black canary gets her ass kicked by sidewinder? or copperhead or some guy with "snake powers." which reminds me of the new blue beetle's line in the recent teen titans when they say to him "oh, you look fine, not a scratch on you, you didn't have a guy to fight?" & jamie says "oh, i shorted out the teleported with a localized tacyon burst & the other guy...had snake powers." which was pretty effing hilarious. by contrast, ted kord blue beetle's memoriable line here is "the the bug's not built for speed...or power!" so what is it built for, ted? laughs? oh, the biggest failing of the comic: never once is anyone funny. not once. not even a little bit. boo!

vegetable weekend. i had a fairly productive saturday morning, despite the fact that i might be counting collecting stars for mario galaxy as producing. i also used bullet points, & hit the gym for a not to shabby slam at the weights. i...i can't remember what i did after jenny got home. seriously, you are supposed to be able to hold onto the past for a few nights, mordicai! all eroding away under my tender care. the inky, emerald sea lapping up a sugar beach. wait, i think what happened was that jenny & i eat "chip shop" & watched vh1 "i love the new millennium" episodes. seriously, my twiggy memory, you've got nothing for me? sunday morning was nice; indolent, even! fetched us breakfast & then splayed out on the floor playing wii while jenny read. gym again, & then play rehearsal. yikes, fucking the play. dress rehearsal tonight, doors open tomorrow. caught a few drinks at the pub with the cast, then thought better of another round & bounced home to watch jenny play bully. nice & lazy. since this week will be a whirlwind of theater, i wanted to get some crunch time in with my wife. note: i often will superfluously say "wife," because how funny/awesome is that?

when you are having a bad dream, it lasts forever. even if it is just a quick spike in your rem, a descent of just a few moments lost sleep, it goes on & on. which is the quick path to immortality: the nightmare world. i can spend another eon writing on top of the sheets while jenny sleeps on hopefully undisturbed, just living forever. disconnected. teeth falling out. under the bed & sitting on your chest. physics bent & crooked. i think it is the heat that has been making them surface harder than they've been in the past few months? waking up into a torpid, sweaty haze with the memories of the sea serpents of the unconcious roiling in my soup-can skull. check the door to make sure it is locked. down a glass of water & fill the cup back up & hit the hay again. the hay from the barn from every spooky story. "he isn't a serial killer," the guy says, "he's a spree killer." thanks for everything, noodles! 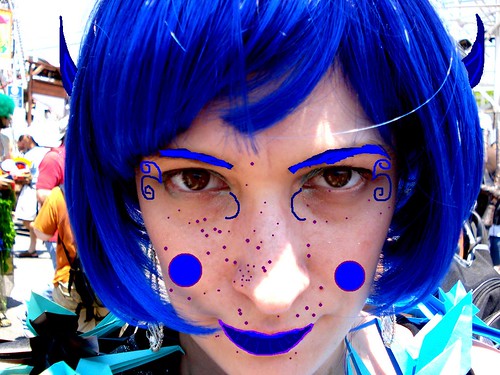 ranai is a kind of blue elf, maybe?
Collapse