so the people i've most talked to about my name change so far are the delivery men, & they've been pretty blase & congratulatory about it. i don't know-- i read some of those men-changing-their-last-name things online, & guys were all "yeah, i get a hard time about it..." but that hasn't been my experience at all. i don't even really get a "oh that is...interesting..." from anybody. i'm sure new york being cosmopolitan has a lot to do with that, but i also wonder about how ethnicity & immigration factor in. i'm just musing as i had a moment with the ups guy, who is sometimes a jerk, but was pretty genuinely nice just then.

oh, & another work aside. our old cop has i think been reasigned? she isn't here any more, at least. which, really actually, kind of sucks. she was okay-- she hung around a lot, but she also bought our vampire books, & was far from the worst. also: she got rid of all the homeless people. now that she's been gone for like a month, there they are, all back to taking over mcdonalds & the stoops. all i can say is that she did her freaking job, & that is always a nice change of fucking pace from all the slack ass human beings that normally rule.

last night, jenny & i watched sweeny todd: the demon barber of fleet street. i liked it about as much as i expected. which is to say, alright. there were some moments between todd & lovetts that i liked though: i thought they were very old school white wolf, actually. what a pair of vampires! complete with different levels of humanity (todd will kill anybody, lovetts only thinks you should kill those who wrong you), the loss of humanity (...untill lovetts starts seeing a profit in meat...), frenzy checks (todd todd todd!), & the whole that thing. i liked their moments a little better than alright. so there you have that. 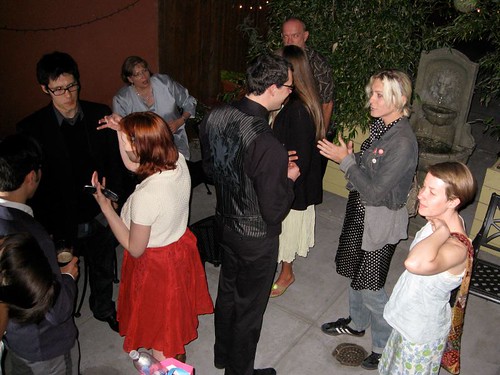 i'm jumping around a lot. sue me! after the wedding was the afterparty. phew! okay, i was sober up till the ceremony, but that went out the window as soon as we left the room. gulp, said mordicai to the champagne! then he said it to the wine, & the vodka. i wasn't anything other than a little bit tippled at the wedding, though. i kept on my game, kids! the after party, well...not so much. yeah. really, i don't know where the bend occured. i guess the last of the nails in that coffin was when we were shooed off the patio & into the bar proper. i don't think i was alone in my inebriation, & i feel bad for all the people who met us at the afterparty but hadn't been at the wedding-- we were a couple of hours of open bar & more than a few bottles of wine ahead of them. kingtycoon was in love with theresa because i gave her the lidda miniature-- reasonable, but i had to shelter her for a little bit. the rest is fuzzy, but there was a cab ride with carla, once jenny convinced her it was time to go. carla had left our overnight bag at her apartment, so we stopped by there, & then we went to the ritz! our room had rose petals all over it, & we stayed up late into the morning (if you know what i mean). 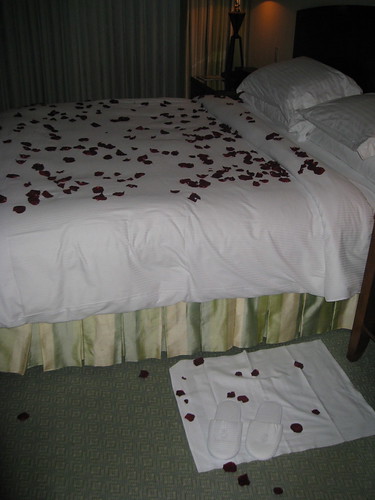 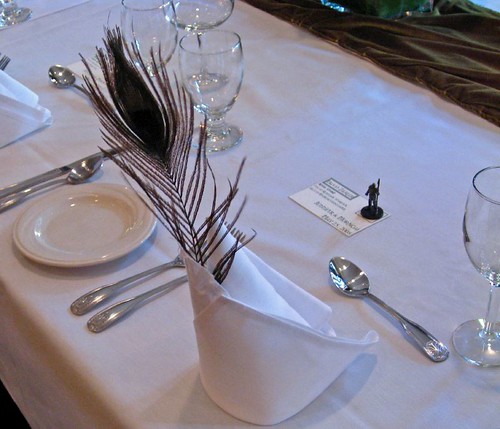 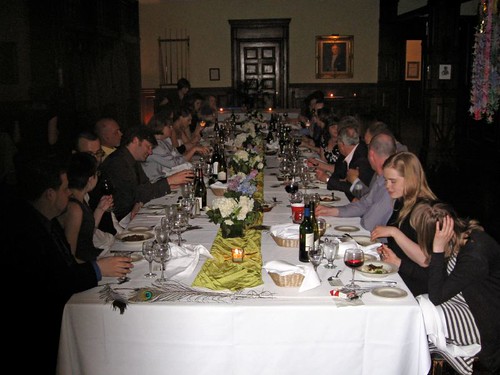 the first course was the salad, & the salad was the course most remarked upon. it was...hell, i don't know? mint? or cilantro? or both? with eggs? & asparagus? it was a whole thing! i liked it. then there was a pasta with some...things in it. that was also good. then there was the entree, which in my case was fish. the fish was okay? but it was just fish-- none of anything else. like, the dish from the first chef had some polentta or whatever that i missed. but! there were these cooked pea pods! those were also very tasty. for desert, the club had a pretty delicious ice cream sundaes, but the real winner were the petit fours that kira & her clan made. hey, i'm part of kira's clan too, but i didn't help. there were savory ones for me, though, since i hate sweets! 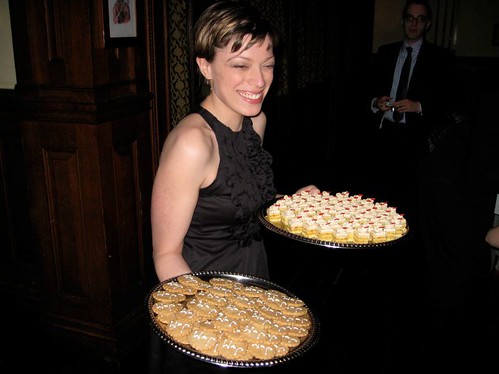