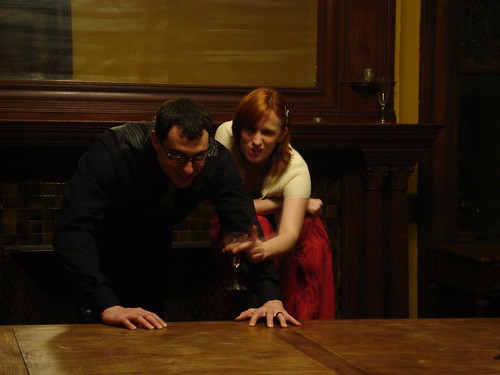 starting to talk about the wedding is a bit of daunting task, so i might go about it in a disjointed & bite-sized manner. for instance, now i'm going to post some pictures of THE MEETING. the venue for the wedding was the montauk club, which is a gorgeous royal tenenbaums looking building covereing in grotesques & bas relief, & hardwoods. very nice joint. the room that was originally used as a stageing area for jenny getting sewn into her dress (seriously: zipper break, catastrophe, but averted by the herculean efforts of kira's mother) was a nice little board room, & danielle got it into her head to have a MEETING. it went like this: "guys! guys! meeeeeting! les' have a meeeeting!" & so we did. we shouted about numbers & strategies & rubicons for a while. it was pretty great. the clip below is just the tail end of it, with me returning to the festivities.

one of my eardrums is all stuffed up! i don't know how that happened, like-- maybe it is water from the shower? but i don't hear anything slosh around. what else clogs your ear? wax build up? are bees living in my head? i knew reading neil gaiman & bird chick's blogs were going to do something awful to me! anyhow, it is bugging the shit out of me. bugging the shit. also, this morning on the train i saw dudes get into a fight, i think because one guy was wearing red & the other guy blue. like in that awesome babylon five episode. it wasn't that awesome though; it only lasted a stop. then the one guy who stayed on the train acted like he was maybe going to try to intimidate me, since i'd been openly watching them go at it? but then i think as he got close to me & saw i was much bigger than him, he changed his mind & sat down. anyhow, there are a lot of boxes in the store today, so back to the millstone! also, only one of the boxes had presents, knives from pamela. i was hoping for my elric books. with the strike-out of powell's sending me an email to tell me they were lying about having three hearts & three lions in stock. 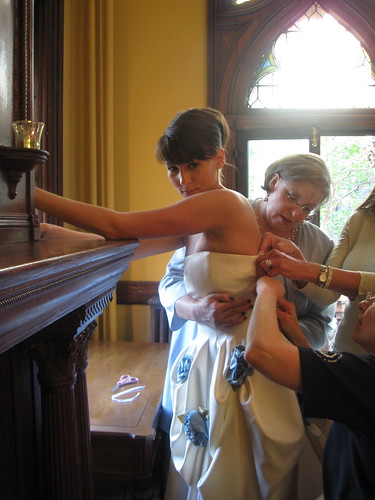 actually, the only real drama was that jenny's zipper busted open. see! see! from day one, i refused to help her put her dress on. it was a little bit hard, & she was like "just tug it!" & i said i would not, on account of that if i did, i'd probably tear it right out. well, for the record, i didn't tear it out, somebody else did. it wasn't that big of a deal in the end; the call was a little bit close, but she was sewn in & was ready to hit the floor just as the cocktail hour started. i was pretty sober through the ceremony- i had a glass of champagne, but drank it over the course of an hour. 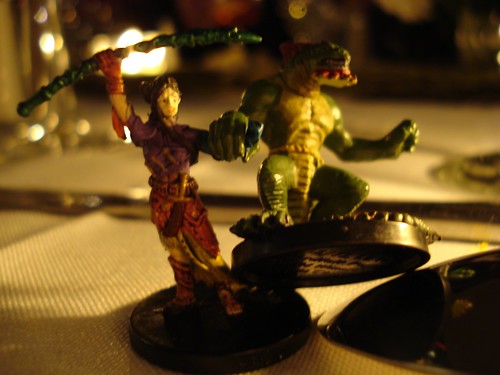 jenny came up with the idea, & if you ask me, it was solid gold. alchemy! she wanted everyone to have a little dungeons & dragons miniature as part of their place setting. see how our marriage is representative of us both? i should also point out that the other themes were of course, cranes, scarabs, & peacock feathers. mike & i picked out the minis from his collection of doubles, suiting them to the appropriate guest. the short guests got halflings & gnomes, that was the first thing i decided. i gave theresa lidda, which enflamed kingtycoon's passions. my friends were the only ones to get non-humanoids-- katja & olive got some messed up demons, for instance. in addition, everyone got an "enemy" & an "ally" & they actually did mingle a little based on that. success! 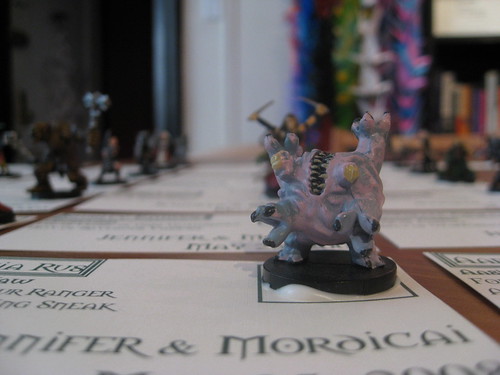