i'm thrashing in low-level wreckage right now! i sort of hurt my back a little last night at the gym, for one. i wasn't doing anything crazy, & when i felt the twinge i bounced, but now i'm still all owie about it. & then my stomach is hurting now too! it just happened on the train & hasn't let up. so i was forced to go across the street to the shitty deli to get some seltzer, & while i was at it, i got a blt. on the plus side, i ate slices of tomato, on purpose, so my widening of my edible horizons is continuing to go well. on the downside, that place is fucking bullshit, & they charge you a stupid arm & a leg. seriously, what other deli charges as much for shit? none, not even pricey joints in manhattan. frustrating. & my stomach still hurts. oh, though. peter just walked in, so maybe he'll distract me with entertaining stories. also, i've been able to get some work done on wedding stuff this morning. because i get married in a month. how is that for brain-freeze?! 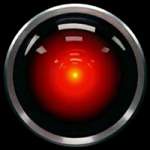 so there i was peeking up at the cctv being fixed & i got to thinking about it. & about the panopticon. or really, sousveillance, the panopticon turned outward. let me explain lest my thoughts run ahead of me. the government, & corporations, are spying on everybody. they are watching you, & not in a "crazy spy satellite" way, but rather in a "did you tell 7-11 it was okay to video tape you when you walked in? because they are" way. this is supposedly for your safety, & generally is: video recording can theoretically help prevent theft & the perpetration of crime, & aid in the capture of criminals. maybe they can. i don't even care about that, for the purpose of this discussion. sousveillance is the idea that you making your own recordings can also help your safety, or at least that is the theory. this goes down the road that everyone having a cell phone camera is in fact promoting a more honest world. i tend to agree. in fact, i am willing to equate guns & information on this one. colt made them equal, & also, kodak. this is why crack downs on what private citizens are allowed to film should be high on the aclu docket. again, guns should be too, but now i'm starting to dovetail into my next point, which i'll make now.

my "radical" opinions on politics tend to seem contradictory. i value individual empowerment & also the ascent of the group. this has semi-tongue in cheek been referred to as the post-apocalyptic libertarianism versus post-human fascism. but i have often been construed as authoritarian in a way that i expressly am not. in fact, it bears strong mentioning that i idealize the hive-mind. sneer if you will! but all the distributed information accumulation & editing is really creeping up on everyone. wikipedia is just a visible manifestation of this. so is youtube. so is livejournal. pretty much the internet from top to bottom. tiny hands making short work of heavy loads. now, how can i think democracy equates to kakistocracy & still think this? well, i'd like to refer you to my friend bayes. the weight of credit along side the frequency of occurrence. it might not be mathematically perfect, but heuristically i think it sound. so what i'm saying in a nutshell is that it is incumbent on the individual to keep tabs on the figures above him as well as on the peers around him, & subordinates below. this is the transition from tribalism to hive-life. get with it. it is an important one.
Collapse