"I haven't read all of this but I am very interested, per our conversations. The talk about "races," which are totally non-existant in the "real" world, but are most closely modeled by (as your example gives) dogs, is a clever. I have some such stuff-- we talked about this, but Mike, this is also of some bearing on you-- notably things like Ghouls & Woses & Karnies. I wonder sometimes about making these more prolific, but I admit to fearing the traps of "common fantasy," where readers or players might mistake such things for elves & orcs (though purposefully blurring that line-- demihumans, emphisis HUMANS, right? & they can interbreed, too? Lets talk about THAT DnD!) & thus be led astray. I do like the stretching of human variation, though, I like that a lot.

I will happily confess (in private) that I enjoy stretching the skin of my Oubliette setting over the bones of different rules systems. I find there to be profit in such undertakings-- often, restrictions on artistic endevour end up benefiting the system. So I have sort of been looking at "races" as an opportunity to explore the "super-natural" races-- Karnies are touched by the legacy of demonism & bloodmagic of their ancestors, Woses are almost animals, in the spiritual sense of totemic animals, Ghouls are grave-reeves & walk the boundies of the quick & the dead...

I think there is a danger of putting too much weight on "races as merits," or what have you. It is interesting, I have to admit, but again, some concern must be given to the lowest common denominator. "Merit: Northman-- you are bigger & stronger" isn't far from "Merit: Black guy-- you are tall & play basketball" or "Merit: Chinaman-- you are good at making small things but beware opium." Not in our eyes, but in the eyes of potential players. Stupid players! Must be culled. Social merits, or better yet, suggested merits, (merits-- feats, powers, edges whatever) are a good way to go. I think they accurately represent the range of variance in the species, & reflect somewhat how actual breeding works. Then again-- direct counterpoint-- Klial DOESN'T work this way. Which gives you an interesting axis to work on.

I do wonder about preserving plausibility. I don't know, I am interested in the lines of suspension of disbelief. It seems that things like "Dragon People" ala the new guys in 4e are a harder pill to swallow than other things, even things that are equally crazy, like girls with bunny ears (per Final Fantasy). There are levels of almost Jungian plug-ins, you know? Which is what I'm trying to toy with. I am finding you can stretch a lot of things you wouldn't expect, but other things, people get leery of. In general, I want to provide something for players to "latch on to," something to identify with.

Which oh, I didn't mention this at the start of this, but having a section on "Identity" is a fan-fucking-tastic idea. It is a great place to put things that I've been awkwardly shoe-horning in under headings like "naming conventions." These are topics I want people to deal with, but I also confess to having a hard time actually putting them into the game. Well-- in the last campaign, Bernie's character's family was a big deal. Though I don't know how accurately I portrayed them in accordance to his wishes. Maybe things like set-pieces could again (oh trusty set-piece, newest weapon in my terrible arsenal!) work here, or hey, maybe putting the player in the chair of their family members. I don't know. Just riffing, & getting off the subject.

Again, I've mentioned this to Kingtycoon, but just to have it here: I have been sort of going (in this campaign & the last) with nationality & ethnicity overlapping, except when it doesn't. That is to say, that Blaine, or Malake, have their own ethnic make-ups, Blainesmen & Malake-people or whatever, that are generally invisible to the character. Unless you are something like a Rood person or a Karnie or a Pard, where your ethnicity suddenly doesn't jive-- you are a vegetarian Sikh or have to keep kosher, or whatever. This is because I am lazy & also importantly because I am getting away from made-up names. So that is there. Over-all, I have the continent broken down by colour-- colour, but again, not mapped onto real world skin colours, so the white people are likely to have the pronounced brow ridge present in the real world in black people, or the brown people are likely to have the noses present in semitic people. Sort of the Mister Potatoehead approach to ethnicity.

You know what? Order of the Stick. Order of the Stick has the "western" characters in a grab-bag of colours-- Roy is black, but is clearly the "same" as Hailey. They are, frankly, "American" in ethnicity. Paizo is doing something similar to this as well-- They have some collapsed multi-ethnic, cosmopolitan empire. I have to confess, I am pretty interested in that. I am thinking about how to diversify my game more; maybe it is just as simple as DOING it. I've been good at bringing in the brown/white mix of Malake I think, but why be so tame? I ought to stop, ought to have more recent migrations. I have been saying I'm going to make this next part of my game more far-reaching, more exploritory: maybe I should bring the same themes to the world at large.

wednesday television night was a pretty good one, this time. it started off a little wonky-- jenny hadn't eaten all day & couldn't understand that i had shuffled things around to make the errand i had to run work out in as much time as it would normally take, but i was able to get to mike's, pick up his donated liquor cabinent, get food, & get home in plenty of time. then we had a special guest: lilly, whose pictures you see here. the first thing we watched was the beauty & the geek clip show, since rob & big is gone. gone! woe! the clip show sucked, like all clip shows do, & i also ate way too much. luckily, i had a digestif! we all did, clink. then it was a pretty stellar episode of how i met your mother with the beek. it was pretty fucking funny. followed up by america's next top model, which is generally the backbone of television night, but has been faltering pretty hard this season. but! swooping in from the wings! well, we had a vote, & paradise hotel lost & shot at love won, so we watched that awesome, colossal mess. it is designed in a laboratory to be best when viewed under the influence of alchohol. it is pretty freaking great, & this ratboy guy is super weird & hilarious & is gonna knuckledust somebody next episode. everyone is awful! it is perfect.

plus, maggie got me a birthday present! a mate gourd, & mate for it! i really like mate, both as a taste & an idea. it is the other caffinated beverage in the world, after coffee & tea! she got me some, & one of the gourds you are supposed to drink it from, & a metal straw like you are supposed to use. all of it! it came from south america & i am going to drink it all! & then i am going to make everyone in my game world drink it all of the time. but look at these pictures, yikes. i need a haircut crazy woah, i am starting to look like one of the "before" geeks with this crazy stuff on my head. maybe i will call to make an appointment today!

the harrow deck by kyle hunter. 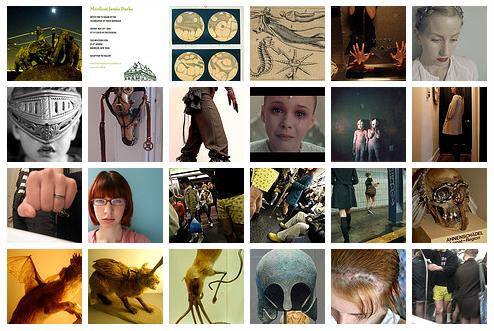 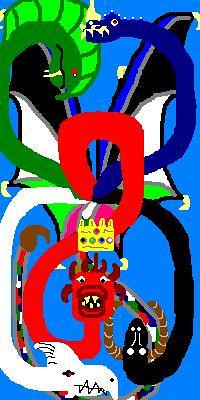 hey cory. that is some pretty strong language of entitlement. i thought it was kind of sleazy of you to source an article that sources "rumors," but it does seem correct that the new open source license (the Game System License- GSL as opposed to the Open Game License-- OGL) will "poison pill" the old license, making it so that companies can not publish "3e" material once they start publishing "4e" material (quotes, since it is by license not edition). okay, now listen. i'm a big open license fan, myself. i think the proliferation & standardization of the d20 rules was a big, visible success for open gaming-- heck, open sourcing period. but you know what? i don't think it is reasonable for you to get pissed about them not doing it the way you'd like. disappointed, sure. disagreed with, sure. but to call it "sleazy" is a bit much. more of the "not free enough" attitude. listen, part of the point of open sourcing is that it is a viable model for success, not charity, right? so it should be self-correcting, should tend to fix itself over time. well, i'll tell you what. i'm all for expressing to wizards of the coast that this is not the best way to go. what are your arguments for it? i'm curious about such things. wizard's obviously wants 4e to be supported, & then after that 5e, & so on. heck, i think you could let things just wither on the vine; if the gsl didn't poison pill the ogl, i'd expect that in a few years time, people would stop with the 3e books anyhow. & how about this as an argument for the open source position: paizo & their use of the ogl. they're going to ogl, at least for a while; they make good products, & if you nullify their ability to produce 4e content, you are depriving yourself of excellent secondary support. you know, like how a good dragon article back in the day could have given me a good idea for a character, thus creating a whole new market-- "oh, i like this prestige class here! maybe i'll do it, & i'll get complete dude & try to convince my dm to let me use alternate rules from unearthed arcana!" or whatever. i guess my point is that i totally support open sourcing the game (even though i now run the storyteller system, which isn't open licensed at all, wish it was) & i agree that a poison pill isn't a good idea. & i think it is a bit of a dick move to go after wizards of the coast & call them names. they can run whatever business model they want. the ogl was revolutionary in the first place. i think it would behoove them not to fall behind in the revolution, but that is their call to make. anyone who wants to follow up on the he said she said of it can go to the forums here.
Collapse