yesterday i decided to get food stuffs from the bakery, & while i was there i over-heard the super-macho mister brooklyn guy who works there going off on what sounded like the most racist rant in the world (tm). it was crazy; he was half mumbling, to keep it on that side of the counter, you know? talking in the tone that means "you shouldn't be able to hear this even though you can" that some people adopt when they are going to say inappropriate things. it went something like:

"i just hate their fucking kind, hate how they move here & then after they live here for like a year they start pretending like they belong here. you don't belong here! you ain't part of new york. why don't you go back where you came from! we don't need your type here. they're just a fucking bunch of freeloaders. i can't stand them. we should've never let them come up from the south. seriously, they should have to go back south & stay there. yeah, i just fucking hate the clintons."

it was magical & i cracked up laughing. i had been a little shocked-- i mean, i've gone into the bakery a million times & that guy has always seemed pretty stand-up. then again, in neighborhoods like this, the options are either tolerance or secret resentment, so i wasn't so much surprised as a little dissapointed. then that clinton thing pulled out & it just blew my mind. fucking hilarious. so that was pretty great. 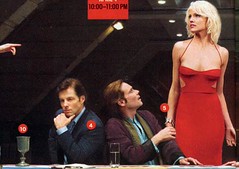 jenny & i weren't in the most lucid state when we watched the second-most recent episode of bsg so we only last night got around to watching the new one, sitting down & watching one right after another. man, how nice watching chains of episodes is. dvds of television shows are the best. but that is neither here nor there. firstly: i am very excited about the cylon revolution. like, from the very first teaser, i was all about it. i have no idea where the show is going to take it, & at this point i trust bsg enough to let them run with it. the questions & doubts are suspenseful! hooray. seriously, a ton of centurions blowing everything up with machine guns? sentient raiders? civil war between the models? interesting! the one big problem i have is that i'm not sure which six is caprica six. anyhow, this season is totally up to snuff, totally on point. as to the most recent episode: fuck cally. & how can you be surprised? she's been taught time & again that she can murder without repercussions. cally & cain are on the same page. so you know what? yeah, i would have done the same. now galen can rise as the demagogue. also, lee in the government-- i see bright things ahead for that boy. oh, i got the fever baby, cylon fever.
Collapse