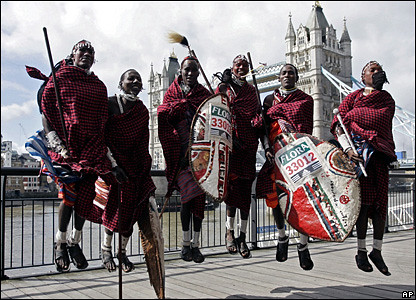 woah, yo. the maasai guys who ran in the london marathon are fucking awesome, not least of which because the chief, isaya's, diary is better than everyone else's stupid diary. it is nice to have some guys with genuinely different viewpoints. i want these guys around to troubleshoot all my sick-headed problems. "guys! what do you think. angels in the walls? crickets?" & they'll think about it & probably having something pretty awesome to say. probably about me being right. anyhow, i would totally read isaya's blog feed, is there a way we can make that happen? what? probably not? fuck. there goes all my hopes & dreams!

In Trafalgar Square, they asked: "What do you think about the bronze lion over there?" But what can I say? It's not a real lion. I don't mind because we are interesting to them but I am not here to be a show, an exhibition.

We heard about showers before, in a briefing about the country. It said be careful - when the shower is hot it is really hot, and when cold, really cold. This is true.

I miss meat and blood very much. Not vegetables because they are food for a woman. There is milk here but blood is better because it gives energy. English tea with sugar is good and we tried Coco Pops, but the nicest food is croissants.

well, listen, i'm watching an old episode of colbert report & i know a couple of things about jesse "the body" ventura, & reading his his wikipedia page & i'm pretty sure that jesse ventura should president because he's acting a little bit crazy, shouting about mexico as the home of the revolution & how he's a surf bum, & how the second amendment is there not for hunting but to threaten the government & how he hates the predator & i am probably not kidding. i was thinking i might vote gravel for libertarian but now maybe i'll write in jesse ventura. let me excerpt from his wikipedia page:

Later as governor, he came to support a unicameral (one-house) legislature, light rail public transport, property tax reform, gay rights, and abortion rights. While funding public school education generously, he opposed the teachers' union, and did not have a high regard for the public funding of higher-education institutions. Additionally, Ventura supported the use of medicinal marijuana, advocated a higher role for third parties in national politics, and favored the concept of instant-runoff voting.

uh...mostly i'm a fan of that. i don't agree with the stance on higher education but pretty much that is spot on to me. i am not really fiscally conservative; i'm pretty much in favor of huge taxes against property, but as far as ethical stances go? none too shabby. oh, & the saturday night live episode from last week was pretty fucking awesome. so how about that, bitches? p.s. in forty minutes it is going to be my birthday.
Collapse