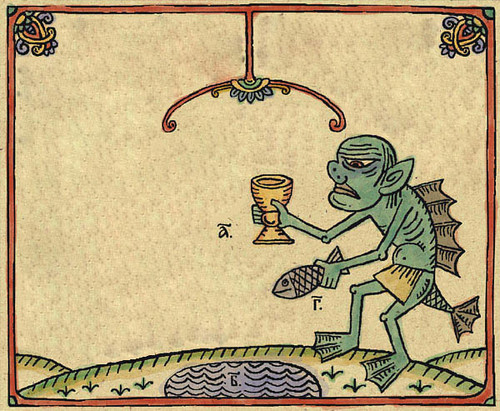 last night's game was a bit of a pick-up, since mike was out in the californian empire & the week before that tracey had been emergencied. to make it up in balance, sam & tracey's friend lisa played the lovely sophie, the bedslave who had already started to fall into lorelai's clutches...or vice-versa. lisa wrote a paper on sexism in dungeons & dragons once! the group had been waiting for audience with the noted procurer of humans, jan demilion, & in short order he saw them (with his girls the aforementioned sophie & sports figure diti bedeviled). first a heady brew was served: balthazar & lorelai drank deep of the fermented shark's blood, & then after aperitifs it was to dinner. pufferfish, haggis, monkey brains, ube, foie gras leeches (gummy worms as props!) sea urchin on the half-shell, that sort of thing. yum! delicacies. oh, but that rumbling you heard during dinner? ah, the ancient karnak machinary in the guts of the building acting up. you see, the cunningly wrought mirrors that reflected the light from the giant candelabras on the second floor to the whole building? the giant harp whose strings ran the lengths of the walls? not the only machines of yore wrought in the building; unfortunately, demilion bedeviled comes equipped with power windows & power locks! trapped!

jan & sophie distracted the party from going prowling looking for lock mechanisms: who knows where they might be (though balthazar mumbled something about dragon's eggs & imp crystals), or even worse, when danger might strike: the demilion theme takes its name from the semi-tame prides of cave lions wandering through it, & jan let them know that a pride had gotten trapped in the lower levels, same as the players had gotten trapped on the upper levels. so instead, a night of questions, seduction, stories, temptation, jealousies & the strange riddle that came to dominate the night: the parable of the fish-wife. what could the fish offer you to go below the waves to be his bride? & then, with sunrise, the gates opened, & rubbing their eyes everyone went their own way, parting till next they met.

also, sam got his birthday present. we like to give out geeky, character themed gifts, & since he has made a big deal about damocles' pauldron, we got him one. see, his character is one-armed, & his large pauldron lets him maintain the illusion of symmetry when he is cloak covered. eventually there were a lot of...interesting pauldron pictures taken, but here are some from when i got it at the store & was taking pictures to show the other players, before sam even had a twinkle in his eye for it. including one where i have it on upside down. 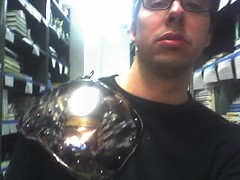 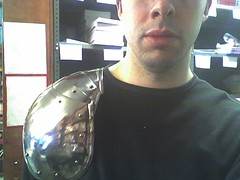 more of a foul tip, really. at least this was sort of useful? got into the civil court for one! found out, after some run around, the correct floor. correct window, signed up to speak, spoke &...they told me to get some more paperwork. the papers i had printed didn't tell me what to get, but they gave me some stuff & so la la la. i went home to pick those papers up, so i could make photocopies here at work. that actually was the most frustrating part of the experience, as i saw a b75 bus, knew it went to the slope, & hopped on it hoping i was cleverly taking a speedy route. nope! it was pretty roundabout, & the f would have been better by a good long shot. still, there is slowly accumulating all the needed business. in a slow, annoying snowball, but sitcoms have led me to believe that public offices are always like this. so i'll grin & bear it & head over tomorrow morning & hopefully grandslam it.
Collapse