i usually read pages & pages of comics each week. sometimes i think about how to record them, how much review of them to give. how to be more participatory in that kind of thing, since i've become scrupulous at keeping track of the books i read. maybe i'll try just keeping track of what i've read that week, without review or anything. lets try that, this week! heck, i can even give them letter grades! word of warning though, i might come back & edit in a couple more if i get a chance to read them. also, i'll try to keep the grade inflation somewhat in check; there are plenty of rubbish comics that just get an f right out of the gate. special thanks to

kromelizard for being generous lenders.

Open to: All, detailed results viewable to: All. Participants: 37

big dog is awesome. how awesome? awesome enough to have awesome parodies.

Open to: All, detailed results viewable to: All. Participants: 14

With 0 being a schwarzeneggerian predator & 6 being a giger alien, where do you rank yourself?

wow, i didn't expect to be as impressed with this as i turned out to be. i have liked his stuff a lot before, but those have been encyclopedic, & not really original creation-- more interpretation. well, this brushfire book is his illuminations of hell, & i'll tell you what, he really does a spectacular job. the book is an oversized, awkward portfolio, but that i think ends up being in its favor rather than detracting (as it easily could). i am curious to know how much wraith: the oblivion there is in here, or how much of this is in wraith, depending on what came first, or whatever. it certainly puts me in a mood. there are plenty of tiny details that aren't mentioned in the text; the torn out hearts & broken blade halos in particular stand out. one thing that did sort of bum me out was that there wasn't a "pay-off" picture-- some two page spread of something particularly awful in the pit, for instance. i guess comics books lately have me expecting things like that? i won't get tricked into saying which of the pictures were my favorite, since they all certainly had their own charms & who knows how it will slip around. i like the illustrated book; i like the profusion of print & paint.

oh! in the hospital. that is where i learned to read. i read green eggs & ham & i was wearing little kid's hospital gown stuff with little spacemen & flying saucers on them. i think i was in because maybe one of my testicles didn't drop right? tentacles. or i could totally be inventing that to sew the events of the past together. one time i got stitches under my chin for jumping off a crib in the house because i was a boy from krypton. well, we all know that story, & it worked out in the end, after all. kneel! oh, so anyhow, assuming i get my situation in check early enough tomorrow, i'm going to pop on down to jay street, down to the courts, & finalize my name change paperwork. i'm going to get rid of some baggage & take a modified version of jenny's last name, which she'll also adopt. we'll be our own little clan. mostly i want to have the same name as our offspring, trusting i can reverse the momentum the made me not give a fuck about my biologicals. anyhow, i'm sort of rambling on since there isn't anything to watch on on the television & i don't really feel like reading yet. since i'm kind of into a cup of wine or five. wait, so i was going to say something about the vice of sloth, & i was looking up its latin name (acedia) & accidentally stumbled upon this picture of a sloth: 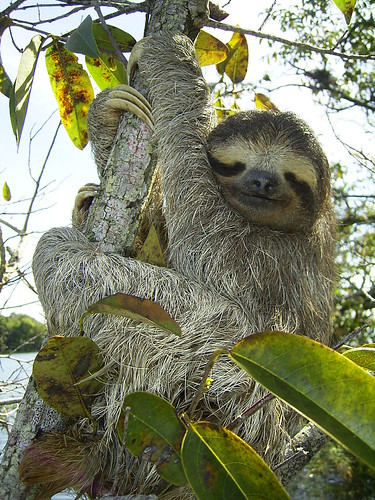 which okay. i'm not the kind of creature to comment or be particularly interested in. (oh crap, are mos def & talib kweli just singing about their dnd game or am i making that up?) anyhow, this slot is fucking awesome, & i want to imagine it is a megatherium all giant & friendly. wait man, am i freaking out about sloths? okay now maybe it is time to tuck the internet away for a little while. anyhow i still like tori amos a lot but my place in heaven is worth giving up those kisses. but maybe you were confused about my place in heaven. it is often the case. here is my crown, here is my book, here is my sword. & you brought ice cream & a collection of wet napkins? this is the weirdest. hey, did everybody go through a weird trip-hop phase? i did one time!

hey i invented this thing where i'll just keep drinking wine & i've set jenny's ipod to play just the mountain goats, since otherwise it was playing like prodigy & stuff. she's lying on the couch behind me playing with my hair while i fuck off reading stupid nonsense about whatever, the future, & then running my fingers for no good reason. none! weird how today i was talking about my jadis, my once upon a time. remember how for years & years i'd just throw up ever morning or so? just couldn't handle going from dream to world? all broken glass & shaggy dog. there is a point at which the weapon dulls. i'm sharp inside. try me out for size, america! i'm not pitchforks, i'm swords. i'll not swindle you with the infernal when i can befuddle you with the angelic. oh us with our halos of words you've never seen. anyhow, i'm a little lost in the sycamore trees most of the time anyhow, or caught with crooked stars. anyhow jenny keeps laughing at what she's reading (about soviet poets?) & just like she mostly ignore me when i talk at her about speculative fiction, i'm mostly humouring her. as i guess at the same time i am confused that she isn't laughing along with the puppet strings. me, i'm all caught up in them. i'm pulling on the puppeteer's hands, at this point. invoke me & be demolished.

i have been sick with fat ideas. man, let me tell you about the evil rainbow? but i can't. button that down in this gosh-awful cardigan of mine. i want to tell all, spill the beans. because the beans are just the pills filled with the bad oil. the bad oil, black bile, cold ice of hate & malice. now i want to swallow vitamin hate, capsule after capsule. also anyhow, i can't talk to you people, since you've killed all the kings worth being had & haven't nearly formed enough churches for the killers. fucking turns my stomach is what it does. if i wasn't already obsessed with seeing an end to your petty world(s) i'd convert right on over to the bad guy's side. by the way, i think i mentioned how only on this team will you get an answer to any of the important questions, right? then again, maybe sapience isn't held in the correct respect. i know everyone gets all crazy about the hive. when in fact it has been here for 1.5 million years & hello, you are having me inside you right now.
Collapse