oh dark! night come & blah blah blah. seriously though, brains all filled with nocturnal "god is nowhere" thinking. god is now here! okay that isn't really true. but alex is here, & so it some work to do, so i am going to make this little white box...dissappear! OH DARK! COME SOON THE NIGHT! there will be bats & such sundry accoutrements of the wicked world. oh hey, david is here too! PARTY! what there isn't any fire fighters here! with axes, waiting to chop you up. no! there aren't! go away! okay but maybe there are hackers. hack the gibson, mister plague! okay let me put all my cards on the table: i think that maybe there might be goblin foxes living in the walls. eating the crickets! i think the angels keep them as pets. which to be fair is what we in the field of biology call "the circle of life."

we all know that sephiroth is the one-winged angel in final fantasy seven. but i have to admit to being surprised to find out that cloud has been portrayed with one bat wing in kingdom hearts, looking all vincent valentiney. weird, & also, doubly weird, because it plays in to some thoughts i've been having on a supernatural aristocracy, spurred on (as they have been) by the way they've sort of been developed between me, mike, & james (& now tom, & formerly scott) in oisos. also i'm waiting for this giant fax to send, & it is being a gigantic pain in my neck. like a vampire. which apparently cloud maybe it. also, i never played that kingdom hearts game, but i kind of like to squint my eyes really hard & pretend it is the bone game. hey, wait, that is a great idea! how about making a new bone saga, jeff smith, but setting this one in space? i'd get on-board for that. 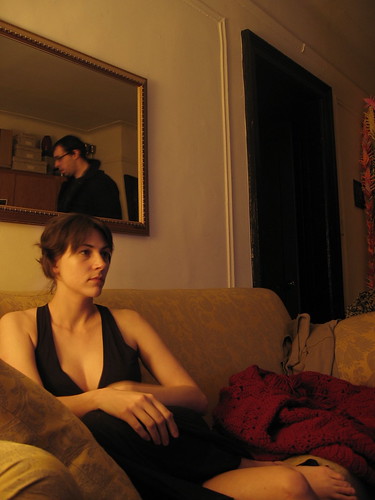 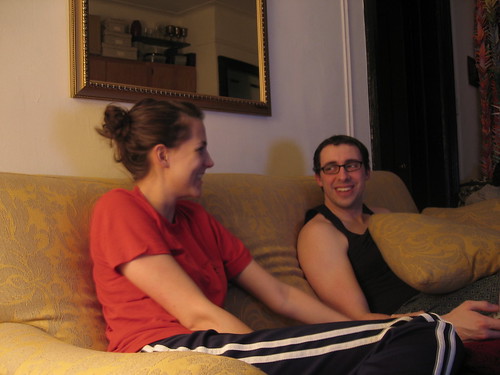 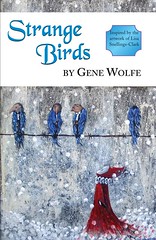 so of course by now everyone knows that i've pretty much conceded the title of greatest living author to gene wolfe. seriously, i read an article today comparing the appearances of cave bear like images in his works to sabertooth tiger images in his work. he's the actual goddamn batman. snellings-clark i also got to on my own-- i've been following her blog for a bit on account of how i like creepy poppets. so anyhow, i've sort of always been frustrated & crazed by mister wolfe's insistence on producing limited run "chap books." hey! how dare you have the audacity to support small presses & art! so when this book slid across my place i decided to jump on it. i really liked it! i mean, i am not a short story guy. right? i like borges & happily hang the "st." placard around his neck. but besides then, i'm just a novelish sort of guy. given the prolific collections of mister wolfe, i have made allowances. but this format, well. it fit in very well between the "fuck all this crap on television" & "oh no, i'm drunk" moments of the evening. also, i enjoyed the literal take on the poppets, rather than going a more fanciful route. i already knew i was going to like this, after all.
Collapse