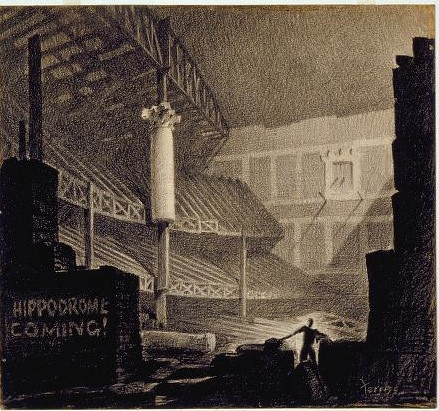 tonight's session was oddly paced. pacing! it is a constant struggle, you know? if i look at the last session as interstitial rather than introductory, it looks less wonky, but it is something for me to be aware of. pacing. beware of. the story tonight started out post-party, & with the impending sport-play by lorelai o'dragonfly. the game is kadabra, based on the way i imagine kabaddi is played, which probably has nothing to do with actual kabaddi game play. tracey was pretty unhappy with the rules i'd cooked up for her, which i understand. i sort of intended them to be more of a spring board into further statistical development, rather than using her existing strengths, but in practice it just made her feel like her character sucked. i'm still getting the nuances down to the world of darkness system, so i'm not going to beat myself up too much. meanwhile, balthazar tin-finger of the ten-eyed devils sept was wagering heavily on the men's game, while everyone else seemed oddly interested in the women's game (sort of an equivalent of foxy boxing, or so you might think). odd as in, seriously interested, not for the topic itself. a cuckoo (metaphorically- it is fantasy, & you can never be too sure) told lorelai that something was afoot, & slipped her a note...a blank note!

damocles the maimed of the sun cutting darkness sept said it first, but gaspar d'eivon brother of vol & balthazar knew it too: invisible ink! i had a prop with me, so we all rejoined upstairs to put the paper in the oven till the lemon juice turned brown. "jan," it read, "bring them to the hippo-drome to force suffage." or, well...with a debriefing of lorelai by the noble airavantha of the golden nirvana (her owner), that last word was deciphered as "suffrage," & suddenly it made a lot more sense given the elections of the doge...even though the doge-for-life was still alive. uh-oh! plus, maybe they are cheating at sports! that won't stand at all! well, airavantha suggests they go down & figure out just what the hell is going on, & offers the others (through lorelai as proxy) a variety of rewards to do so. what a stand-up guy! they know where the hide-out is, but decide to wait for someone to go there, to "catch them in the act," so they wait a day, practicing at swords. another day, & nothing. the third day, though, & a member of jan's household goes down-- a woman with dark hair & a low brow. off they go in pursuit!

the hippodrome is deep in the ancient guts of malake, almost as deep as the goblin's domain. the goblins are at war! the surface of malake has been smog covered, the nights filled with under-thunder. the exploration of the party comes across some gobs, oh yes it does: two fat bruisers with chains around both their wrists down to a pair of...dogs? barghests? you see, goblins don't bother to domesticate animals as a rule. why bother? no, these are goblins, but their faces have been cut, their bones molded with shoe horns (since child-hood!) to widen their mouths to muzzles, their hips broken to keep them on their knees. see, better than dogs! the goblin-dogs are stacking irregular, bloody bowling balls into a pyramid. with them in a uniformed gentleman hobgoblin, pinstripes & pistols & gravel in his throat. merewig hollowhaunt, captain of his majesty's secret police. meh! they go past the tower of skulls (the noses, ears, & lips already bitten off) to the guts of the 'drome.

ah! why roll willpower! gaspar is spotted, & lorelai runs out of stealth to cover for him. there are guards at the hippodrome, & they take the two of them into custody, telling them all about how balthazar started the "great goblin fiasco" in a bid for take-over. that bastard! luce comes out, a beautiful lady, the one they've been following, to quiet lorelai's fears & teach gaspar of the ways of humans. she lets gaspar go to find balthazar but keeps lorelai safe with her. they chat, so friendly, & gaspar "finds" balthazar & returns with him. damocles the maimed hops the wall, stealthy as a ninja...& lets out a quiet "whoop!" of glee. oops! he remains undiscovered, however, & eventually, their stories (kinda) jivving, are set free to go tell jan to come down below. oh, what is up in the hippodrome? it was filled with duelist's circles, where men stand, unflinching, to receive facial scars, & another sport's arena. what is spookier than sports? so up they go, members of the gougeprick hegemony watching them, & they make their way to have audience with jan demi-lion. the doorman lets them in to wait...
Collapse