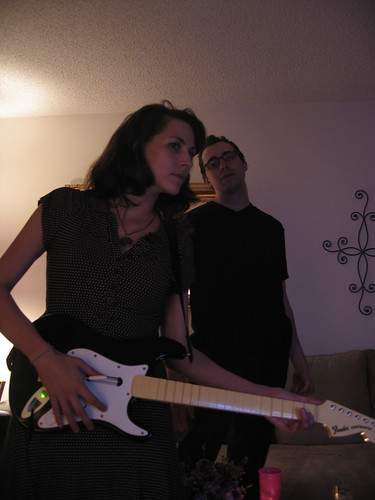 last night we went over to play "rockband" with carla & robert. along the way, i made caroline & marie become friends, because i am a matchmaker. because i am on a POWER TRIP. anyhow, i bailed out (almost missing the stop, but a dude stuck his arm in the door for me-- well done oh faithful serf!) & first we ate some roast, & then we got to the splish-splash, singing in the rain. here is a fun fact! i can't sing worth a lick, but when i would do vocals, robert kept setting it to medium! that isn't any fun! it just ends up with me sliding my voice up & down in tone jarringly, trying to keep on the notes of the music. BUT I CAN'T HIT NOTES. the guitar on easy i got okay with; i wanted to try bass on medium, but by that time, i was done! midnight, & i turned into a pumpkin. then on the train ride home, jenny challenged my subway lore & LOST. now i'm awake & prepping to work. one of the store's little elves is sick, so it'll probably be just me for the first few hours.

so the chap who did the cell has apparently made another movie called the fall & this movie is apparently AWESOME. seriously, i was vaguely interested when someone said "movie by the guy who made the cell," but i know that is because i've forgotten everything about that movie except for the cinematography. i like pretty & fabulous things. anyhow, this movie looks like the sort of dungeons & dragons game i want to run. actually, if i want to flatter myself, it looks like the game i am running. hooray for wicked horror & fantasy run amok! oh, but other than that? just a shopping list that i'm not crazy about.