while i sit here & eat my pork bolognese breakfast, let me tell you a little bit about a book i just read. well, to be fair, i read it a little while ago, but i recently picked it up again to check it against my new practical knowledge of the world of darkness. of the storyteller system, i should say. now that i've run a few (four, counting oubliette & promethean) sessions, i thought i'd see if maybe it had needful things, or at least useful things. turns out, not so much. it is precisely the kind of book i don't need: prepublished powers & rules shuffled into different orders. no, i don't need a beastiary of spirits! an actually beastiary would be nice, but spirits are all pretty abstract. & sure, there are some new spirit powers, but they are even caveated with "these are tested for balance." which is fine for what it is, but of less use to a world-builder than they might be to just a story-teller. some of the back story is interesting, & some of the spirits are even well imagined. i just don't need that. i did like how the "monster" bit came with alternate origins, pick & choose. i appreciate the open nature of the new world of darkness. but then, i'm not really running a game that might need this. you know what i mean? it might be fine for you, but i'm not interested. 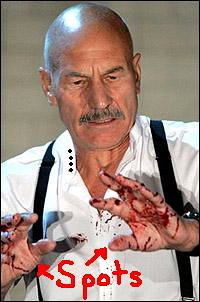 last night ryan & i went to bam to see patrick stewart in macbeth. & it was quite nice. there was a bit of muddle finding the right building, or rather post-finding the building we sort of ran around like chickens with our heads cut off trying to find a place for a drink. we ended up at thomas beisel, which as it turns out is a nice little viennese place. it occurred to me that ryan would probably quite like a weisse beer, & he did. & the people next to use were served their food in...three minutes? it seems like it might be the perfect pre-show venue. after that, back to the harvey theater. we had balcony seats, which. let me tell you about the venue. the harvey theater is less a bowl & more an pill-shape, so the balcony seats are like, three stories straight up. like climbing a ladder. all these old folks were totally slugging it like no problem! it was a good time to be an old person in brooklyn. apparently, they have cocoons. our seats were pretty nose-bleed, which i tell you only by way of explanation, not complaint. we had a pretty good view of the stage! not so much faces, but blocking was really clear.

i liked the production, not unreservedly. first off, stewart is pretty good at shakespeare, huh? there were a couple of times that i thought his classical training sort of worked against him (like when he pretended to be a bear!) but the times he was stand out good were far more prominent. like when he crumbled up that cigarette over the guy's head. lady macbeth...whatever. i don't really care for lady macbeth, the character. i did like when macbeth was freaking out & she's all "no, no, it is cool, he just does this sometimes." yay! the rest of the cast...well. i think the soviet style of costumes sort of worked against them here, because all of the characters sort of...blurred. i haven't read macbeth in a while, so. it wasn't so much confusing as it just took away some of the ease of recognition.

the weird sisters. okay! i take note of these ladies. they are okay in my book. first; the costumes, especially the nurse costumes, were really quite awesome. both distinctive & bland, which, how can you do that! but they did. the voices...not so great. they were...echoed? possibly even pre-recorded? it didn't come off spooky, just sort of "wrong." not "off," or "disconcerting," but "wrong." still, i liked them, & i liked their use on the stage; they were sort of like the emcee from cabaret, if not as much; they were the serving girls, or the nurses, or...any time there were non-speaking female roles, it was them.

the stage. okay, so this is the thing. first, as i mentioned, all the costumes were stalinist. whatever. there was an old-fashioned elevator. that was great. the walls of the stage were television screens. when it worked, like in dunsany wood when it showed just anonymous dense foliage, it worked. when it showed tons of marching soldiers...not so much. the sound i liked; i like the percussive invasion of it, & i liked the use of crackling, snapping electricity where other productions might have thunder. & i really liked the front-&-forward presentation of the sink. that was pretty solid.

probably the best part of the production was the ghost. okay, the murder of banquo takes place on a train car, with, you know, sitting people as the train car, & then after he is shot he gets up & walks off into the elevator. next scene, right? dinner at the macbeth house. there is the aside, then back to the meal, yeah? in the middle, a bloody, white faced banquo comes down in the elevator, jumps up on the table, & runs at macbeth, who screams &...stage goes black, intermission. when we come back (i had to chug my cocktail to be allowed back in), the scene opens at the beginning of dinner, but this time the aside isn't out loud, & when the elevator comes down, no one is in it, & then macbeth is shouting & screaming & it was good.
Collapse