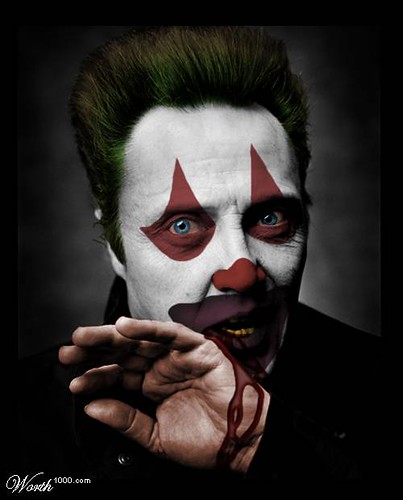 Open to: All, detailed results viewable to: All. Participants: 19

let me run this by you: should my game have have a race of evil clowns?

photo by sperdush for worth1000.

i should have something to say to accompany this arresting graphic, but i do not. can i add, simply, that this "super hot sandal" should be a part of the wonder woman & wonder girl ensemble? boomerang crown, check. golden lasso, check. bullet-proof vambraces, check. awesome sandals, check. does she have a magic girdle? she should. & an invisible jet. making wonder woman able to fly is a bad idea if only because it takes away her invisible jet, which is an important piece of ancillary character development. i mean, it was recognizable. people knew about it, outside of comics, same as people know about the batmobile. i think she needs that. needs to have accouterments that become icons. like the spinning around to change costume. that is a nice trick. i was thinking that the thing to do would be to...well, okay. in a post-crisis world. make all the gods (greek, norse, indian, aztec, everybody) have been real...but now dead. having replaced them with the kirby-wrought new gods. have wonder woman (& captain marvel) be the champions of the old gods. that hooks wonder woman into the mythology in a cool way, i think. i'd also have her totally think of all the other capes in mythological terms; calling superman "demigod" & batman "hero" & all that. i really like her mythological roots: she can totally fight medusa & the hydra. i think she should; how great is that? i'd like to see her mythology incorporated in the dc universe, not just as an add on. i want her to bemoan the sinking of atlantis, & for themiscrya to have a brisk trade with it; for her to take diplomatic missions to gorilla city & break bread with solovar. i want her & aquaman to be aware of the horrid outer gods that sleep below the waves; to be aware of the strange things in skartaris. i mean; superman & batman's impact is felt in all the dc comics, & i think wonder woman deserves that as well. i really support wonder woman as one of the "big three" but i don't think it is true yet. i like that everyone keeps pretending that it is, as that should help cement her there, but i think she's still got a way to go. 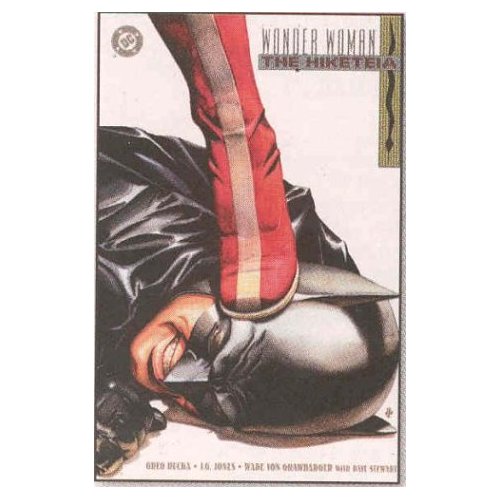 what is with me & wonder woman's feet? i don't have a thing for feet! but moving on. i also think that wonder woman should be able to kick the crap out of the batman. same as how everyone just accepts that the batman can kick the crap out of superman. i think it should the exact same. rock, paper, scissors. the batman can defeat superman : superman can defeat wonder woman : wonder woman can defeat the batman. that should be the checks & balance of the dc universe. & yeah, i think superman should be able to defeat wonder woman. i sort of hate it whenever wonder woman fist fights superman. creeping her power level upwards doesn't make her a better, stronger character. she doesn't have to be physically powerful as all that! i like it when she's a warrior. sure, she won't win a punch-out with superman. but what, the batman is the only guy with tricks up his sleeve? i also think wonder woman should be knowledgeable about every weapon known to her. i think she should go over to the fortress of solitude, or the batcave, & want to try out all the weapons there, from mister freeze's cold gun to thanagarian nth metal swords. she should compete in archery with green arrow. she should wrestle power girl. which is another thing: i think she should be the exemplar of good natured competition. she should totally try to beat people at things, & be gracious in victory or defeat.

do you remember that time antonio came up to me & was like "i have decided i'm going to be into the insane clown posse this summer. i know this is a bad idea, but i'm going to do it. we've got this job, working in a steak house & we have nothing better to do this summer. so i'm going to listen to all of the insane clown posse records & buy mecca wear. i am going to do it." then we got into a car that had a license plate that said "boba fet" & drove away. this is a true story. the car wasn't antonio's: his car had a hole in the floor where you could see the road. it was a camero. the guy who owned that car, real name unknown, alias "the goat", also had another car, a black one, which had a license plate that said "vader 1" & he only ever played the imperial march when he drove around in it. this is a real story of things that happened to me. (when i mis-spelt "lisence" the spell check recommended me: melisent, mellisent, millisent, melisenda, melisent's...the fuck!?)
Collapse