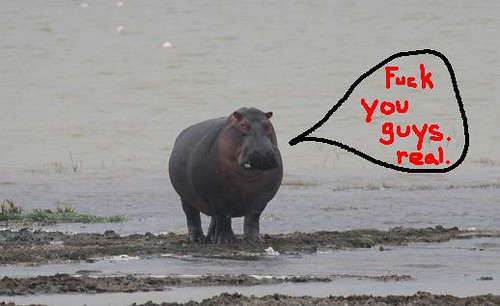 ...& do they hate whales? ...what about radioactive whales? 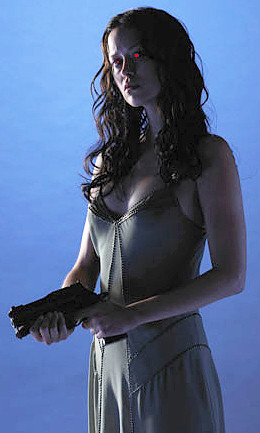 watched terminator: the sarah connor chronicles. first two episodes. my mood going in was to compare it two the very, very awesome battlestar: galactica & the frankly pretty unwatchable bionic woman. with high's & lows like that, i figured i had a pretty good range: i wasn't expecting a bs:g & would just turn off a bionic woman (even with katee sackhoff, also known as the only bright star in that dismal sky). it stacked up at a...."meh." it certainly isn't as insultingly bad as bionic woman, & it certainly is no battlestar. what it does have is...well, summer glau. & what it doesn't have is...any other interesting actors, & lazy, wretched writing. oh, it also has time traveling fighting robots. a not inconsiderable factor. though time travel is sure used as a crutch for people not wanting to...you know, have an interesting show. why bother when a little time travel can make it modern day!

really, it is summer, as the "good" terminator, who floats the show. she's got "it," the extra x quotient, the it factor. john is...an annoying teenager? i'm excited to see if this christian bale rumor pans out; i'd like to see a john connor i could see the human resistance giving the slightest fuck about. & sarah....oh sarah. i feel bad: them is some shoes to fill. how great is sarah connor? how great is it that one of the ultimate "geek fights" is sarah connor versus ellen ripley? fuck predator versus alien (alien, by the way). sarah connor in the chronicles manages...to be a "tough mom." she seems kind of held back as a character; she isn't kicking ass, she's...protecting her cub. plus, she isn't ripped to all fucking hell. now, sure, i know, she's not in a mental hospital with nothing to do all day but push-ups, but when has reality mattered to fiction icons? sarah conner should be able to bench press me. she should be shooting robots with much more "fuck you, of course i know how this gun works" than she does. i could buy her as a transitional sarah, between terminator & judgment day more than i can as coming between two & three. & what is the deal with terminator 3? it is an alternate timeline? bullshit! that icbms-criss-crossing-the-sky ending is great. don't wimp out. sarah connor wouldn't.

i said before that paying twenty bucks for an advertisement, even one that i would theoretically want, is a bit much. maybe that sentiment was echoed, & heard? because at least this thing contains big swaths of art, something to have if you wanted to. but lets put that aside. nobody really wants to talk about value. we're all addicts, so lets get to the smack. i know i want to.

i am getting pretty fucking excited about this new edition. sometimes these guys just say things that are, well, getting my hopes up. simple changes in design philosophy that show that wizards is paying attention. now, i don't always agree with the changes proposed, but i do tend to agree that changes are needed, & i can see why they are doing what they are doing. i (for instance) like the "great wheel" but i totally hear their critiques of it, & i respect them having the guts to scrap it & go for something new. besides, & i've said this before: they can always come out with a "great wheel/planescape" book later & shill it to me & my ilk. win-win.

what particular changes am i talking about? how about this as a broad stroke: instead of a challenge rating six meaning that four sixth level characters could beat the thing to death by only breaking a sweat, now a party of four sixth level characters is expected to fight four challenge rating six things. it is the sort of simple, absolutely clear in hindsight things about third edition, & changing it is a good thing. good for them. i'm also excited about solo monsters & immediate actions...you know, instead of fighter goes, rogue goes, cleric goes, MONSTER GOES, wizard goes; or as i like to call it "how come sturm only fights honorably when he isn't fighting verminaard?" this time when the fighter comes into hit the green dragon, it can (as an immediate action) dart forward as the fighter approaches to try to envenom him. see that? rules & flavor.

speaking of dragons: fuck brass & bronze dragons. FUCK THOSE GUYS. apparently, wizards agrees. seriously, who can keep track of shit like that? so they replace them with iron & adamantine dragons. great! okay! they say iron is the "white dragon" of the metallics. the mindless, savage one. hey, can we shed the "chromatic dragons have a shitty dragon, metallics have an awesome one" syndrome? along with the "scaling cr by colour" thing? i'd be happy if we could! also, don't you dare make the adamantine dragon tougher than the gold. that is so nineties, so "kewl," that i will barf, & no one will ever see one in the field. highest ac, okay, that is fine. also: apparently the metallics won't be "good" so much. they'll be more the "controlling" type. ruling empires & shit. i think that is smart.

oh...giants as elemental ur-people. weird. did everyone catch that bug at the same time? is it just the robotech generation growing up? seriously, i feel like all i ever see is titanic protocultures. hell, i've got it going on in my game. anyhow, the way they sell it is pretty good; i want to see them pull it off. i was deeply unsatisfied with third edition giants. oh, & the formorians all having evil eyes? now that is smart building. i like that a lot.

gulp down some wine, & continue. feywild, shadowfeld, whatever. i'm okay with this? i kind of don't care. it is kind of weird to be sort of "of like mind" with them. i have the "spooky faeries" going on in my game. i have the "dark world" impulses. i get it. weird. my age cohort colliding with the designers, maybe? anyhow, i could see it sucking? but i also totally understand. the positive energy plane is AWESOME for how little sense it makes, but from a game design, requiring a positive energy plane to balance out the negative energy plane is...dumb. i like the crazy stupidity of the old planes? i also like the crazy stupid cosmologies of the greeks & the thinkers of...well, thinkers all the time. dark matter! whatever! nemesis & marduk!

gulp gulp! demons & devils! i think they are more well defined than the wizards team gives them credit for. shame to get rid of the erinyes (the succubus is geting "diabolized!" instead of demonized) since i just started grooving on them post-fiendish codex. hope they're still around. anyhow: you can put the demons & the devils anywhere. they probably have the best identity of anybody in the game, even counting the chromatic dragons.

what was i saying? devils & demons. the have their niches. make sure you've got orcus (he'll be in the monster manual) & your demogorgon & your everybody else too. promote asmodeus to a god, why not? it explains why the devils want souls. not shabby. & make the yugoloths demons! i don't care! you do whatever you want. can you give pit fiends pitchforks though? & make sure you don't care too much about this "elder elemental eye" bullshit. no one actually cares.

far realm, okay, i like it, more cthulhu, sure. go! tentacles!

last but not least, though: angels. so, there are always angels. i'm particular about my angels. i have a "thing." i'll put it aside. i always do. i've been trying to look at american folklore as its own thing lately. it has been profitable. anyhow, angels. in fourth edition, all the gods will have angels. evil gods, good gods. whatever. & those angels will be...well, robots. you know. perfect extensions of will & function. so i'm inclined. they'll be...faceless? which is a weird call. frankly, i think they should keep the solar...the "slaying" bow terrifies all players. angels. i think about them a lot.

Open to: All, detailed results viewable to: All. Participants: 16

it seems to me that the "rebel yell" & "ululation" are