china miéville doesn't like happy endings. i do, so i guess we get into a little bit of trouble there. that said, it certainly wasn't as dismal as perdido street station was. roads ran their course before the end. an important theme of the work. also, the "kitchen sink" approach that both of the books share worked a lot better in iron council, as the world was open, not closed. he could spread the weird out instead of cramming it into one place. i think that room to breathe, & the establishment of new crobuzon let him not just keep throwing shit at the wall to see what stuck.

i actually am surprised that he's english, but i guess i shouldn't be. there is a socialist spirit in europe that clashes with the american influences in britain, ain't there? i mean, his opinions on labour are pretty clear in this book, but there is also a sort of resentment at the inevitability of the government smach-down. maybe it is that he's such a modern writer? actually, what am i talking about? no european books are any fun!

still, i liked this book a lot. the beginning of it was a bit relentless with mood, which is an improvement with the same situation at the end of perdido street.... plus, the mood is more the faded desert crawl confusion. it worked. then judah low's story, instead of being utterly boring, as you might think it will be, is in fact really compelling. & the actual iron council? is really great, really cute & "new myth." the fact that miéville can turn a phrase (blitzbaum? oh snap!) is a significant bit of icing. 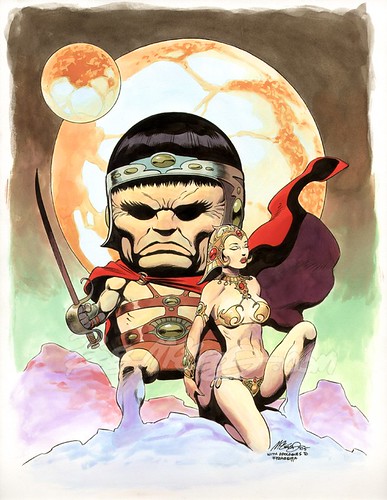 i would totally read planet MODOK. so totally.

so, today was no pants 2k8. it was an awfully sizable affair, full of brimstone & gunpowder. the only person from my immediate circle who didn't flake was

toughlad, & we met up at foley square with about a thousand other people. easily a thousand; i don't have much of a head for quick counts like that. they were all over the place! enough so that the no pants train riding was spread out between the green line, the yellow line, & the red line. i was in the latter group, in group nine (it was by the last digit of our cell phone numbers), which put me in the second to last car. i was too slow on the draw to be in wave one, but i put myself right at the forefront of wave two.

the basic breakdown was thus: we, all of us red liners, boarded a 2 train at the same time. in exponentially increasing waves, we'd take off our pants, & exit the train. that is, at the first stop, one guy got out. the next, two of us. the next, four, & so forth. which meant the real train was the train behind us; that was the one that would be, little by little, overwhelmed with pantless riders. it went off without a hitch, with the possible exceptions being that a) media was swarming the event (even in-line skate wearing paparazzi!) which meant people knew "something was up" & b) we just totally outnumbered the pants-wearers pretty quickly. still, there were plenty of people flipping their top. as a kicker, we all (the red liners) got out at times square & transfered to the yellow line, which is when we really "freaked the norms." that was when the disparity was most equal, & people the most surprised. just a big, long line of pantless people walking through the station. i fielded the usual questions: "what day is it?" "uh...saturday, i think." & "why aren't you wearing pants?" "i'm on my way jogging!" or whatever.

afterwards, there was a big congregation of the pantless in union square. it got pretty boisterous, with people even being converted to the pantlessness. mind you, it was pretty fucking cold by now, but in a cluster it wasn't so bad. there were more exchanges "why aren't you wearing pants?" "(turns to person next to him) why aren't you wearing pants?!" & even some interference: "what are you protesting?" "we're protesting darfur?" "why, what is going on in darfur?" "hahah" "darfur massachusets?!" but soon enough we trickled our way down to a burger & beer joint called the stand. we took up about half of the restaurant, & some of our fellows we're over-excited, but generally taking over a place with your tribe, even your temporary one, is a lot of fun. peter even straggled in, too late for the pantlessness, to join us. oh, & on the way home i yelled at a teenager. oh, & all the pretty girls were totally eyeball fucking me, especially the pretty blonde girl at second avenue. so, i'm the winner. i do have other bookshelves, but this has been the project!
i cleaned out all of the papers crammed into my bookshelf, today.

what do you really want me to say? it is a collection of photographs of genuinely fucked up shit. not that sort of shock nothingness-- this is some genuinely "disturb the human condition & make the viewer uneasy" action. i sure like it! you know, i'm pretty easy around that sort of thing, while still being able to be part of the fun. i think i've mentioned the (sort of below board) collection at kent. back when i was studying forensics, we had a section of the lab to ourselves. by "we" i mean those of us who didn't mind getting our hands dirty-- or even better, didn't mind getting them wet in rotting flesh. that turned out to be me, a cute sorority girl, & a guy with a tattoo of the muscles of his arm. or well, that was one team; cortney had another team or whatever. anyhow, we defleshed skeletons & the like in a back room, in a tub, & the room itself was full of jar-babies; cyclopes, four-armed guys, all manner of fatal birth defects. the mutter museum is like that times ten. hooray!
Collapse